Because most runners can’t imagine not being able to run, they tend to ignore the warning signs of impending injury.

Running induces what’s known as the “runner’s high,” brought on supposedly by the release of exercise endorphins that in turn help to improve moods and lead to a general feeling of well-being. A lot of runners say this is why they run, because running makes them feel better, while not running results in just the opposite – feelings of depression. Whatever it is that runners believe about the effects of running, one thing is certain – there is something about running that keeps those drawn to it from stubbornly refusing to take time off when a chronic injury is looming.

The Slippery Slope of Chronic Pain

Unlike acute injuries, which occur suddenly as a result of some specific or traumatic event, chronic injuries develop slowly and are long-lasting. In runners these injuries typically present themselves in the form of subtle, but nagging symptoms. But because most runners can’t imagine a worse fate than not being able to run, they tend to ignore the warning signs.

Several years ago, when I was training for the San Francisco marathon, I started experiencing minor pain and tightness in my right hamstring. As my training progressed, so too did my level of muscle pain and tightness. I nursed the symptoms as best I could. I iced, I took anti-inflammatory medications, and I took days off, resorting when necessary to lower-impact activities. None of these things, however, prevented my hamstring from completely tearing during the marathon. The end result? Five months of physical therapy and no running at all.

The Consequences of Ignoring Symptoms

Some of you can relate to my experience. You’ve been aware of some niggling joint or muscle pain, but you keep telling yourself it’s nothing to worry about. The pain doesn’t disappear, but because you’ve already invested time and money into an event that you feel you “must” complete, you continue to run.

Or, maybe you’re not even training for an event. Maybe you’re dealing with an overuse injury, but you’re so afraid of losing the fitness gains that you’ve so far achieved that you’re reluctant to take time off. Alternatively, perhaps you’re one of those runners who refuses to acknowledge the early warning signs of an injury because a) you’re as dependent on your running routine as you are on your daily coffee, or b) you believe that running is the most effective means of keeping your weight in check.

Whatever your reality may be, it’s obvious that when you (and I) ignore signs of a potentially serious injury, we are setting ourselves up for a far worse predicament than if we stop running altogether. Unfortunately, statistical evidence (relative to the number of runners who sustain overuse injuries each year), suggests that many runners are unwilling to rest when rest is what they need. If you’re one of those runners, and you do end up with a debilitating injury, here are some things you can do:

Treat the Injury: Consult a physical therapist, but more importantly follow through with the recommended treatment. (Runners who typically don’t incorporate dynamic stretching and strength work into their overall exercise routine are probably also unlikely to follow through with physical therapy exercises.) Ice the inflamed area several times a day until swelling is reduced, and if necessary take an over-the-counter anti-inflammatory medication. Accept that complete rest may be the best option.

Don’t Stop Exercising Altogether: Fill your regular running times with other cross-training activities that won’t hinder your recovery. If low-impact exercise machines (elliptical trainer and stationary bike, for example) don’t cause you any pain, then use those as a substitute until you can run again. Or get into the pool and try pool-running.

Use the Time for Learning: If your injury is so bad that you are forced to abstain from all forms of exercise, spend your recovery time educating yourself on how to prevent chronic injuries. In addition, develop a new mindset that will motivate you to take better care of yourself once you are able to get back to running.

Don’t Ignore Your Nutrition: Nutrition plays an importantrole in either advancing or slowing down the healing process. If you want to speed up your recovery, make an effort to eat mostly whole, natural foods, and especially foods with anti-inflammatory and healing properties such as dark, green leafy vegetables, dark red and blue berries, and high-quality protein sources (fish and seafood, nuts, legumes, and seeds). 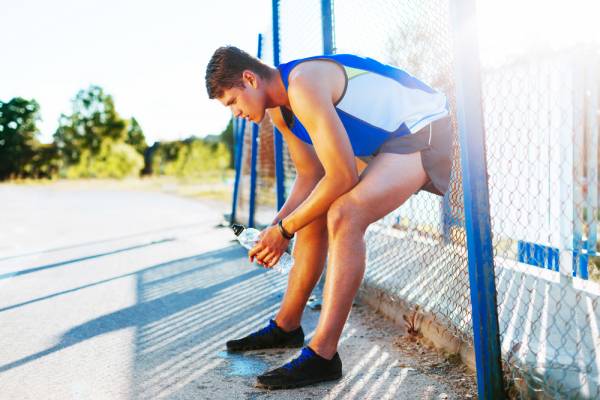 The best advice of all however, and by far the most difficult, is that you simply heed the early warning signs of an injury and stop running until you can run with minimal or no pain. A brief running sabbatical is much easier to endure than a long-term (and possibly indefinite) one. Listen to your body so that your runner’s high doesn’t become your runner’s low.