How to Strengthen the Abductors and Adductors for Hockey

I am going to teach you how to locate weaknesses that lead to overuse injuries. These issues can be addressed easily by training muscle groups responsible for maintaining hip stability.

Hockey players, pound for pound, are some of the toughest athletes in the world. But no athlete is bulletproof. These days, the game is faster and the players are bigger, but the intensity of the game remains the same. As a result, injuries are becoming more common.

Hockey players, pound for pound, are some of the toughest athletes in the world. But no athlete is bulletproof. These days, the game is faster and the players are bigger, but the intensity of the game remains the same. As a result, injuries are becoming more common.

For instance, some NHL clubs have nearly a hundred man games lost this season. Man games lost are how many games a team has played with injured players out of the lineup.

While an athlete can do his best to prevent injuries from occurring, there’s no way to stop catastrophic injury in a sport like hockey.

In this article, I am going to teach you how to locate weaknesses that indicator poor posture and generally lead to overuse injuries. These issues can be addressed easily by training specific muscle groups responsible for maintaining hip stability.

In hockey, the known weak spots for athletes are the muscles the laterally extend and flex the hips.

On the hip extensor side, the adductors (brevis, longus, and magnus) aid in pulling the legs together. These muscles are even more susceptible to injury due to them not being primary movers. Have you ever pulled your groin? Usually one or all of these adductor muscles have been strained. 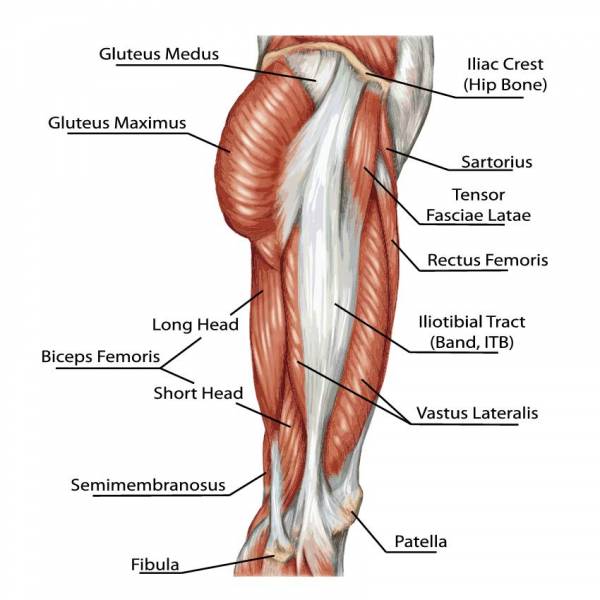 Unfortunately, injuries to any of the abduction or adduction muscles can be time consuming to heal. Again, the nature of the beast is that these muscles are not primary movers. They work as antagonist, synergists, stabilizers, and neutralizers.

The primary movers, the largest, most actively engaged muscles handle most of the workload responsible for creating powerful movements. If a primary mover becomes inhibited, then what occurs next is natural.

The secondary muscles kick in, but they’re not capable of handling all the stress. Muscle strains and tears occur or, worse yet, ligament sprains or tears, as well. So how can we prevent this culmination of injuries?

First, hockey players have to focus on training all of the muscles in the legs. Focusing on just the primary movers is a recipe for disaster. Secondly, since hockey is so demanding on the lower body, players should train the lower body less while in season.

Adequate rest is imperative to injury prevention. Many strains come from overworked and underpaid muscles. This brings me to another point. If you aren’t feeding your muscles the appropriate fuel, then you are yet again building for a volcanic eruption.

You’ll probably ask, “If I’m not training with heavy weights how can I make the adductors and abductors stronger?” Remember when I said these muscles aren’t primary movers?

Second, in isometric work the muscle length is not changing. This results in a lesser build up of lactic acid and also helps to shuttle lactic acid out of muscles where it has accumulated from a hard skate. A combination of a healthy diet, isometric training, and foam roller will speed up the lactic acid process. 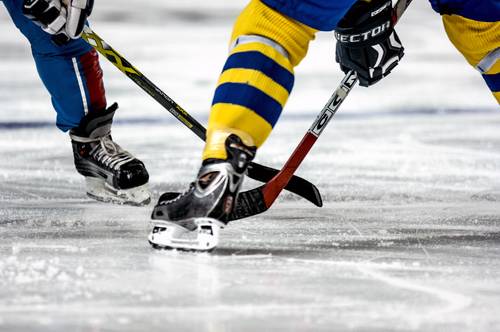 So now, we know what muscles are weak points for hockey players. We also know how these muscles work and the best way to train them while you’re still in season. But what exercises should you be focusing on to build the adductors and abductor complexes?

Here’s one exercise for each group. I highly suggest you begin slowly, especially if you have not trained these muscles previously. While in season, I would not train the leg groups more than twice per week, with a strong focus on plyometrics, speed, and agility training with band work. Hockey is an explosive game, so movements should be treated as such.

In these movements, you can focus on a 1-3-1 protocol. This means 1 second to finish the concentric phase, or contraction phase, 3 seconds accounts for the extending phase, and 1 second of rest before repeating a repetition.

If you’re just beginning, 2 sets should be sufficient. If you’ve previously trained these muscles, then a set of 3 is suggested in season. Keep to a repetition range on 8-12.

Work both the abductors and adductors in the same exercise. Starting with feet together, knees and hips in line. The band should be around the outside of the ankles, resting low on the tibia. While squatted, keep the core active, chest open, back neutrally held, and shoulders relaxed.

Step forcefully, plant the stepping foot, and allow the trailing foot to meet the lead foot slowly under load. Once the feet are together again, complete another step under the same protocol. Once you’ve reached your desired number of reps, return back the opposite direction to you start position.

Here’s another great exercise. Attach the cable ankle cuff to the furthest ankle. Lie prone perpendicular to the cable. Bend knee to ninety degrees so the attached ankle crosses over the resting straight leg. Adjust the positioning of legs slightly away from cable pulley so a slight stretch is felt in the hip. 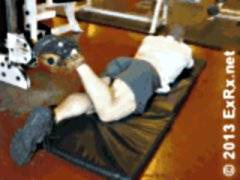 Keeping the knee of attached leg bent approximately ninety degrees, pull the cable attachment away from pulley by rotating the hip as far as possible. Return leg to original position toward pulley and repeat. Place the ankle cuff on opposite leg and continue lying opposite direction. (Click on the photo to the right for a full explanation of the movement.)

The skater lunge jump is a fantastic exercise for explosive leg strength. Make sure to keep your chest up, core active, and your back flat during this exercise.