Is Jiu Jitsu for You? You Decide

In my mind, the only person who can answer the question, “Do I belong in BJJ?” is the person asking it. It all boils down to the answers to three questions you need to ask yourself.

My business partners and I just finished another successful Women’s Grappling Camp over Veterans’ Day weekend, this one hosted by our friends at Charles Gracie BJJ Academy of Reno/Carson City. More on that in a future story, but for now, I want to share about a phenomenon I noticed there that I think has relevance beyond the people I talked to about it.

I am familiar with the competition scene, though it has been more than a year since I have competed. My business partners are no strangers to competition either, representing among them two black belt world champions and a purple belt masters/senior world champion. This obviously influences our orientation to Brazilian jiu jitsu and shapes the conversations we have with each other, with our coaches and teammates, and, notably for this story, with the women who honor us with their presence at our camps.

The specter of competition prompted an important realization for me during this most recent camp, though. I had known that there are plenty of people who don’t compete and have no interest in doing so. Indeed, probably the majority of practitioners do not compete regularly if at all, content instead to work on “solving the puzzle,” as I have taken to calling it. There is no actual solution to the puzzle of BJJ, of course, because it is ever changing and developing. It expands like the universe and folds back on itself more and more as its history lengthens. But pursuing fitting even a small number of pieces over a lifetime seems to be motivation enough for many.

Of course, this, like anything else, has implications for our growth and development. With respect to competition, my personal opinion is that everyone who loves grappling and is capable of doing so would benefit from competing at least a little, to add layers to their jiu jitsu education. If you have a chronic injury or have a high-powered job that prohibits that kind of activity, that’s one thing. But if you are reluctant to compete because you fear the unknown, that’s another thing (and also the topic of a different story).

But all that being said, here’s the point: despite the argument that competing helps us get better at BJJ faster, participation in competition is obviously not a requirement for participation in BJJ.

Or is it obvious? During camp, I had several discussions along the same theme:

These are all fine and reasonable comments, which reflect the fact that each of us has a different journey in jiu jitsu (and as in jiu jitsu, so in life). But what gave me pause were the questions that followed these observations about training preferences and habits: 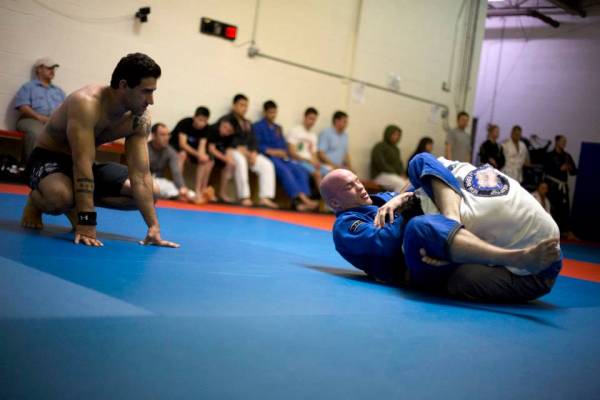 It troubled me that people were questioning themselves, wondering whether they should be taking up space in the academy if they weren’t going to use that space to get ready for a tournament. I suppose the questioning was prompted at least in part by a discussion we had as a group about competition – how to prepare for it, how to experience it if you are relatively new, how much the lessons we derive from it relate to the lessons we need to learn in the rest of our lives. I had thought/hoped the latter point was driven home, but I later learned the discussion raised questions for some in the group.

In my mind, the only person who can answer the question, “Do I belong in BJJ?” is the person asking it. It boils down to the answers to three other questions:

Only you can answer these questions for yourself. If the answer to each of them is yes, then you know what you must do: train as much as you want to. If you have one or more “no” answers in there, though, then you might need to do some soul searching (for the first and third questions) or consult a physician (for the second one).

The point is, no other person can decide for you whether something is right for you. Many people will try, as evidenced by the comments of some campers that at various times in their grappling journeys others had tried to dissuade them from continuing. I’ve experienced that myself, and I’m sure others have had people in their lives try to discourage their love of BJJ. But they don’t get to decide what’s right in your life, what your jiu jitsu journey should look like, or what your ultimate BJJ goals should be.

So the next time you look around and ask yourself, “Do I belong here?” – whether it’s at a grappling gym, a high-powered office, or any other context that may feel a bit daunting or intimidating – remember that you already know the only answer that matters – yours.

Have you ever been in a situation where another person tried to answer this question for you? How did you handle it? Post your experiences to comments.