Make Linear Progression Work for You

Never forget to trust the process as you ascend to higher heights.

In the case of linear progression, you must break this rule. For a gym goer, the gradual process of adding weight is an expected plan to follow in order to make noticeable gains. In this article, I’ll go over what linear progression is and how it can provide some usefulness for your goals.

From middle school math, we understand that as we add 1 to the X-axis there will be a noticeable increase in Y. Meaning if we were to chart a linear graph it would similar to figure 1, below.

Between exercises, we should be attempting to increase weight in a similar fashion. This creates an “overload” response. Overload is defined as loading to excess. It is the ability of muscle tissue to exhibit near maximal tension to excess.

However, in the case of exercising, exposing muscle continually to excessive stress elicits an “adaptation” response. Stress, in this case, provides a great stimulus for growth. This response is formally called “general adaptation syndrome” (GAS)—which according to Hans Selye (1972) is used to describe short-term and long-term reactions to stress.” The reactions are as follows:

As one increases the stimulus that causes a demand on the muscles, they grow, become denser, and increase in biomechanical and neurological efficiency. This is important in understanding why one might get better after consistent weight increases and consistent use of particular muscle groups but, as we continue to ascend the proverbial exercise ladder, we develop a resistance to growth because the muscle has become smarter. Hence, there is a plateau period which looks similar to figure 2, below. 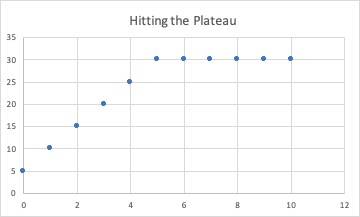 Furthermore, this allows us to understand why we might encounter a phenomenon called “fatigue.” Fatigue, as Mark Rippetoe explains in Practical Programming, is “defined physiologically as a reduction of the force-production capacity of a muscle.” My clients will tell you that they are training harder than ever with me and reach the wall a lot faster than on their own.

Fatigue is highly specific to the task being performed and, in the case of exercise, can range from squatting to box jumps or even skipping. However, expose yourself to prolonged muscle fatigue and this translates into another phenomenon called “overreaching.” Rippetoe also explains “the cumulative effects of a series of workouts, characterized by a short-term decrease in performance—depressed mood, pain, sleep disturbance—require two weeks to recover from.”

Where I disagree with this is in the case of advanced lifters because recovery can take even longer. This also doesn’t account for those with health problems and assumes that the individual is healthy and is at his or her ideal for lifting without much concern. Furthermore, this doesn’t account for individual recovery time, as some may be faster at recovering than others. What do you feel like after a hard week of lifting?

I’m not getting any stronger! Start small, learn how to work from one push up to two push-ups, and utilize assistance exercises such as machine assisted dips and planks. Gradually progress, and if need be regress, for a short period of time in order to work on form problems which can make the exercise itself biomechanically difficult for you.

I got injured—help! First, find the source of the injury. Is it your shoulder? Elbow? Lower back? Secondly, determine what part of the movement did you fail at and when did you start experiencing symptoms related to the pain? If need be, take a de-load phase in which you lift at sub-maximal levels anywhere from 50 to 70%. If it’s a serious injury, avoid lifting and attempt only bodyweight exercises for a short period of time then regroup, record, and resume for your next workout.

I’m not seeing any muscles! Remember, the kind of training you do determines your body’s response. The gym doesn’t become a remedy for poor eating habits and training in a non-hybridized fashion doesn’t “shock” the muscle. Instead, you’ll stay in muscle limbo until you change something about your training and/or nutrition. Seek a coach and then pay it forward to someone else.

Tracking Your Progression Is Beneficial

So you started a new training regimen and you’ve committed to the gym. Now what? What I suggest most (healthy) individuals do is begin with the basic body movements: the squat, push up, pull up, dip, Romanian deadlift, glute bridges, planks, shoulder presses, and cobra.

As a coach, these movements give me the most basic understanding of how a particular person moves. Performing an assessment on oneself such as the plank, wall sit, push up, body weighted squat, wall push-up, TRX row, inverted bodyweight row, glute bridge, and overhead dumbbell press is viable because from there you can work forward instead of backward.

Create a plan and write down your progress—this will make it simpler for you to see where you were and how far you’ve come. This way you can determine what you can improve and what is holding you back. Never forget to trust the process.

Lift with love my friends!