In a new study, researchers found a dramatic increase in protein intake didn’t have much of an effect.

When it comes to protein consumption, you’re likely to hear opinions all over the place, from the “it’s all supplement company propaganda” camp to the “more protein is always better” camp. A study in the Journal of the International Society of Sports Nutrition compared a fairly normal protein intake recommendation to an extreme one to see what would happen.

Forty resistance-trained men and women were chosen for the study. They had a lot of experience, averaging nine years of training, and also worked out quite a bit, with an average of 8.5 hours per week spent in the gym.

Now, this study didn’t have the greatest precision, which is a good and bad thing. The good of it is that it represents as close to what people might actually do in their regular lives with the general instructions, “Don’t change anything except the protein.” Regardless, some of the other nutritional factors did change, like carb intake in the high-protein group. To shake things up further, ten of the subjects dropped out.

Even worse, the supplement companies that provided protein powder for use by the high-protein group sponsor the Journal’s conferences. That might not sound like a big deal, except the primary researcher is also the CEO of the Journal. I’ll let you read the results here and decide if there was any bias.

However, that’s not the biggest surprise. The real conclusion of this study is the fact that there were no changes in fat mass, which is pretty shocking. The high-protein group consumed an extra 800 calories per day, every day, for eight weeks, and didn’t get significantly bigger in any way. In fact, they even lost a little bit of fat.

Perhaps for an individual who needs to add more calories to his or her diet, protein might be a safe way to do so without the worry of storing extra fat. The researchers noted that for less experienced trainees, the results would have likely been more favorable for the high-protein group if the diet was higher in protein but similar in calories. 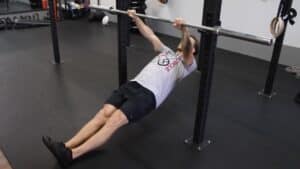 How to Do the Inverted Row — Benefits, Variations, and More