Want an easy way to increase core stabilization in the central zone and decrease fascial tension in your back at the same time? Say yes.

Resisted quadruped rock (RQR) is the answer. A simple and effective way to release tightness in the thoracolumbar fascia while simultaneously engaging the abdominal stabilizing muscles. To put it simply, you become a powerhouse in your core.

First Let’s Talk About the TLF

The TLF area is extremely important for the biomechanics of movement because of its unique ability to shift loads and transfer forces from the lower extremities to the upper extremities. This is critical to understand if you want to optimize efficient movement patterning and unleash power.

The TLF helps the body shift loads and transfer forces. For example, posterior oblique swing movements between the upper and lower extremity (as indicated by the grey arrows) allow for throwing movements.

The thoracolumbar fascia has three layers attaching to many other core stabilizing structures:

Quadruped position gives four points of stabilization reducing threat of instability to the nervous system. Rocking against resistance reflexively activates the abdominal bracing mechanism. The central axis cylinder of support is engaged from 360 degrees. You are are also getting engagement of the posterior oblique subsystem, glute max, and latissimus muscles.

How to Perform the RQR 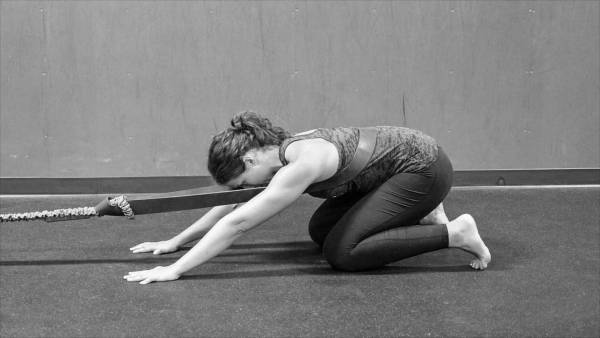 Perform at the beginning of any workout program.

Can you see which movement pattern the RQR looks like? The overhead squat. After doing RQR, you may discover that your overall squat pattern improves and strength increases.

One reason people cannot get into a standing overhead squat position is lack of stabilization. The nervous system prevents movement because it senses poor stability. Stability always limits performance and must always precede force production. As Paul Chek said, “You can’t fire a cannon from a canoe.”

“The TLF area is extremely important for the biomechanics of movement because of its unique ability to shift loads and transfer forces from the lower extremities to the upper extremities.”

Mobility restrictions also impact the pattern. If you discover poor mobility anywhere in the body – particularly in the ankle, hip, wrist, and thoracic spine – then, release the restrictions first and follow with the resisted quadruped rock.

Get mobility and then teach the nervous system what to do with it – stability. Now go be a badass.