Part of a training I went through last year included instruction on the Indo-Row WaterRower. “You gotta respect the rower,” the instructor said to me at the training. After several attempts at getting my best 500-meter sprint time and the sheer exhaustion that followed, I came to understand what he meant.

There are just certain exercises that when done to all out intensity make you want to throw up. They are typically the exercises that take every bit of your body’s focus, muscle power, and energy. Rowing is one of those exercises. While getting to such a place is obviously not fun and not necessarily the goal, such a reaction tells us a little bit about what we are doing. It tells us that what we’re doing is efficient, meaning that it’s taking our whole body to do our exercise. In fact rowing is one of the three most effective low- to no-impact calorie-burning exercises. Next to cross-country skiing and swimming, rowing is about as good as it gets. In fact, 84% of the body’s musculature is in use during rowing. (Which makes me wonder what the 16% of muscles that aren’t being used are?)

Rowing is indeed efficient, but it isn’t all that popular. In all of my years in fitness, previous to my current job, I think I had been on a rowing machine maybe twice. Every gym seems to have a passionate group of rowers, but typically it seems to be a pretty small (albeit vocal) number. With it being such efficient exercise, it’s a bit of a mystery why it isn’t more popular. Look, I am a gym rat and I have probably walked by a rowing machine a thousand times. But for the life of me I never stopped to take a second look at the rower and neither do most people. In my estimation, there are a few reasons for this slight:

First, the rower isn’t sexy. It doesn’t have a cool screen that lights up and there is no place for your People magazine. There simply are no distractions. It’s just you and that rower.

Also, the rower can be hard work. It can be really hard, but here’s the catch: it doesn’t look hard. I never respected the rower because it looked to me like my grandpa’s rowboat. Rowing looks boring and it looks simple, so people walk right past. Yet, it’s kind of like jumping rope. Rowing looks fairly basic and still you don’t know quite how to do it correctly, so you don’t do it at all. Yet for all of the crazes we’ve seen in fitness over recent years, you can give me a jump rope any time. The rower is like that. It’s old school, efficient. Done properly and with hard effort, it will kick your butt. 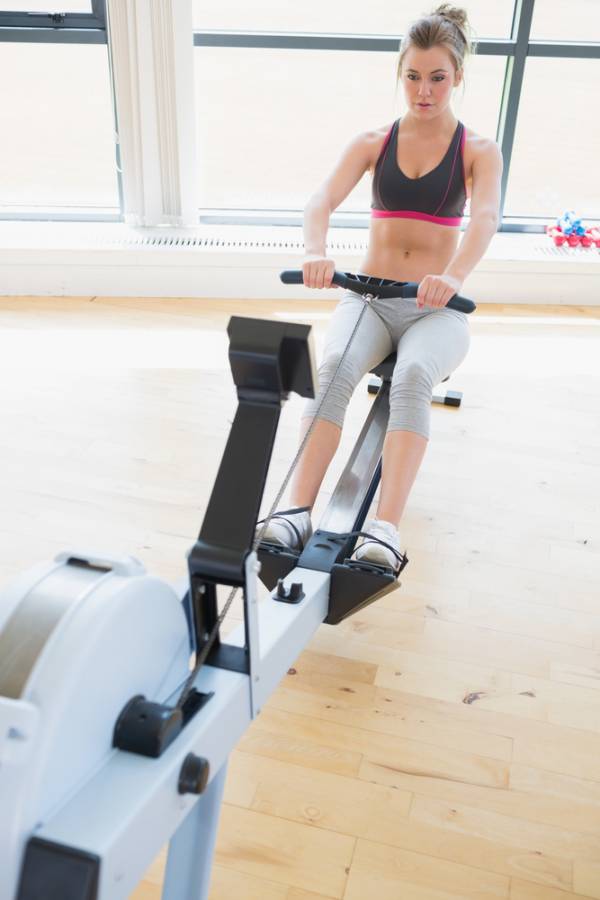 In addition to being efficient, rowing is also a hybrid exercise. That is, it’s cardiovascular in nature, but unlike a tempo run or a long bike ride, it’s also about force and power. Sixty percent of the movement in rowing is from the legs, and we all know that power comes from the legs. As I tell my boxing students, the arm is just a tool. The power comes from the legs and is generated from the ground up. A golfer swinging a club or a batter swinging a bat derives power from the legs. Even though the club or bat is in the arms, the arms stay loose. And so it goes with rowing. It’s not about being faster with the arms to generate power, it’s about connecting with the legs and popping the heel down to explode with power. Like track cycling, it’s a power play. Rowing is a great way to get that heart rate up but it’s also a great way to train for power.

As noted, rowing can be deceptive. It’s not super uncomfortable at first. The first minute of rowing feels fairly challenging but do-able. It’s that second and especially third minute where it really starts to suck. The key to not dying on the vine, as it is with any exercise, is proper breathing. The connected breath has to be a long inhale during the forward (recovery) phase of the stroke and a thorough exhale as you drive back, using the legs and pulling the handle back to the abdomen.

As to the rower looking easy, I beg to differ. It’s not your grandpa’s rowboat. The movement may look to the casual observer like a pretty straightforward movement, but frankly you can say that about almost any athletic endeavor. I can tell you that throwing a punch seems pretty straightforward but throwing a good and effective one takes years of practice. Though I have only been rowing for less than a year, I feel (thankfully) somewhat proficient in the movement. It helped to have good coaching and instruction. Like any athletic movement, the concept of rowing is fairly basic, but takes lots of practice to execute correctly and of course to execute correctly when you are super fatigued. If you want to try the rower, get some good coaching and then get your reps in.

Though my form has improved, I can tell you one thing, rowing does not get easier. Hard rowing is just that – hard. The rower most certainly has my respect. You gotta respect the rower.