It seems like it’s birthday season at work. You worked hard to limit the damage through the holidays, and the endless carry-ins and banquets and family gatherings. You even stayed on track through Super Bowl Sunday, the second biggest feast day on the modern calendar. You thought you were in the clear, finally able to focus on your nutrition and body composition goals without undue influence from those who, to say the least, don’t share your priorities.

Then Gertrude in accounting had a birthday. Gertrude is 71, and everyone loves her, and everybody brought in food. And there was this huge, photo-printed cake with a picture of her when she was in her twenties on it, and the next thing you know you’re eating Gertrude’s left cheek off a tiny “Happy Birthday!” plate with a spork. With every bite of cheap icing, you can feel your goals slipping months further into the distant future.

The next Tuesday, it was Stan in IT. Friday was Cheryl from HR. Your boss’s birthday is next week. So. Many. Cakes.

It’s Not About the Cake

If you’re honest, you don’t even like cake that much, especially the cheap cake that tends to show up at corporate birthday parties. It’s the social pressure that has you sporking it into your mouth. It’s the frustration of having to explain, every time you decline some kind of food or engagement, why you aren’t just going along with everybody else. It’s the bizarre cultural construct that states if you don’t eat the cake, you’re not sharing in the celebrated person’s joy. In effect, turning down the cake becomes a rejection of people, an insult to friendship, not just an effort to maintain nutritional balance.

Some days, you can pull it off. You stiff-arm Betty Crocker right in the face and keep on track, and you’re proud of yourself. But more often, the pressure becomes too much, and you cave. While you pretend to enjoy yourself in the company of people who wouldn’t understand your goals if you handed them a coloring book that explained them, you’re counting in your head the number of burpees required to account for this nutritional transgression.

Be Who You Are: An Athlete

Why do you put yourself through these mental and emotional gymnastics? You don’t owe anyone an explanation. You’re an athlete. You’ve worked hard for a very long time to become that, and now it’s as much a part of you as the freckles on your arms or your hair color. Do you apologize for having freckles? Do they require some sort of embarrassed explanation if somebody notices them in public?

The lifestyle choices you make to support your athletic goals aren’t anyone’s business but your own, and possibly your coach’s. If people feel threatened by your ability to stick to your plan in the face of abundant temptation and social pressure, that’s on them.

When you order a salad at a steakhouse, or decline a night at the bars with your buds because you have to be up in the morning for a training run, you’re setting yourself apart. You become a psychological “other,” and humanity loves nothing better than to denigrate those who are unlike themselves. Worse, the reasons you are different will expose a whole lot of envy and insecurity on the part of those who pressure you to abandon your goals. At best, they’ll chide you. At worst, they can get downright nasty. 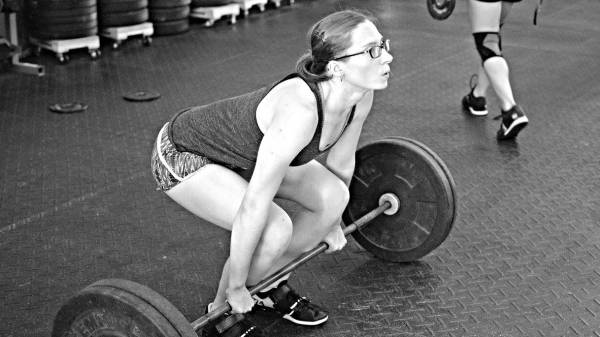 The moment you wake up and decide that you’ve had enough is your chance to make a change.

But you didn’t start training to become like everybody else. Quite the opposite: you were like everybody else, and that’s why you started training. For whatever reason, you decided you’d had enough of being counted among the nearly 80 million Americans who are considered obese. You were tired of being winded just walking up the stairs to your apartment. You hated what you saw in the bathroom mirror, and you decided to do something about it.

Your co-workers have a goal of winning their fantasy football league or watching every episode of Survivor. You have a goal of a bodyweight clean and jerk or a six-minute mile.

That change in mental priority, and the accompanying change in lifestyle, makes you different – and better. It has improved your life, widened your circle of friends, given you new abilities and confidence. Those are things to be proud of, not to shy away from just because they’re not the easy, popular thing to do at the office.

Don’t apologize to anyone for sticking to the goals and plans you have for your health and fitness. Dropping that inch from your waist, shaving that minute from your 5k, or putting those 20lb on your back squat require exactly the hard sort of integrity and dedication which are so uncommon in polite society. And those traits are nothing to be sorry for.