“If everybody lifted weights, the world would be better physically.” – Edward Aston

Edward Aston is not one of the better-known old-time strongmen, but he deserves to be.

Aston beat out Maxick for the World’s Middle-Weight-Lifting Championship in 1910. The following year, he won the title of Britain’s Strongest Man, beating out the famed Thomas Inch. Aston held onto that title for over twenty years until he retired, undefeated.

Aston reported in his book Modern Weight Lifting: And How to Gain Strength that some of his favorite and best lifts included:

In this video, you can watch Edward Aston in practice. The first shot is not him, but William A. Pullum bent pressing a barbell. But the second scene is Aston performing muscle control of the scapula.

The Importance of Grip Strength

In addition to his prowess in weight lifting and muscle control, Aston had a phenomenal grip. Probably the most famous feat in this regard was deadlifting a 2.25” diameter bar loaded with 496lbs – using an overhand grip.

“What Aston is saying is that if you build a strong grip, it will carry over into much else, beyond just strength alone.”

In his aptly title book How to Develop a Powerful Grip, Aston shared several of his thoughts on the importance of grip strength:

Now the greatest factor for the creation of a powerful grip is SHEER WILL POWER, for one cannot develop more-than-average strength concentrated in the hands and forearms without one possessing the necessary mental force capable of creating and exerting that power. The man with good gripping powers in invariably a man with a mind of his own, knowing what he requires from life and determined to get it.

What Aston is saying is that if you build a strong grip, it will carry over into much else, beyond just strength alone. And in his mind, grip training is more tied into willpower than other forms of strength.

He also stated something that is probably even truer today than in his day over a hundred years ago:

I have often marvelled that weight-lifters, as a rule, do not pay more attention to the grip. There appears to be no limitation to the height to which the fully developed grip of the human hands could be trained, and its full potentialities must be enormous. I am fully convinced that at least another twenty percent could be added to the poundage of some of the lifts is the lifter’s grip was more carefully cultivated. Take any lift of a heavy poundage and you will find lifters who are able to ‘jerk’ more than they can ‘clean.’ This should not be so.

2 Exercises to Develop a Powerful Grip

Aston’s grip strength book contains several unconventional exercises. In this day and age, we have lots of specialized grip tools like grippers, pinch blocks, and much more from companies like Ironmind and Strongergrip. These are great to have and lots of fun to use. I have quite a few myself. 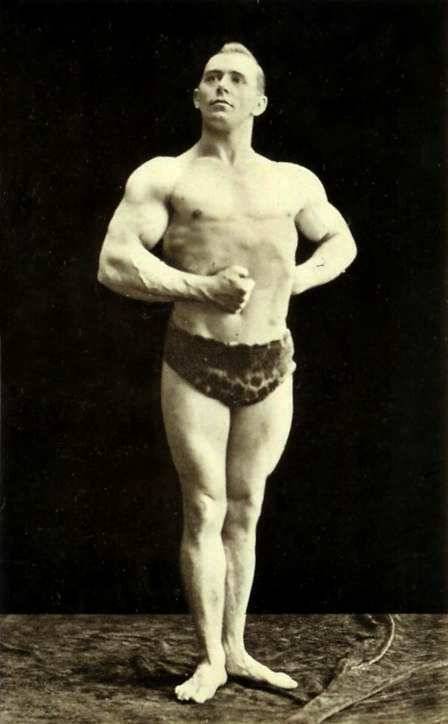 But this doesn’t mean you should forget the basics. If you look at the exercise selection in John “Mr. Hands” Brookfield’s books, you’ll see lots of low-tech exercises. Aston was much the same way.

So try these two grip-strengthening exercises from Aston’s book and see how they work for you.

Picking Up a Chair by the Leg

This exercise is best explained by Aston himself:

The correct method of lifting a chair by the leg is to kneel down on the right knee if the right hand is to be used (or the left knee when the left hand is used), the body being at right angles away from the chair so that an advantage of leverage is obtained. The grip should be taken with the fingers up the leg, the little finger being level with the floor. The elbow should also rest on the floor and the chair raised evenly so that all four legs leave the floor at the same time.

If the chair is a heavy one, it will be easier to elevate it by the back leg; although in this case the biceps of the arm will do most of the work instead of the grip. If, even with this added advantage, the feat cannot be accomplished, the hand can be shifted up the leg nearer the seat until it becomes easy. Then, as one’s strength improves, the grip can be taken lower and lower until the bottom of the leg can be utilised. After that, the front leg can be tackled.

Depending on the weight and size of the chair, this exercise can be easier or harder to do. Even though I have a decent grip, I just went and tried it with the wooden chairs that adorn my home and could barely get them up using the back leg as advised. It looks like I have my work cut out for me. 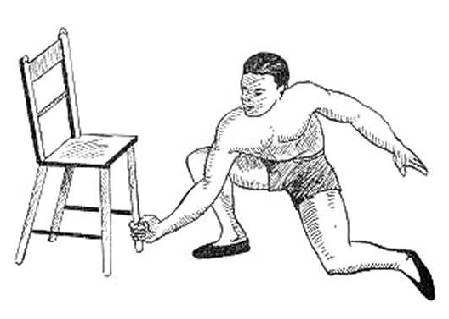 I’ve heard people say they can’t work their pinch grip, as they don’t have any weight plates. While that’s the common method, Aston shared an uncommon one that can work even better. And I bet you have access to a door somewhere.

Here is an exercise that will improve the grip in no time. Practice it in this way. Stand before an open door and with the feet level with the edge, grasp the door at waist height with one hand and bend down until you are sitting on your heels and leaning well backwards. Practice this with either hand until it becomes easy. Continue by using the thumb and first three fingers only, then thumb and two fingers, and then just the thumb and first finger. Having reached proficiency with both hands, take up the same position and suddenly drop to the floor as before, catching the door with one hand as you fall. Constant practice will result in a surprising degree of agility and muscular response, particularly so if the dropping back is done with vigour. 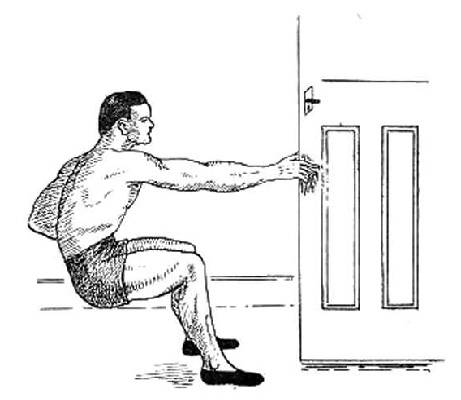 While we have access to many modern methods of training, getting back to basics is almost always helpful. The old-time strongmen are a great resource in this regard.

Give these grip-strengthening exercises from Britain’s Strongest Man a go. Use the comments below to let me know how it went and if you have any questions.