Learn about how Otto’s amazing muscle control can be helpful in weight lifting and other sports.

Otto Arco was a Polish strongman and wrestling champion. Born in 1881 as Otto Nowosielsky, he didn’t have the typical strongman profile. He was only 5’2” and 138lbs. But he was still considered one of the best wrestlers, pound for pound, in the world.

As a physical culturist, Otto was well rounded. He trained weight lifting, muscle control, hand balancing, acrobatics, and more. This broad range of skill and ability, even while being physically tiny, is what makes him one of my favorite strongmen. (Also, because he happened to be an avid stamp collector and poker player, too.)

RELATED: What Strongman Training Can Teach Us About Getting Strong

In 1913, Otto won the title of the World’s Best Developed Man. You can see that muscular development in this old photo here:

Some of his weight-lifting feats included a 175lb barbell getup and a 280lb clean and jerk. Alan Calvert, who founded the Milo Barbell Company in 1902, wrote of Otto:

Of all the well-developed men I have seen, Arco has the greatest power of controlling his muscles. His ability to alter their size or shape by flexing them, is something which has to be seen to be realized.

Luckily for us this was captured not just in photos, but also on film. This film, from the 1930s, showcased Arco at his best:

How to Learn Muscle Control

Working along with Alan Calvert, who was also a well-known author, Otto wrote a series of articles entitled How to Learn Muscle Control. They have since been compiled into a book, and it’s one of the most in-depth on the subject.

Here’s a small excerpt from the book:

The main purpose of muscle-control is self-mastery. Muscle control involves far more than the mere ability to make the muscles contract. It teaches you to relax, which is sometimes even more important than contraction. It gives you a selective control, and therefore the ability to single out those muscles necessary to the work to be done, and only those muscles; leaving the antagonistic, or non-helpful, muscles relaxed.

That makes a saving of energy in two ways; since it enables you to put all your energy into stimulating the needed muscles, and relieves those muscles of the interference of needlessly flexed antagonistic muscles. Muscle control, which leads to body-control, is great factor for success in all competitive sports.

This summarizes the theory of how the practice of muscle control can be helpful in weight lifting and other sports. While some people have advocated it as the best and only method of training, I think Arco would agree it is best used in combination with other forms of strength training. 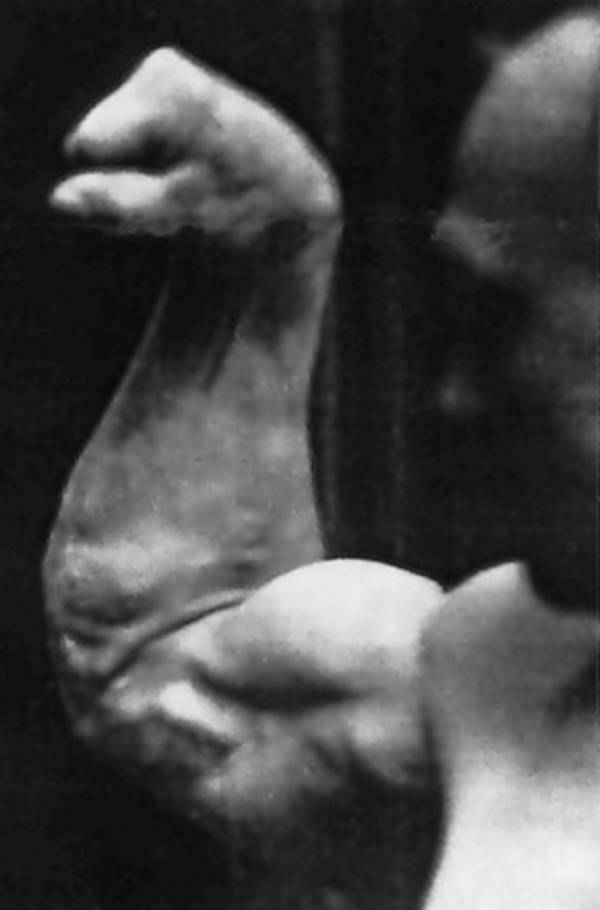 The Importance of Relaxation in Muscle Control

Arco continually emphasized the importance of relaxation in muscle control, as did other writers on the subject. It is even more important than contraction, and is the tougher of the two to do.

As you saw in the video above, shoulder blade or scapula control is some of the most impressive form of muscle control there is. In my personal experience it’s harder than all the rest, which also makes it a great area to work on. As Alan Calvert explained:

Arco says that if you can master shoulder-blade control by continual practice, the very fact that you have subjected the upper back muscles of the control of the will, will make it easier for you to get a mental domination over the other muscles.

So let’s look at the first of several exercises Otto covers to gain this mastery, as explained by Calvert:

Take for a start the control of the shoulder blades, or to be accurate of the muscles which move the shoulder blades. It is a simple elementary movement. Which nevertheless, some of you will find it difficult to do at your first attempt.

Now read on and see how much more completely and effectually Arco teaches you this control of the shoulder blades. He says; first, to sit in an arm-chair with your elbows resting on the chair-arms, and all your muscles relaxed. Now try and shrug your shoulders. In an ordinary shrug you would raise your shoulders towards your ears; but if you keep your arm muscles relaxed and your elbows against the arms of the chair, why then your shoulders cannot rise. But the effort to “shrug” will result in a slight lifting of the shoulder-blades. You can feel them moving under the skin; feel them moving away from the ribs.

With each day’s practice you will gain extra control, become able to move the blades more and more independently of the rest of the body; and the blades instead of being muscle-bound, as before, will become looser; and you will have consequently more “play,” more range of movement in the shoulders themselves.

Unfortunately, besides the muscle control material, not much is known about Arco’s training methods in other aspects of physical culture. What we do know is that he maintained his strength and skills into old age. In this photo you can see him at age 64, showing a great physique and demonstrating what is known as the rope, an advanced form of the abdominal vacuum. 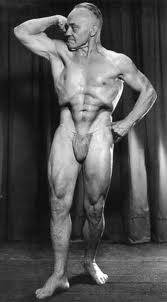 Take a cue from Arco, one of the strongest men pound for pound in his time, and start practicing your muscle control in combination with a wide range of other physical abilities.