Survivor’s Bias: How We Miss the Mark With Our Athletes

UCL injuries in baseball players have skyrocketed in the last decade. Finding the solution requires that we ask the right questions.

Today I’m going to discuss something you’ve never been introduced to on this site or probably any other fitness site, for that matter. This concept has typically been observed in the financial sector, but it can also be seen in most any system or competitive environment. Today I’m going to demonstrate how it shows up in the athletic and performance realm.

The Concept Known as Survivor’s Bias

Survivor’s bias is a phenomenon typically observed in the financial sector where people tend to place the emphasis on the winners or survivors within a given system. But it is a mistake to only analyze winners. By only focusing on the winners, you neglect to discover the real reasons concerning failures within that system, as you neglect those failed or lower-level parties that are involved within that system as well.

Allow me to elaborate on this as it relates to the performance of athletes. The example in this case is the recent and noticeable spike in Major League Baseball of pitchers having to get Tommy John surgery. This surgery is done to repair arm injuries pertaining to the elbow of their throwing arms.

Ulnar collateral ligament (UCL) shearing and tearing often occurs from continuous pattern overload with the high volume of throwing motion that occurs over time with pitchers. Many baseball analysts want to place the blame for this on the innings pitched, rest times (or lack thereof), or the strength and conditioning training of the players during the off-season.

As a strength coach this is something that got my attention and I could see that many people in TV, sports talk radio, and articles I’ve read on this subject were all asking the wrong questions. The fact is UCL injuries have been substantially rising among baseball pitchers long before any of the “survivors” were ever good enough to get into the Major Leagues.

The focus has been wrongly placed on the survivors, or in this case the players who were good enough to make it into Major League Baseball. But UCL injuries have been consistently increasing in youth and high school pitchers, as well. This can be seen here below in the chart provided by the American Sports Medicine Institute. 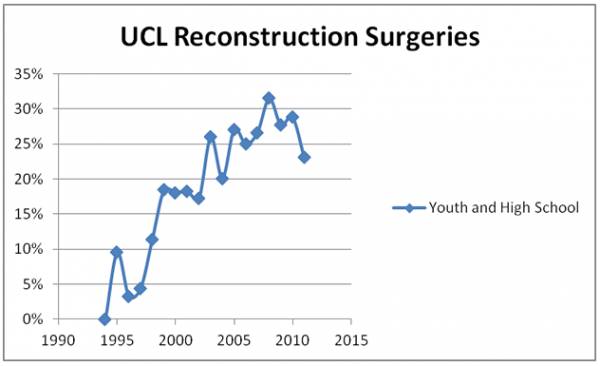 As you can see, there has been a steady increase in the number of UCL injuries spanning over a sixteen-year period. What is especially interesting when looking at this chart is that twenty or so years ago youth travel baseball exploded onto the scene, overtaking the traditional community baseball leagues as the standard in youth baseball competition. And some of these youth travel teams can play over a hundred games a season! Now I don’t care how you try to spin it, a schedule like that will result in a tremendous amount of throwing volume on young pitchers over the course of even just an amateur career.

So as you can see when people start blaming the Major League pitcher and everyone around him for his elbow injury, they are generally doing so with no regard for the player’s history and the thousands of innings pitched before he ever got to the big leagues.

Survivor’s bias is an easy trap to fall into. The key to sniffing out a solution to a problem is making sure the right questions are being asked in the first place. As a strength coach, I get a bit frustrated when other strength coaches are put on the chopping block because some of the pitchers are getting injured. The prevalence of these injuries might in fact be a lot worse if the strength and conditioning field were absent from MLB.

As coaches, we all want the best for our students and clients. As a result we’re more than willing to look at what we can do to better serve the athletes we train by taking responsibility for the criticisms that come when the injuries occur. Now don’t get me wrong – I’m not saying strength coaches or programs should be excluded from the discussion on injury prevention, but I am saying that with survivor’s bias a greater piece of the problem pie may be attributed to coaches than is appropriate. 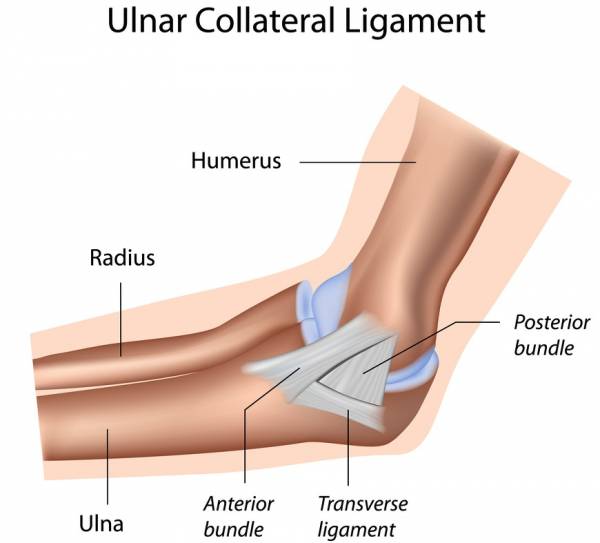 Other Observations on Athletic Development

I’ve always found it to be interesting that large portions of the athletic communities in Russia and Eastern Europe have historically worked to develop training clubs to foster the development of youth athletes with regards to body mastery and strength – before they emphasized their skill development in specific sports.

We do just the opposite here in the United States. Many of our kids start learning to swing a bat or throw a ball while trying to maintain some semblance of control and stability during this process at those early ages. These kids learn the sport skills first, before working on any respectable level of foundational strength development.

The emphasis on athletic performance and strength development with our athletes isn’t even a thought with many of the kids until they reach their early teenage years. Could this also be part of the problem with the increase in Tommy John surgeries? 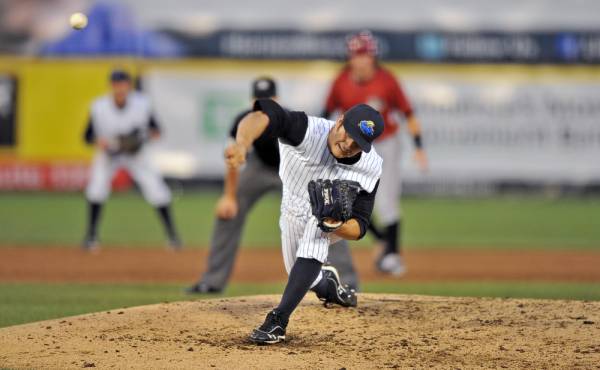 As strength coaches, we can certainly work on strengthening our athletes in the right ways to prevent various injuries and ailments. With emphasis on strength, mobility, and flexibility we can certainly improve the health of most any athletic community.

But, given the example of the baseball pitchers and with youth travel baseball not seeming to go away anytime soon, as strength professionals trying to curtail injuries are we merely having the effectiveness of a Band-Aid trying to slow the bleed of a massive wound? Remember it’s all about asking the right questions.