Tennis elbow – or lateral epicondylitis – is a common injury in many of the athletes who present with elbow pain. As an orthopedic surgeon, I have been treating this problem with greater frequency, especially in the cross-training and CrossFit athletic communities.

Previously, I saw this problem mainly with professional athletes and racquet sport players, but this problem has become more prevalent in the general population due to evolving active fitness lifestyles.

What Is Tennis Elbow?

Let’s review the basics of “tennis elbow” or lateral epicondylitis. It is a tendinopathy at the origin of the extensor carpi radialis brevis muscle. This muscle allows you to extend the wrist. Research has shown that this problem is due to degenerative changes rather than an inflammatory process. Often we associate inflammation with most forms of tendonitis, but not in this case.

Common causes and associations of lateral epicondylitis include repetitive wrist extension and forearm rotation. I treat this issue in athletes who perform multiple sets of dips, push ups, and chin ups, and, of course, in athletes who play racquet sports. In addition, tennis elbow can present if a person’s job involves extensive periods of repetitive motion at the elbow and wrist. I often see this in carpenters and manual laborers who use heavy power tools.

The initial symptoms of lateral epicondylitis involve pain on the outside (or lateral aspect) of the elbow with varying degrees of swelling. Individuals who present with these symptoms also tend to have decreased grip strength, especially when the elbow is flexed to ninety degrees.

Patients often complain of not being able to use their racquets well, primarily due to pain and a substantial lack of grip strength. This affects performance and the ability to be competitive. Other complaints include pain during push ups, weight lifting, or other repetitive, high-intensity motion exercises or use of certain types of fitness equipment. 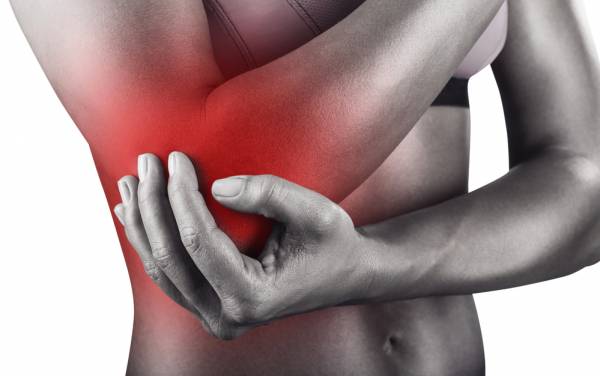 How to Treat Tennis Elbow

There are many treatments that I have found to be extremely effective in treating tennis elbow. Here is a basic strategy that I would recommend. This protocol focuses on non-invasive therapeutic treatment options:

Currently, platelet-rich plasma (PRP) injections are also being used, but the unequivocal data is still in the developing stages in regards to it being an effective recommended treatment. Many of my colleagues and I strongly believe that the data for PRP injections will eventually confirm this is a viable treatment modality for lateral epicondylitis.

Is Surgery a Valid Option?

Surgery is the final treatment when all else is less than optimal. This consists of extensor carpi radialis brevis tendon debridement with or without a lateral epicondylectomy. Physical therapy is often indicated after surgery to improve strength and function.

As an integrative, holistic surgeon, I advocate trying all non-operative treatment protocols before considering surgery. I remind my athletes and patients that acupuncture should be explored and utilized. Acupuncture has been an effective treatment in my orthopedic practice for lateral epicondylitis, as well as, for other forms of tendinopathy of the shoulder, elbow, wrist, and hand.

Athletes should continue to work out in a smart effective manner even if they have tennis elbow. More mature athletes should be aware of their bodies and make cross training adjustments to their routines, to add diversity and avoid injury.

Tennis elbow or lateral epicondylitis is common in athletes who overtrain or do repetitive exercises that involve excessive wrist extension and forearm rotation. It is also common in beginning athletes who are simply trying to perform exercises their bodies have not done before. They may be executing these exercises with poor form, improper posture, or bad technique, which may predispose them to develop this painful problem. This can be avoided with appropriate form and a progressive exercise program, which avoids competition and promotes self-awareness.

Exercise is an elixir of life! Keep on exercising and be aware of any pain or discomfort in your elbow. Consider utilizing the treatment strategy, which was presented, and remember, try all the non-operative modalities before considering surgery.

Dr. Levi Harrison earned his medical degree at the University of California at Davis, School of Medicine and completed fellowship at the internationally renowned Indiana Hand Center in Indianapolis. He completed his Orthopedic Surgery residency in Los Angeles where he now resides and sees patients.

Dr. Harrison's practice is the center of excellence for sports-related upper extremity and shoulder injuries, as well as hand rehabilitation. He has a special interest in hand and wrist trauma and fracture care. He also provides exceptional care in the area of repetitive motion, work-related injuries, and aesthetic and restorative hand function procedures.

Dr. Harrison has developed his skills during more than two decades of education and training, and as such, he finds himself guided by three core values: commitment, compassion, and service, which he shares in his life and daily practice.

In his own words: “My mission is to heal, restore and rejuvenate with compassion and integrity. I am grateful to provide clinical and surgical excellence to support my patients as they return to an improved quality of life. My involvement in the community extends beyond my practice into the lives of those I serve through motivation, fitness and healthy living and weight management presentations.”