All too frequently I observe lifters having problems in the jerk, and I can tell by the gestures they make and the expressions of their coaches that they believe the problem lies with the role of the arms and shoulders. But jerks are often lost in front, and much of the time this can be attributed to improper actions of the legs and feet.

Footwork has a role in two important aspects of successful jerking technique. The first role is in driving the weight upwards. Almost the entire impetus for moving the weight upwards comes from the rapid extension of the hips and knees and plantar flexion of the ankles. Athletes who have mastered the leg and footwork of jumping should have no trouble transferring this movement pattern to the upward drive of the barbell for the jerk.

In the accompanying photo, I’ve managed to catch my former lifter Lindsey Valenzuela at the peak of the jerk drive. This photo captures Lindsey jerking her personal record at the time of 108kg. Her body alignment is vertical, the hips and knees are extended, and the center of pressure of the feet is on the balls with the heels well off the floor. Before Lindsey became a CrossFitter and weightlifter, she was a Division 1 scholarship volleyball player at Cal Lutheran University and obviously mastered the jumping movement pattern. Now, instead of propelling herself upwards, she is transferring the force to the barbell and causing it to rise rapidly.

In order for the bar to finish up over the head and not out in front the arms must not be involved until the bar is higher than the top of the lifter’s head. This takes place because of two events. The first is the driving of the bar upwards with the legs and hips, and the second is the dropping of the lifter’s body at the conclusion of the drive. If the drive is incomplete or only performed by one leg, the drop under will be premature.

The second aspect that involves the actions of the feet is during the split. Many people think the feet move and land simultaneously. In actuality, making a successful jerk requires the rear foot to strike the platform first, followed shortly thereafter by the front foot. The foot that strikes first gains traction and the body moves in the opposite direction. If the rear foot strikes first, the body moves forward and should end up directly under the bar. If the opposite occurs, the front foot striking force will push the body backwards and out from under the bar and hence the jerk will be lost in front. 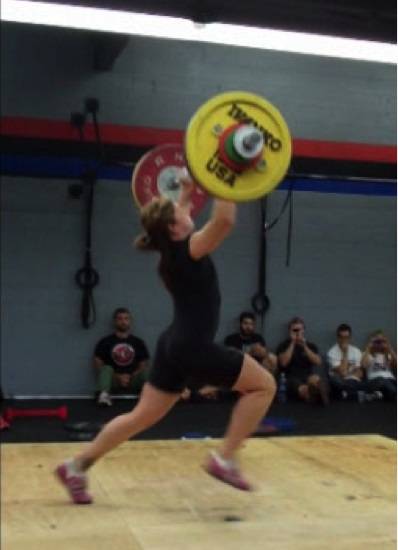 In this photo of the same lift, Lindsey has “skimmed” her rear or left foot backward, while the front foot is lifted higher or is prancing. The rear foot will gain traction first, pushing the body forward underneath the ascending bar, and then the front will strike the platform. Thus a big part of keeping the jerk overhead is the appropriate action of the feet. You should also note that her elbows are turned out to the sides and this has the desired effect of keeping the bar trajectory vertical.

Paying attention to these two sequential footwork movement patterns can aid greatly in developing consistency in bar placement in the split jerk.