The 2015 Frannies: The Worst in the Sport of CrossFit

The Oscars has its Razzies, the counterpoint to its self-aggrandizing pageant, so let’s cash in on that feel, shall we?

The CrossFit Games Open is here. You are about to embark on five weeks of hopefully well-crafted, smartly designed workouts that serve to deliver the best of the best to the next level, whether it’s the master’s qualifier or regionals. The next five weeks, for many of us, will be a dark, focused, stressful time.

That said, before we go head first into the suck-fest that is 15.1, I thought it might be fun to kick off the Open with a look back at some of the most egregiously awful, yet unintentionally humorous CrossFit nuggets in the archives. A short respite, if you will, before the horror begins.

Since the Academy Awards are firing up in the background as I write, there is no reason not to exploit the awards-show flair. The Oscars has its Razzies, the counterpoint to its self-aggrandizing pageant, so let’s cash in on that feel, shall we?

Hence, without further ado, the 2015 Frannies.

When CrossFit first caught on, there was a lot of experimenting that took place. We figured if CrossFit was functional, then why not create movements that mimicked almost anything we do in the real world? Want to get ready for winter? Enter virtual shoveling!

Aside from the fact this was actually nothing like shoveling, the problem was this movement also confused nearly every person who attempted it. There was just no way to hone in on how this was supposed to feel, and, just like real snow shoveling, the movement fatigued the back past the point of any benefit. If any box programs virtual shoveling today, it’s only because they are having “Vintage CrossFit Day” at the box.

This is from the same experimental era. It smacks of “Hey guys, CrossFit is so awesome. How can we make it more awesomer?” This is an actual CrossFit video, not some renegade bunch of crazies from whom HQ has distanced themselves. In fact, you might recognize mobility guru Kelly Starrett as the mastermind behind this tomfoolery. Always throw your barbells. Nothing could go wrong.

Other nominees: Atlas Stone Fran, Double Grace, Underwater Isabel (Okay, I made the last one up.)

Worst Use of a Burpee – “The Burpee Mile”

Nothing quite says “quality, well thought-out programming” like doing burpees for a full mile. This little gem was all the rage in that awkward 2006 to 2010 more-must-be-better period of CrossFit. That time when we all tried to find new and unreasonable means of one-upping previous WODs. We’d found the deck of cards roulette method was not enough and sledgehammering a big tire was unsexy, so this masterpiece came into being.

The average number of burpees exceeded a thousand, and the average workout time was close to two hours. The upshot of a workout like this, other than being foolish, is that it unhinged your training for a solid two weeks. It was just a stunt.

It’s not the weighted toes to bar or the erg-facing burpees I have a problem with. No, it’s the straight-armed and straight-legged row components. This may go down in history as one of the most ill conceived uses of a Concept 2 ergometer. 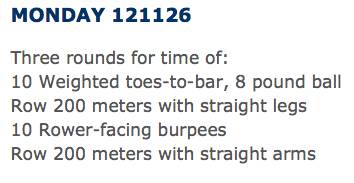 Rowing 200m on a Concept 2 erg with just your arms makes little sense. Neither does doing so with just legs. These are pieces of the row stroke that, while providing a miniscule cardiovascular punch, are outweighed in their silliness by any benefit that may be derived.

“Using partial strokes may be something that would benefit a novice who is just learning to row, but I can’t sugarcoat this – doing it as part of an actual metcon is just plain asinine.”

This type of movement would be akin to doing three rounds for time of ten clean pulls and ten kips while lying on the ground. These are merely pieces of a larger puzzle, training techniques that don’t have a place within a conditioning piece. Using partial strokes may be something that would benefit a novice who is just learning to row, but I can’t sugarcoat this – doing it as part of an actual metcon is just plain asinine. Which, I suspect, is why we have not seen this movement come up since.

I genuinely like Christy Adkins, but I feel like she and Gretchen Kittelberger must have sighed loudly at drawing the short straw on this demo workout. Both do a serviceable job not sniggering through the explanation.

This is where CrossFit gets it wrong on all points. In 2013, Southern California athlete Ryan Fischer took umbrage with his judge no-repping him and in the heat of battle apparently said, “I’m going to fucking kill you.”

There is an easy and obvious solution to this conflict: disqualify the athlete. You can even publish a press release on the Games website citing the rule violation, similar to what the USADA does when someone tests positive for doping.

“Fisher was in the wrong, yes. But Castro cemented his status as world-class jackass in the process. Even Kanye was shaking his head.”

What Castro chose to do instead was to dress Fischer down publically, not only in front of the other athletes, but also in front of all of the judges and cameras that had been called over. Moreover, CrossFit’s media team then published this video as a feature, under the guise of “Rules Clarification.”

This public humiliation compelled Fisher to publically apologize. In addition, CrossFit assigned a “special judge” to Fisher for the remainder of the competition. The mere fact that Castro pulled Fisher front and center and said, ostensibly, “I am going to make an example of this guy,” is at best corporate bullying. Castro clearly relished in the moment, at the expense of the dignity of the sport itself.

Would Castro have done this to Rich Froning, Dan Bailey, Lauren Fisher, Annie Thorisdottir, or Jason Khalipa? No way. Not in a million years. But CrossFit saw an opportunity to flex its muscle and did so. Fisher was in the wrong, yes. But Castro cemented his status as world-class jackass in the process. Even Kanye was shaking his head.