The 5 Most Common (and Most Preventable) Running Injuries

Save yourself a trip to the doctor and learn how to treat these common running injuries on your own.

Upon sustaining a running-related injury, most people believe it is due to either one of two things: the shoes they’re wearing or that they ramped up their mileage too quickly.

If this is you, before you go buy that new pair of shoes with the fancy insoles, you deserve to know how you can save a lot of time, money, and frustration.

If you’re like most runners, the toughest part for you is not the training, but being able to train consistently while balancing it within the rest of your life. Running becomes all the more difficult when you’re forced to the sidelines with no knowledge of what got you there. What results is a vicious cycle of injury after injury, while you attempt to treat the symptoms. Sound familiar?

Most running injuries can be linked back to how you run. The best part about these injuries is that they’re all correctable, relatively inexpensive to deal with, and utilize long-term fixes to keep you running healthy for years to come.

Simply put, there is a standard for how you need to run, and anything outside this standard could lead to one of these five common injuries:

This manifests as nasty pain in the bottom of the foot that is especially terrible within your first few steps in the morning, runners sometimes describe the feeling as if they were walking on glass.

RELATED: Free Your Toes By Stretching Your Plantar Fascia

Plantar fasciitis is an injury that can drag on for season after season if running mechanics are not addressed. There are two major things cause injuries – suddenly stopping a movement and creating improper leverage. When these things occur, tissue is forced to move in directions where it is not designed to handle the stress. You’re no longer working with gravity. Your movement patterns are incorrect.

“If you’re like most runners, the toughest part for you is not the training, but being able to train consistently while balancing it within the rest of your life.”

In this case, inflammation and pain stem from too much load on the plantar fascia (plantar meaning the bottom of the foot). This typically results from a heel strike followed by a neutral strike where the foot slaps the ground. Culprits also include excessive push-off or a tense and active toe landing.

The Long-Term Fix for Plantar Fasciitis

Teach yourself how to keep your feet underneath your body and pull versus push from the ground. Practicing jump rope for a few minutes is a simple way to develop proper landing pattern. This will also improve your overall foot strength. 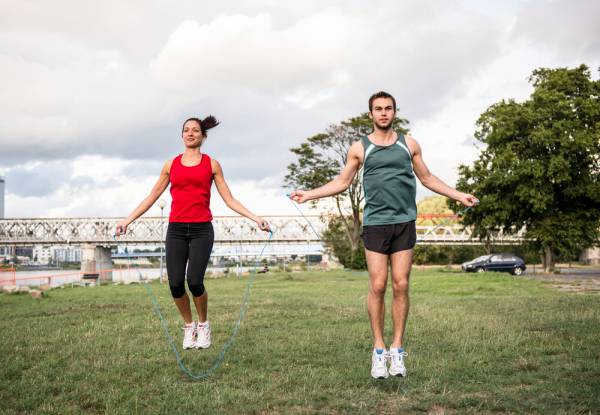 And don’t forget to loosen up your calves and the Achilles tendon with a few myofascial release techniques. Stay away from orthotics such as hard arch supports that are typically prescribed in this situation. Fix the movement not the symptom.

Your Achilles tendons are like shocks on your car. They’re the first to absorb the impact before the rest of your body takes the load.

“Common running injuries no longer have to leave you out of commission and away from the sport you love.”

When you get Achilles tendonitis, it feels like a hot spot on the back of your heel. When your foot is pointed or flexed, the tendon can even make strange noises. When it comes to the cause, in most cases, you’re running and not allowing your heels down to the ground. This can also be a result of excessive push off. (Noticing a theme?)

The Long-Term Fix for Achilles Tendonitis

To correct this issue so it never comes back, teach yourself how to let your heels gently kiss the ground. Loose feet and strong calves are important considerations. Once there’s no more pain, the classic ball-of-foot hop drill or a few sets of twelve-inch box jumps are a good place to start learning how to release your heels.

The patellar tendon strap you see runners wearing (the thing around their leg just under the knee) isn’t going to solve this annoying injury. Kinesio tape? Forget it. Classified as pain just beneath the kneecap that stiffens up after longer periods of sitting and hurts when walking down and up stairs, runner’s knee is actually a completely preventable issue.

It’s not just the “too much, too fast” rule being broken, but also that you’re most likely landing ahead of your body with either a locked-out or bent knee (also called over-striding). Knees are not designed to handle that kind of load. It results in unnecessary ground reaction force, and when coupled with tight quads and a weak gluteus medius, running like this is a recipe for disaster.

The Long-Term Fix for Runner’s Knee

Learn how to fall and keep your feet underneath your body. Your feet are most likely not getting off the ground quickly enough. Increase your cadence above ninety pulls per foot per minute. A study published by Medicine and Science and Sports and Exercise in 2004 said that running with the Pose Method reduces impact on your knees and minimizes vertical oscillation (push off) by fifty percent. Are you ready for healthy knees?

RELATED: 9 Thing I Wish I Had Known When I Started Running

IT band pain typically feels like a dull ache brought on during running and it can come and go throughout your run. In some cases, you’re forced to stop and walk. In the great words of mobility guru Kelly Starrett, “If you feel pain during or after moving, then what you were doing was not functional movement. Something’s gone wrong.”

The Long-Term Fix for IT Band Pain

If you experience IT band pain, you’re typically heel striking, landing out in front in front of the body and on the outside of your foot. If you’re like most runners, your quads get extremely tight, especially lateral of your knees. So start with myofascial release techniques and strengthen your glutes.

From a run mechanics perspective, you should implement the alternating foot pull drill, which will teach you to change supports without bowing out your legs.

Have you ever been at the end of a marathon and witnessed runners stumbling in bent at the waist? Holding position is easier said than done for that length of time.

Running can break down your posture and the resulting back pain can on instantly. The pain can be mild to severe, shooting through the glute and radiating down the leg. In some cases it can hit you later in the day after a long run or stop you on your way out the door.

RELATED: A Guide to Low Back Pain

Once again it’s an issue of the foot landing out in front of the body, sometimes coupled with over-rotation of the upper torso. You’re stopping a movement, twisting the spine, and asking the lower back to make compensations foot strike after foot strike. When you break at the waist instead of staying in a nice upright position, the load has to go somewhere.

The Long-Term Fix for Lower Back Pain

Awareness and perception are the keys to fixing your mechanics. In this situation, you could employ a few sets of the front to wall drill, spending thirty seconds pulling in place in a nice vertical position, then adding in a smooth run off the wall. Make sure your hamstrings are loose and begin a strategic program to strengthen your core.

Enjoy a Lifetime of Injury-free Running

Common running injuries no longer have to leave you out of commission and away from the sport you love. When you focus on fixing the actual problem, as opposed to the symptoms, the same old injury will stop coming back.

You deserve to run injury free for the rest of your life. All you have to do is pay attention to your movement.