One of the things people love is stuff. They love specialized shoes for weight lifting, they love T-shirts with edgy slogans, and they love gadgets. In the world of gadget lovers, no group covets them more than triathletes.

From aerodynamic helmets to compression socks, triathletes leave no stone unturned when it comes to chasing the smallest improvement in speed. While power meters were actually popularized by cycling great Greg LeMond back in the 1990s, triathletes have jumped on the bandwagon in an effort to train better and find improved run performance in their races.

Why the Power Meter?

What is it about power meters that makes them useful when measuring training or racing performance? Why not just use heart rate or speed?

Heart rate (HR) is a well-understood parameter of training, having been studied for decades at this point. But the problem with heart rate is that it can be affected by many factors, from food intake and dehydration, to just your position on your bike, to maybe even a dog running out of someone’s gate and chasing you. For me, I have seen my heart rate change by as much as ten beats per minute at the same pace over a period of two hours simply due to dehydration. That can make calculating effort quite tricky. Do you adjust on the fly and drop your effort to stay in the same HR zone, or do you go by rate of perceived effort at that point instead, which makes having used HR in the first place a total waste of time?

Have a think for what happens if you decide to do a sixty-second all out effort. You begin straining immediately, and a power meter (PM) would show that, but it will take some time for your HR to climb. According to your HR readings you weren’t working hard until perhaps the last thirty seconds of that interval, but the PM will show the reality of your effort right from the start.

How to Use the Power Meter Correctly

Like any tool, a PM is only as good as your understanding of how to use it. The first step to using a PM is what is called a functional threshold power (FTP) test. There are many ways to perform this test, but perhaps the easiest is the twenty-minute test:

The goal of the test is a sustained twenty-minute effort. This is as close to all-out as you can make it. I suggest performing this on a trainer to eliminate the risks of going all-out on open roads or having red lights mess up your test.

This test is actually slightly above your FTP as the full test is a sixty-minute effort. To use this test as your FTP number, multiply it by a factor of 92-95%. (Meaning that a result of 200W would give you an FTP of 184). 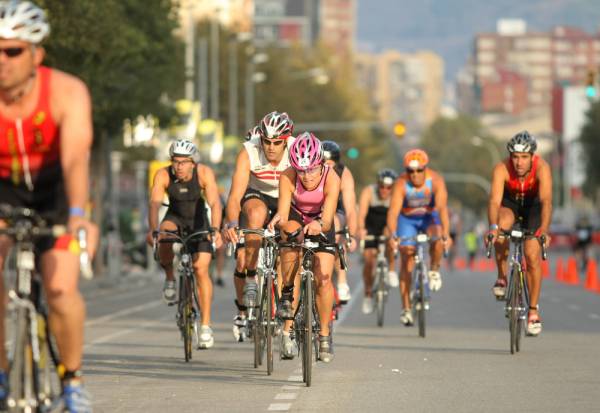 What Your Test Results Mean

For cyclists, knowing how much effort you can sustain for a given time is crucial when trying to decide whether to make a breakaway or not. But when cyclists cross the line, they are done and can go and have a massage. Triathletes need to change shoes and begin the final leg of the race at this point. So not only is FTP a good way to measure how hard you can sustainably ride, but it also helps you determine how hard you can ride and still run effectively afterward.

The basics for using FTP in long races is that an Ironman bike will be ridden at 70-80% of FTP for the fast biker (sub-five hours for the 180km/112mi ride), while a more mid-pack rider will ride at 60-70% (five to six-hour rides). Anything much over this and there will be a lot of walking during the marathon. For shorter races such as half-iron distance you can add anywhere from 5-8% to figure how hard you can go.

But there still needs to be a reality check. Top Ironman riders have been shown to ride an Ironman bike leg averaging around 280W, which puts their FTP at around 305W. So before you start figuring out what percentage of your FTP you should be riding at, have a look at what the top guys do, what their FTPs are, and then calculate what you expect your bike split to be. Doing this will make the day far more pleasant. I can’t count the number of people I passed during the last 45km of the Ironman bike leg or during the marathon as they simply fell to pieces from going too hard early on.

A Tool Is Only as Good as Its User

But simply having a power meter won’t help you go from mid pack to elite overnight. Like any tool it is only as good as your understanding of it, and how to maximize your potential with it. Simply having a readout on your handlebars won’t do anything on it’s own. Like with HR training, I’ve heard many cyclists say mid-ride that they were supposed to be on a recovery ride, with HR in a certain zone, only to find themselves in the middle of a sufferfest. Instead of pulling out of the ride and doing what they were supposed to, they continued to drive themselves into the ground and then wondered why their performance never improved.

Training with the power meter can be humbling. The readout doesn’t lie and will tell you in black and white exactly how hard you are working. But if you stick with it, and spend your time doing targeted, specific sessions, you will see fast improvement – versus just going out for a ride.

These days power meters are far more accessible as there are many brands on the market, and all are cheaper than only a few years ago. If you’re looking for an edge in your training and racing this will be money well spent.