I’ve been training for the Iron Maiden Challenge. As a very small person, in order to achieve this goal I had to learn how to lift heavy on a regular basis without overtraining.

Three years ago I started training for a strength goal called the Iron Maiden Challenge – a weighted pull up, a military press, and a pistol squat all with a 24kg (~53lbs) kettlebell. By training for this goal I had to learn how to lift heavy weights on a regular basis without overtraining.

As you read this post keep in mind that my primary training tool was a kettlebell and the impact of this heavy lifting pertains to Turkish get ups and pressing. On the flip side, this approach can also apply to weighted pull ups if you are a taller and/or larger-sized woman or a man, given that a woman who is 5’9” tall and weighs 145+lbs may experience elbow pain or discomfort if she is training too much load, too fast, too soon, or in general.

The purpose of this article is to help women learn how to incorporate heavy lifting days into their weekly training program without overdoing it. Especially for those women who have a petite build like myself.

If you’re reading this and questioning the validity, I can tell you I speak from experience. I am 61 inches tall, range from 114-118lbs in weight, and have a very small bone structure. To get an idea about how small my frame is, when I was ten years old, my mom gave me a garnet ring for my birthday. Back then, I wore it on my middle finger.

Now at age 38 I still wear that ring, but on my ring finger and it fits perfectly. How many 38-year-olds out there do you know who can still wear a ring received as a gift at the age of ten?

This picture shows just how small I am!

Why Women Should Lift a Little Differently

Women should train like men, but there are some adjustments that should be made for women when it comes to heavy lifting and heavy training days so that they have balance in their training without feeling the stress on their bodies.

It’s important for women to lift weights, and heavy at that, and to train to be strong. In life we need to lift our groceries, children, suitcases, 44lb water bottles from the water delivery, and we may even perhaps need to move furniture when we don’t have anyone around to help us. As one of my clients once said:

Strength training equals freedom. It means that I do not have to ask anyone for help to lift anything. It helps me to always be strong and independent and to have the ability to move freely. 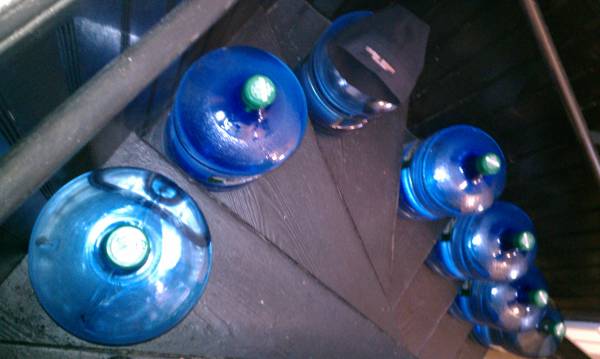 Can you move these without help?

The Reason I Lift Heavy: The Iron Maiden Challenge

Beyond the general day-to-day, heavy weightlifting can also be important to women if you are training for a specific goal. I first started lifting truly heavy weights after my RKC Level I kettlebell certification in April 2011. After I attended that certification, I was inspired to train for the Iron Maiden Challenge. I wondered if someone my size could train to be strong enough to pass the challenge – doing a strict military press, a strict tactical pull up, and a pistol all with a 24kg kettlebell.

There was only one way to find out. Train for it.

The first lift that I focused on working towards was the 24kg (53lbs) pull up. I thought the pull up would be the hardest lift for me to achieve. However, the press ended up being the most challenging for someone of my size and build.

I started training for this goal in September 2011 and determined that I could do weighted pull ups with 10lbs. I incorporated a pull up program specific to the goal of a 24kg pull up into my training. As I trained for the pull up, success came easy.

I had not ventured into pressing anything heavier than 16kg (35lbs) at this time and I had determined that I could do a Turkish get up with 20kg (44lbs), but I was not training them regularly, so I did not know of the battles of working towards the press that were yet to come.

By the time of my RKC Level II kettlebell certification in April 2012, I could do single weighted pull ups with 16kg (35lbs). After my Level II, I became focused on working towards the goal of the Iron Maiden Challenge and decided I would like to attempt the challenge sometime in 2013. The weighted pull up was still my primary focus at the time. 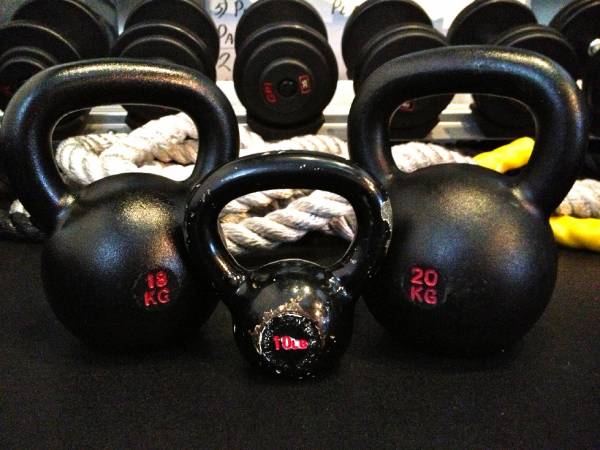 The Benefit of the In-Between Sized Kettlebells

In the fall of 2012, I pressed 20kg (44lbs, almost 40% of my bodyweight) for the first time. At that time I also purchased two 18kg (~40lbs) kettlebells, which was a game changer for me. I believe these in-between weights are essential for women and some men. The difference between 16kg (~35lbs) and 20kg (44lbs) is almost nine pounds, which is a big jump and makes it difficult for a woman of my size to progress.

Some may say it’s all in the technique and you shouldn’t need the in-between weights, but after experience training both with and without the in-between weights of 14kg (30lbs), 18kg (40lbs), and 22kg (50lbs), I can personally attest that they make a positive difference. I believe they are necessary for success if you are someone of my size and have a strength goal like the Iron Maiden Challenge.

And on the flip side, these in-between weights can also help the woman who is 5’9” and weighs 145+lbs work towards her 24kg pull up without over stressing her body. So yes, 4.4lbs can make a big difference!

When My Training Problems Began

As I worked towards the 24kg press, I incorporated more pressing with 20kg, as well as Turkish get ups and kettlebell cleans with both 20kg and 24kg. I did not have a 22kg kettlebell yet. As I worked with these weights more frequently, I started to have wrist, forearm, and elbow pain. I experienced forearm and wrist tenderness from the stress of these heavy weights on my small bone structure. 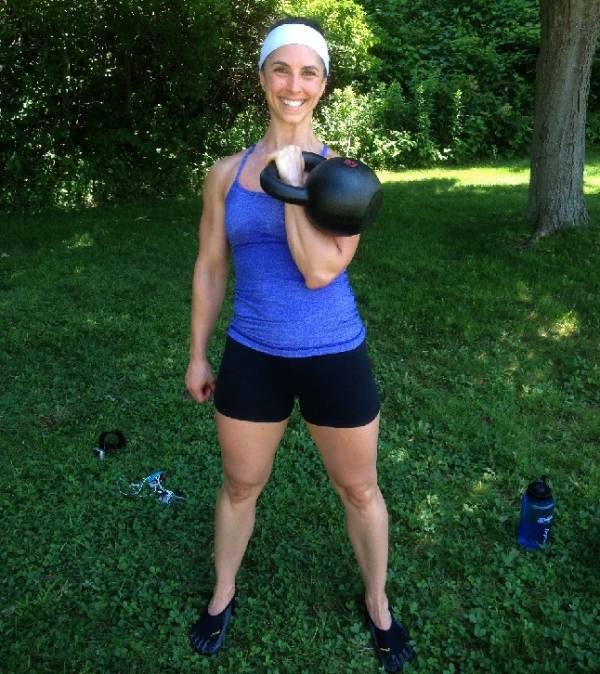 This is me holding a 20kg kettlebell to show you how large this bell is in comparison to my size.

I would wear wrist guards, but it wasn’t enough. I would back off using these weights for weeks until I didn’t feel tenderness, but then it would come back as I started to use them again, even if I wore wrist guards. As a small person, heavy weights took a toll on my joints.

It took a little over one year, from April 2012 to May 2013, until my body built up the tolerance and strength to use these heavy weights on a regular basis. I attempted the Iron Maiden Challenge in September 2013, but I missed the press. After a brief break from training for this goal, I am back to training for the challenge again and plan to attempt it sometime later this year.

How I Now Train Heavy Without Pain

I now train with 20kg, 22kg, and 24kg kettlebells consistently and no longer have wrist and forearm tenderness or elbow pain. The last time I had any of these symptoms was May 2013. I learned to put together a program that I could consistently follow, maintain, and build from without overtraining. What did I do?

Programming aside, if you are training for the Iron Maiden Challenge or a similar strength goal, you must accept that this goal takes time. You cannot rush strength. You have to have patience, consistency, and dedication. You cannot set a deadline for it. You can hope to meet a deadline, but it doesn’t always work that way. Strength that is developed correctly and strength that sticks is built little by little, and then sometimes you have to let it marinate for a while. Then it shows itself when you least expect it. 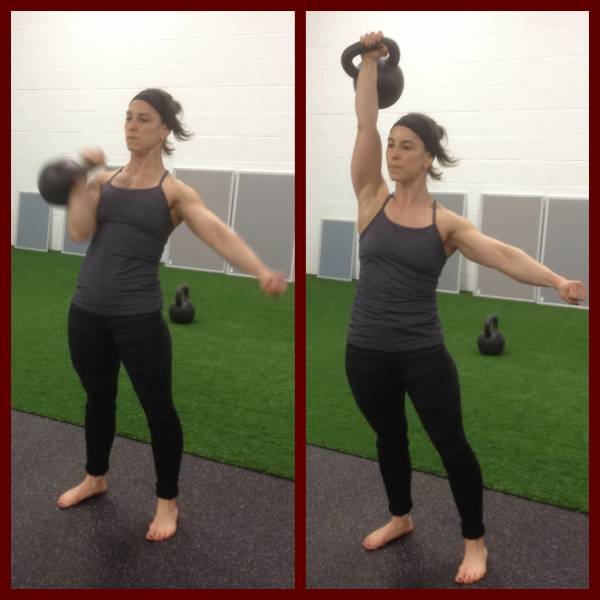 I learned to balance my heavy training. For most movements within a program, I program a light, a medium, and a heavy day for that movement. On the heavy day for that goal movement, that particular movement is my priority. I don’t program in any other heavy movements – I want to have the most success with the goal movement and any additional heavy lift would cause extra stress on my body.

Below is how I programmed training for the 24kg press:

Accessory movements were kettlebell cleans and Turkish get ups.

In order to reduce the stress on my small frame from training with heavy kettlebells and allow for proper recovery, I divided up the heavy movements on the three strength-focused training days as follows:

I did not train heavy get ups or heavy cleans on the conditioning days in the program.

Now, I am able to work with 20kg, 22kg, and 24kg on all five of my training days over the course of the week. Of course I vary the movements that I use them for over those five days, but I follow a program – and adjust when necessary – that allows my body to gain strength safely and effectively. And I no longer (and have not for a long time) get wrist, forearm, and elbow tenderness and pain.

For example, I now can press 22kg (~50lbs), which is 43% of my current bodyweight, for 10 sets of singles, hence, strength that sticks and what I call the Art of Heavy Lifting Without Overtraining.