The CrossFit Dream Team: A New Era of the Affiliate Cup

Will affiliates stop at nothing to design and recruit the best super team for the CrossFit Games?

With this announcement, the official era of the CrossFit Games dream team was born. Dream teams have existed for years, but prior to this, it was always a surreptitious affair. No one spoke of it, even though everybody knew it was going on. Now, much like the relocation of individuals to find an advantageous region to qualify for the Games, dream-teaming is breaking into the open and will surely become part of the competition landscape.

A Brief History of Team Competition

Following 2013, the new lesson was it was difficult to hide your ringers. Social media was like that kid in your Year 4 class who went and told the teacher the cool kids were playing with a lighter in the toilets. Super teams had to find another way. 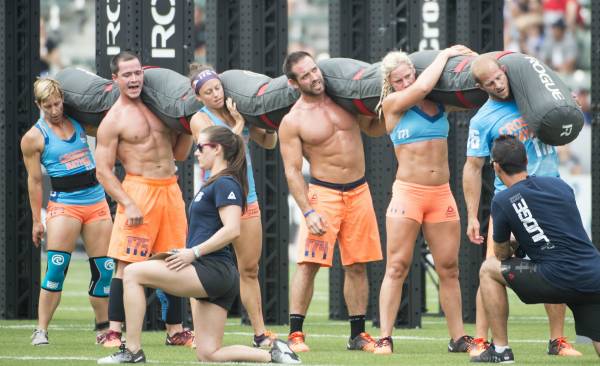 Team CrossFit Mayhem Freedom during the Worm Finale event at the 2015 CrossFit Games.

CrossFit Conjugate brilliantly addressed the issue in 2014 by assembling a dream team with nearly spotless methods (I will explain the “nearly” part shortly). A year before, CrossFit Conjugate was a brand new affiliate whose Regionals team was disqualified on day one of the Regionals for being unable to complete the requisite number of muscle ups. Yet they rocketed to second place in the world one year later. Quality coaching and programming, you may ask? Not really. You can’t grow a world-class team organically in a single year. Rather, through a so-called serendipitous series of relocations and subtle recruiting, Conjugate assembled a world class roster of athletes:

CrossFit Conjugate was true to the letter of the law. In theory, as long as a team meets the rule book requirements, there is not a damn thing wrong with assembling its component parts from around the country.

However, it takes a hell of a commitment to relocate from Quincy, Illinois to Cincinnati, Ohio for a year just to be part of a CrossFit team. It shows just how far some gyms will go in order to make it to the Games. Plenty of teams have been disqualified in the past few years for rule violations. And then there are the dozens of teams that were never caught, despite the relocations, the bogus Facebook “check ins,” and the workout logs. All to make it first to Regionals and then possibly, the Games. But for what exactly? How much value does the Affiliate Cup really hold?

The Future of CrossFit Team Competition

Apparently, the answer is a lot. Why else would Lindy Barber, a fine athlete in her own right, make the 180-mile move from Louisville to Cookeville, Tennessee? I can only assume that Froning actively recruited her, which means he is piecing together his 2016 hand-picked team. As if we didn’t already know this, Froning loves to win.

But Froning is hardly alone, and oddly, there is little to win – some money, a bit of residual notoriety, but that’s about it. Nevertheless, the desire to make it to the big show is huge.

The only difference between the Conjugate method (see what I did there?) of 2014 and the Mayhem method of 2016 is that Mayhem openly admits their assembly of a super team by way of Barber’s post. Conjugate had to operate in the “Don’t ask, don’t tell” era of pretending it was all staffing-related and happenstance.

We’ve entered a new era of the Affiliate Cup. I suspect a flood of similar announcements will follow. Right or wrong, it’s the landscape of the team side of CrossFit now. There will always be gyms like Diablo CrossFit, which prides itself in its teams being homegrown and home-trained. But the genie is now out of the bottle, and with Barber’s announcement, CrossFit gyms across the globe will likely now begin a heavy recruiting effort. The original purpose of the Affiliate Cup, to “Find the Fittest Gym,” no longer applies. The spirit of the law was corrupted for a while, and now the letter of the law is, too.

And that’s fine. It’s merely the reality of the way the sport has morphed. However, it certainly makes the team side of the Games less appealing, at least in my opinion. It’s tantamount to PEDS being legalised and all the top competitors admitting they are taking them. Suddenly, the achievement is less about fitness, programming, skill, and community, and more about who’s the best puppeteer.