The following is a three day per week routine for strength and size based only around the double clean. It’s simple, well-rounded, and most importantly – effective.

One of the ways to spot a trainer who actually has experience in the tool they’re trying to get you to use is by the way they write programs. And when it comes to program writing, nothing makes people kookier than kettlebells. It seems like the most popular way to use those krazy kettleballs is to write programs that have exercises in them like standing spine explosions or flexing disc herniations.

Well, let’s get back to basics and use them in a smart way, just like we should do with all the other tools at our disposal.

If you’re following my series on double kettlebells you’ll see this week we covered double cleans, so let’s begin there. The following is a three day per week routine for strength and size based only around the double clean. I’m going to show you how you can make massive gains without huge variety in your training. (In fact, I would argue that massive variety is the enemy of swift progress.)

Warm up the same way each day:

Single leg deadlifts (SLDL) – 3 sets of 5 on each leg. Pair this with get ups, performing a heavy single on each side for 3 sets. So do 5 SLDLs on each leg then a get up on each side and repeat two more times.

Why do we do these first? Because those two exercises give an amazing amount of reward, from anti-rotation to core strength to single leg stability. Gray Cook puts them as two of the top three exercises everyone should be doing. (The other being chop and lifts, however I believe that heavy get ups give most of the same benefits.)

The meat of this program is based on Pavel’s modified De Lorme program from Beyond Bodybuilding (in my opinion easily his best book). It’s based on using a 10RM load. Why 10RM and not something heavier? Well, in my experience kettlebell ballistics tend to work better when the reps are slightly higher. So while we may use sets of five when doing barbell cleans for size and strength, for bells sets of ten seem to work better. 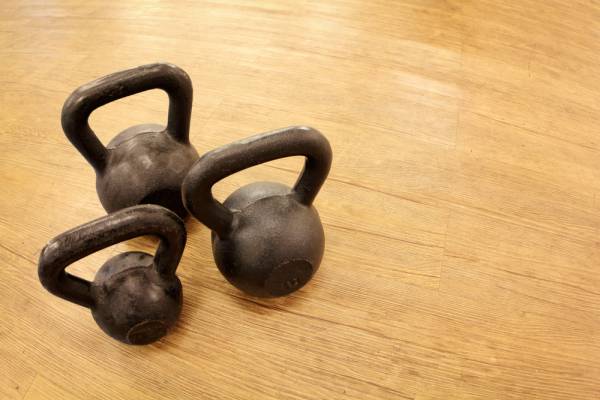 Practice double jerks, double snatches, and do all other work you may want to do such as overhead pressing and pull-ups.

Perform the same session as Wednesday but with one big exception – don’t use the 100% weight and only do 3 rounds. So if you chose to use 20kg, 24kg, and 28kg for Monday, today you’ll only use the 20kg and 24kg. It’s a deliberate day to allow the body to adapt.

The hardest session of the week is midweek for a good reason. Many people find it challenging to put in their best effort on a Monday. For some this is because they have a weekend filled with hiking, long rides, or match play of some kind, and for others it is because after a weekend off the body struggles to get into gear. Whatever the reason, try having your biggest session midweek instead of at the start of the week while sluggish or at the end of the week after a fatiguing week of training.

If you struggle to begin with sets of ten for the cleans, I often get people to start with fives and add a rep per week. So you have a progression like this:

If you miss reps you stay on that same week until you get them all. I usually find that people struggle around the six or seven mark and then again trying to get from nine to ten.

This is a simple plan, based on exercise science that works. No bells and whistles. The great thing about the kettlebell clean is that it is easy on shoulders and wrists and not as hard on the CNS as barbell cleans so you can actually train more during the week. The warm up work hits most people’s biggest issues found within the FMS screening process, while the variety work of Monday and the swings and squats rounds out the plan.

Give it a try for two months or so and see how you go. When you get to being able to do it with 16kg, 24kg, and 32kg for the main part of the program, you’ll be in pretty good shape both from a strength standpoint as well as a conditioning one. And you’ll probably need new shirts too.