The ketogenic diet is not new. It has been generating buzz for at least the past 20 years, with strong proponents sitting on either side of the fence. However, before you pick your side, it is worth considering the most recent research done on the ketogenic diet, this time using resistance trained men.1

The study population alone differentiates this study from other studies done on obese men etc., because it can effectively guide your understanding to a new level, especially concerning athletes. In the study 25 men were split into two groups and made to follow a ketogenic diet (KD) or the standard western diet (WD) for a period of 11 weeks. The KD group reintroduced carbohydrates during the eleventh week. Of particular note were the following:

1. The ketogenic diet does incur increases in lean body mass.

This goes against the tightly held belief that it is highly improbable that you will gain muscle mass while on a carbohydrate restricted diet. This could be due to the fact that it had never really been studied before and was all based on presumptions. The WD also elicited increases in lean body mass as expected, but it was not significantly different, statistically speaking. Such findings were also conducted and confirmned in rodents.2

2. Loss in body fat was significantly higher in the KD group than the WD group, at least up to the end of the tenth week.

Following the beginning of carb reintroduction, subjects of the KD diet experienced rebound gains in body fat, nullifying the significant difference observed during the previous 10 weeks. However, it is unquestionable that the ketogenic diet is superior for weight loss. If fat loss is your primary goal, you should follow a strict ketogenic diet, not a cyclic approach, because you are likely to regain fat during these periods of carb refeeding (as occurred during the eleventh week on the KD).

3. Testosterone levels increased significantly in the KD group, likely attributed to the increased intake of fat, particularly of the saturated variety.

This is significant, as previous studies conducted on obese men following a carbohydrate restricted diet did not demonstrate appreciable change from a control group consuming a standard diet.3

What likely made the difference was the saturated fat itself, which has been wrongfully implicated in heart disease by the medical community, when it is a very beneficial fat on its own. It only tends to become “bad” when combined with high levels of sugar or carbohydrate consumption, such as on a standard western diet. Testosterone levels are also likely to be higher as you get leaner, since an appreciable amount of conversion to estrogen occurs in fat cells.

This was an extremely interesting observation from the study. Why? Because it actually backfired in a way. For one, it did allow the KD group to catch up in terms of muscle synthesis, which is what they were after, but on the flip side, it also resulted in accumulation of a lot of fat, taking a 180-degree turn from the past 10 weeks.

This aspect of the study highlights that, while the KD does promote slow muscle gains, carbohydrate (reintroduction) leads to a dramatic increase in both muscle and fat accumulation. Many professional athletes display this immediately following a contest, when they have a “normal” meal of indulgences. This usually signals the beginning of an off-season bulking cycle.

5. Carbohydrates are inferior for weight loss, as both groups (KD and WD) consumed similar calories throughout the study, eliminating the assumption that ketogenic diets bring about weight loss as a result of caloric restriction.4

For years, it has be counter-argued that lower carb diets are no different from diets with moderate to high carb consumption, as long as the caloric intake remained the same. However, this was finally disproved in this study, as both groups (KD and WD) consumed the same amount of calories each day, but with a differing macronutrient profile. It was clear up to the 10-week point that the low carb ketogenic diet was superior, as subjects in that group lost significantly more weight than subjects of the western diet. 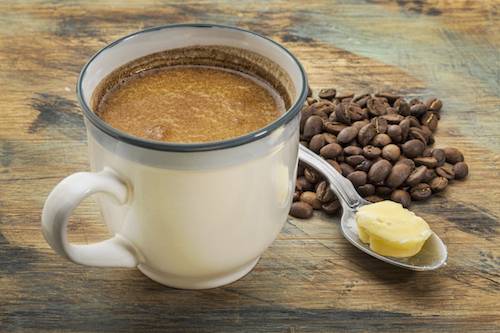 Conclusion and Plan of Action

If you are interested in starting to experiment with high fat and low carb diets, the easiest dietary change you can start with is to replace your breakfast with a high fat powered coffee, and practicing fasting until mid afternoon. This will help kickstart the metabolic changes needed in your body to burn more body fat.

Made popular by Dave Asprey as Bulletproof coffee, adding fats to your caffeinated beverage is nothing new and has been done for centuries in the Himalayas where native people drink buttered tea. We suggest making it easy for yourself and opt for an already mixed fat infusion specifically made for use in your coffee. They taste great and will help prime your body for fat adaption.

If you need to lose weight, look no further than the ketogenic diet.

Alex Eriksson is the founder of Anabolic Health, a men’s health website dedicated to providing honest and research-backed advice for optimal male hormonal health. He also develops nutritional supplements, specializing in the fields of hormones and ketogenic/low carb diets.


Alex Eriksson is the founder of Anabolic Health, a men’s health website dedicated to providing honest and research-backed advice for optimal male hormonal health. He also develops nutritional supplements, specializing in the fields of hormones and ketogenic/low carb diets.

Alex aspires to build a trusted resource where all men can come and learn how to fix their hormonal problems naturally, without needing TRT or pharmaceuticals. With well over a decade of experimentation with alternative health therapies, and running private lab testing to map out how supplements and nutrition affect our endocrine systems, Alex founded Anabolic Health.

Alex believes that no man should ever have to suffer from low testosterone levels, and that peak performance is within everybody’s grasp.