You’ve probably heard the latest news about the first two women to graduate from the grueling Army Ranger training. Pretty awesome stuff. When it comes to women and strength, the tides are turning in a positive direction.

Today we’re featuring three of the strong women we’ve talked to on Breaking Muscle Radio: Kalli Youngstrom, Eva Twardokens, and Artemis Scantalides. They come from diverse backgrounds – bodybuilding, skiing, and StrongFirst – but they share a love for lifting heavy and striving to reach their fullest potential.

Kalli Youngstrom is a champion bodybuilder and coach who specializes in nutrition. But like many athletes, Kalli’s career began with a different sport. For her, it was wrestling.

Kalli described why she got into wrestling and what it was like to compete in what was then a male-dominated sport.

In grade four I started wrestling, and eventually I dropped everything else to focus on wrestling. I wrestled at the national level through grade twelve and up to university, and then I had to actually retire because of injury and problems with concussions.

So that was the end of that, and then I had to find something else to do to keep me busy. I’m still competitive, and I can’t not be striving towards some new goal. I met my boyfriend and he was interested in bodybuilding, and that’s how I got introduced to the sport.

Kalli also played many other sports as a kid. So why did she focus on wrestling? She explained:

It was a unique thing, and originally when I started, my brothers wrestled, so that’s how I got interested in it. I would say it’s a little bit more popular in Canada for women than it is in the States still, but it’s really growing in popularity. Here I would say it’s 50/50 now, but when I first started it was definitely less.

There were certain years where I had no female training partners, so it was just me and my coach training with the boys. But I think I naturally excelled at it, and it was so challenging that I wanted to push myself in that way.

To hear more about Kalli’s story, her unique approach to training, and what she has to say about the Size or Shred program featured here on Breaking Muscle, click the link below:

Listen to the Full Podcast With Kalli Youngstrom Here

It’s a tradition to ask all of our podcast guests some bonus round questions to help us get us know them on a more personal level. Kalli’s bonus round isn’t included on the podcast, so this is its premier appearance. Here’s a sneak peek at one of Kalli’s answers to the question, “What’s your least favorite exercise?”

“Lunges. I hate lunges, and I’ll be honest – that’s one of those ones where you don’t do them because you hate them. That’s the one. But that means that’s the one you probably should be doing. Don’t tell my clients, who probably all have lunges in their plan!”

Click Play to Hear the Full Bonus Round With Kalli

Eva Twardokens is a two-time Olympian in Alpine Skiing (Albertville and Lillehammer ) and a twelve-year veteran of the U.S. Ski Team. She has won six National Championships, won a world Championship Bronze Medal, and is a World Technical Skiing Champion. She is also a Masters Weightlifting Champion.

Today, Eva works with clients to help them optimize their performance and health through smart training. We loved the insight she offered when asked what it means to be an athlete versus someone who just works out. Here’s what Eva had to say:

I think with exercise, it’s important to understand who you are. You need to quantify yourself and then qualify to work out. And so I came up with the classification of what I call the trainee. The first classification is your down-and-dirty athlete. This is a person who’s training, traveling, and competing 24-7. They’re not holding a job, and they’re paying their mortgage by doing their sport. Generally that person is either a professional athlete or an Olympian.

And then I have the exerciser, which is what I am today. I’m a person that wants to maintain my body composition and support the passions in my life.

It takes me back to a conversation I had with my father when I was totally going nuts over exercise and doing too much. I said, “Dad, exercise is perpetual. The more you do, the more you can do.” And that’s partially true, but he came back to me and said, “No, Eva, it’s kind of like a battery. If you run your battery low, you’re going to run out of gas…” And I was like, “No, no that’s so wrong!”

About five years ago I made an apology to my dad for fighting him on that and being such a jerk and know-it-all. I said, “You know what, you were right.”

Eva’s least favorite exercise? “Sumo deadlift high pulls. I think they’re just silly.” You can catch the bonus round with Eva starting at minute 39 in the podcast below.

Artemis Scantalides was a professional ballet dancer for 23 years. Then she received her black belt in kung fu. These days, she works as co-owner of Iron Body Studios. To top it all off, in 2014 Artemis became the ninth woman to successfuly complete the Iron Maiden Challenge, an extreme test of strength involving a 24kg kettlebell press, tactical pull up, and pistol. 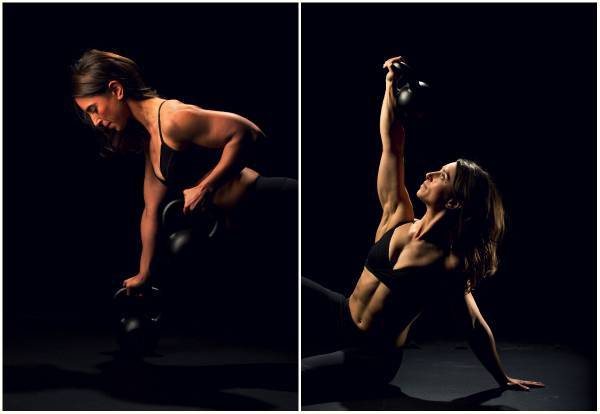 My mission with strength training definitely all started when I realized how amazing it was to be strong…[D]ance is beautiful, classical ballet is beautiful, and it will always be a part of me. But there are other things that, as someone who studied classical ballet for so long and danced with schools like the Boston Ballet and these really big, competitive schools – there are some challenges you deal with, especially as a woman in terms of your body type and self esteem, and if you fit in or don’t fit in. It can really scar you for life.

You have to figure out how to get your self-esteem back, get your confidence back, and find yourself again. And strength training helped me to do that.

Artemis also addressed the idea that keeps many women away from strength training – that lifting weights will make you bulky.

I try to educate women that in society, there is this misconception that women are just going to walk into the weight room and train for general fitness, two to three times a week, and then all of sudden you walk out the door and look like a bodybuilder. It’s a lot harder than that!

I educate women that number one, it’s genetics. How you’re going to build muscle is completely built on your genetic build, your body type, and how you build that muscle. So that’s number one.

Number two: we’re women. We do not have the testosterone that men have. We do not have that genetic makeup to bulk up the way men do. For the majority of us who are training for general fitness, it’s not gonna happen. It takes a tremendous amount of work, from nutrition to a specific weight lifting program to get there. So I educate women about what it really does require.

Listen to the Full Podcast With Artemis Here

Artemis also shared her answers to the bonus rounds questions in a previously unreleased podcast episode. Her least favorite exercise? Squats. “Squats are just really hard, and burpees because I do not enjoy burpees.” (We agree on the burpees.) To hear more of Artemis’s answers to our bonus round questions, listen to the clip below.

Click Play to Hear the Bonus Round With Artemis