Nia Shanks has put together yet another amazing training guide – the “Beautiful Badass Bodyweight Workout Guide.” With this program, you really don’t have much of an excuse not to get stronger. 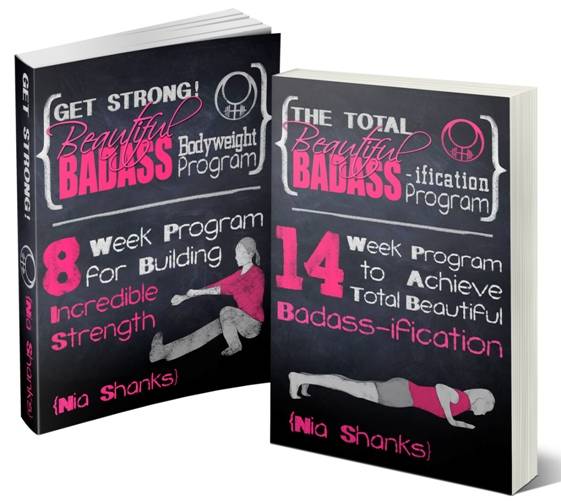 As you’ve probably heard if you work in the fitness industry, bodyweight exercise is on the rise. For the first time ever, bodyweight workouts landed a spot on the ACSM’s Annual Fitness Survey (the number three spot, in fact), and programs that utilize bodyweight exercise like boot camps are everywhere. With a pretty wide variety of exercises for all fitness levels and minimal equipment costs, it makes a lot of sense that people would be drawn to these programs.

My husband started doing Paul Wade’s Convict Conditioning program recently and has seen some impressive results. This really piqued my interest in bodyweight training, so I was excited to find out I was reviewing Nia Shank’s new bodyweight program, The Beautiful Badass Bodyweight Workout Guide. I also found out a few months back that I’m expecting baby number three in September, and I figure there’s no better time to try out a bodyweight program than when I hope to gain about thirty pounds.

When you purchase The Beautiful Badass Bodyweight Workout Guide, you will be able to download the program as a PDF document. Nia starts out by explaining the basics of bodyweight training – the benefits, what you need to get started, nutrition tips, and tips for determining your own starting point based on your training level. As usual, she presents this information in a clear and concise manner, and while she doesn’t waste any words you still get all the info you need to begin. 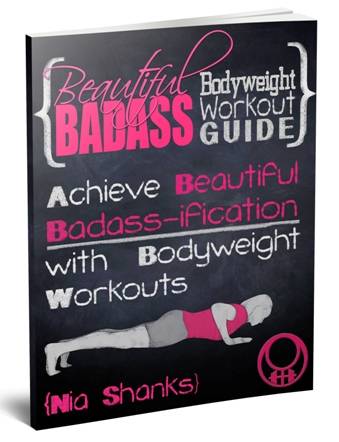 In addition to the written information and workout programming, you also get access to some videos Nia has provided to help you complete the program safely:

Not only do these videos demonstrate the basic exercises, but they also provide instruction in several variations, so you can really tailor each workout to your own fitness level. Nia also provides videos that explain and demonstrate some more advanced bodyweight training concepts: Rest/Pause, Tempo, and 1.5 Rep.

After the videos you dive into the training programs. Nia provides two programs: the Get Strong! Bodyweight Program and the Beautiful Badass-ification Bodyweight Program. I’m going to start by describing the second one, since it’s the first one I tried.

The Beautiful Badass-ification Bodyweight Program is divided into three phases and lasts approximately fourteen weeks. It’s a bit more involved that the Get Strong! Program and the workouts seemed more challenging to me when I read through it. I was in overachiever mode so I decided to start with this program.

This programming is based on simple progressions using the same variety of exercises in different combinations. You progress gradually by adding additional reps over the weeks. The formatting of each workout varies – some are timed supersets, others utilize tempo – but the basic exercises are the same. You can use different variations as you go, based on your level.

I followed this programming for about three weeks before I was hit with some crazy morning sickness around week seven of my pregnancy. I’ve never had morning sickness before during my previous pregnancies and man, does it suck. I figured I would take a few days off and then pick up where I left off, but it really didn’t let up for several weeks. I was getting discouraged at my lack of progress, so I decided to try out Nia’s simpler program and save the badass-ification for my second trimester, which will (hopefully) be more pleasant.

The Get Strong! Program has been a lifesaver for me during this pregnancy. It’s a simple eight-week program that uses the same workout format every time, while increasing the difficulty as you go. It only takes about twenty minutes (thirty if my children aren’t behaving) and I’ve already seen results. I also think it will be a good foundation to start the second program later in my pregnancy.

Of course, like any bodyweight program, these workouts have a limit and at some point you’ll probably finding yourself wanting to lift something heavier than your own weight. Nevertheless, following a good bodyweight program like this one consistently has one huge advantage, in my experience – you see results fast. Whether you’re an advanced trainee who is new to bodyweight programming, or a beginner looking for a way to get fit without having to purchase a bunch of equipment, The Beautiful Badass Bodyweight Workout Guide is sure to produce results – but be warned, it’s addicting!

“The Beautiful Badass Bodyweight Workout Guide” is available for $29.99 at NiaShanks.com.