The American Heart Association recommends that we consume more chicken, fish, and beans rather than red meat to protect our hearts, but the incoming president of the American College of Cardiology feels differently, at least somewhat.

Back in 2003, Dr. Kim A. Williams had concerns about his high cholesterol even though he was eating a diet that would seemingly be approved by the AHA. His diet consisted of “chicken, fish, no skin, no fried food, and no red meat.”

While Dr. Williams acknowledges that the relationship between the consumption of dietary cholesterol and blood cholesterol levels is complicated and can vary greatly from person to person, he decided to eliminate foods containing cholesterol – animal foods – from his diet.

Within six weeks of becoming vegan, his LDL cholesterol dropped from 170 to 90. While Dr. Williams is not advocating for the College of Cardiology to start promoting a plant-based diet (he says there needs to be larger and more extensive studies done first), he does recommend a plant-based diet to his higher risk clients because he knows it will improve their heart health.

If you’re following a diet with little red meat and are still struggling to keep cholesterol levels down, you may want to follow in footsteps of Dr. Williams and try a plant-based diet. Even if you don’t want to totally give up animal products, there’s no doubt that including more plant-based whole foods in your diet will be a positive for your health.

But where will you get your protein? Here are the five best and easiest to incorporate sources of plant-based protein.

You should be eating tons of these anyway, but did you know that greens like kale, broccoli, and spinach contain upwards of twenty percent protein? And in the case of spinach, roughly fifty percent? Dr. Joel Fuhrman and others routinely state that our goals each day should be to eat one pound of raw vegetables and one pound of cooked vegetables. That’s a sizeable amount of protein.

Beans, Lentils, and Other Legumes

Beans contain between thirteen to 22 grams of protein per cup. Soybeans contain the most at 22 grams, black beans contain 15 grams, and lentils contain almost 18 grams per cup.

In addition to their protein content, beans have a number of health benefits that warrant their emphasis in a healthy diet. Put them on top of giant salads, make bean chilis and soups, blend them into sauces, or just eat some as snacks. Vegan bodybuilder Derek Tresize even blends them into his smoothies when he’s trying to pack on more muscle. 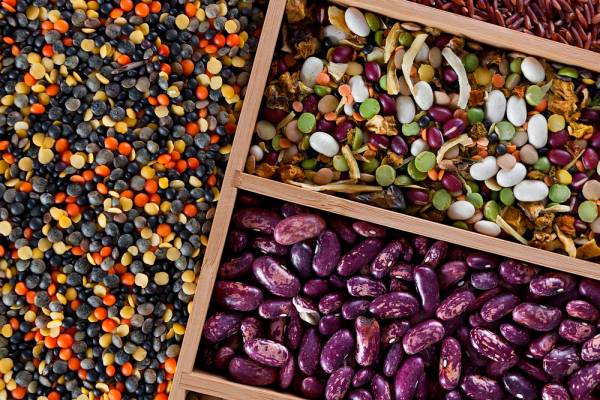 If you’re gluten intolerant, ignore this one. But if you don’t have a problem with gluten, then seitan is an excellent substitution for chicken or beef in just about any recipe, particularly stir fries. Long popular in Asian cultures, seitan is minimally processed (it’s made by washing wheat flour dough with water to remove the starch) and is about 75% protein.

Not only are nuts incredibly good for your heart, but one cup of chopped walnuts contains 17.82 grams of protein. Seeds like hemp and chia, in addition to being great sources of omega-3 fatty acids and antioxidants, are also rich sources of protein and have some of the most well rounded amino acid profiles on the planet. Top your oatmeal with nuts and seeds (just pay attention to caloric density) or blend a tablespoon into your next smoothie.

This may seem like a copout, but consuming a plant-sourced protein powder can be a quick, easy, and healthy way to help recover from a workout or to help with satiety over the course of a busy day. My favorite brands include Vega, Sun Warrior, and PlantFusion.