5 Reasons Every Kid Should Grow a Little Muscle

Studies have explored the benefits of strength training for kids, but what makes a child want to be strong? I decided to ask my four-year-old that question, and here’s what she said.

Originally I had intended to write this article about the benefits of strength training and muscle development during childhood. In fact, I actually wrote most of the article and then I realized it was dry, unoriginal, and uninspiring. Everything I wrote had already been said somewhere else and better. Meanwhile my deadline was quickly approaching and I needed a different approach.

As I sat at the kitchen table trying to figure out how to make this article interesting or at least different, my four-year-old (pictured at right), who was sitting across from me eating her lunch, asked me a timely question: “Mom, if I eat my green beans will I get really big muscles and be super strong?”

The lightbulb went off. We look to experts and specialists to tell us why kids should lift weights and exercise. But what motivates a child? We adults have our own reasons for getting stronger, like impressing a member of the opposite sex or having a nice tight six-pack when we wear a bikini. What about those younger members of our species who are less bound by social norms and expectations?

So after confirming that yes, of course green beans would make her as strong as Hercules, I asked my daughter a very simple question: “Why do you want to get big muscles and be really strong? What’s so great about that?” I asked her to give me five reasons, and after a long conversation we boiled them down to the following:

That answer seemed a little redundant so I asked her why lifting really heavy weights is a good thing in the first place. She said simply, “Because it’s fun.” We can boil down the redundant four-year-old answer and state simply: lifting heavy stuff is fun.  For children, strength training has been shown to improve self-esteem and focus. In one study, overweight children who began a strength training practice were more likely to continue than overweight kids who began a cardio routine. I think the fun factor has a lot to do with that. Running on a treadmill for an hour is a lot less fun than swinging a kettlebell or learning a handstand. 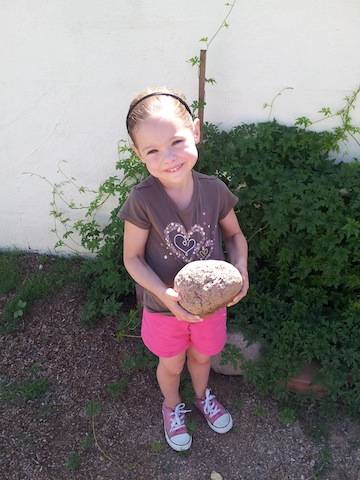 I asked her what she meant by “the little people,” to which she responded, “the poor, the weak, and the babies.” Maybe this isn’t something we think of very often, but being strong can also be of help to others. Think of all the movie scenes where the superhero pushes some gigantic object off a bus full of people just before they all perish.

3. “I want be strong so I can be the best at stuff…like fighting and running really fast.”

Weightlifting is a competitive sport for a reason. Competition and being the best – either compared to others or relative to previous personal performance – is a motivating factor for kids as well. Those moments of glory make a huge impact during childhood, and as long as competition is approached in a healthy way, it can help children in other areas as well, like academics and self-confidence.

4. “You can beat up bad guys if you’re really strong.”

About a year ago my daughter went through a hard nighttime phase. She had a difficult time falling asleep on her own and would come into her room saying she was scared of bad guys. Telling her there were no bad guys was not effective. Even if we could convince her they weren’t under her bed or lurking in the hallway, they were out there somewhere and she was scared of them.

Eventually we just had to admit that yes, there may be bad guys out there, but she’s stronger than them so it’s nothing to worry about. Just like learning certain self-defense can make you feel more sure of yourself as an adult, young children will also feel more secure knowing they’re strong enough to take on a bad guy.

5. “I can be a better Highland dancer if I get stronger.”

My daughter has been taking Highland dance since she was three, and is always working on exercises to get “super strong legs.” I don’t think she’s ever heard of crosstraining, but I could be wrong. Several studies have examined the role of strength training in improving athletic performance during childhood and adolescence. With a few exceptions, most children are not born specialists. They like to learn new things and explore different means of getting stronger and faster. A program like CrossFit Kids is a great way to build strength, teach children new movements and also improve in other athletic areas.

So there you have it, five reasons any child might want to gain a little muscle. You don’t have to wait until your child is old enough to start lifting weights, either. Here are my four-year-old interview subject’s top five favorite “no equipment, no excuses” exercises for building muscle and fighting bad guys: 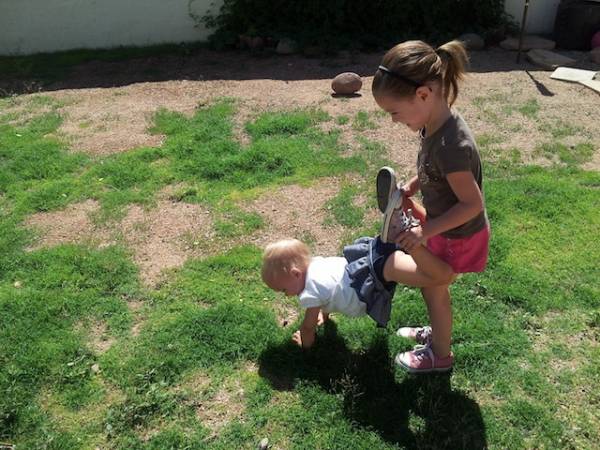 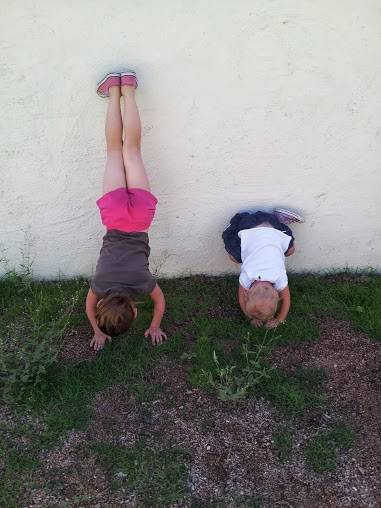