Parkour training has arrived – and it’s time for you to get on board. What began as a small group of French teenagers learning to flow through their city in the 1980s has grown up to become a global phenomenon with sponsored athletes, Red Bull events, and wide media coverage. From Seattle to Brooklyn, there are parkour-specific gyms popping up all across the country and footwear companies are scrambling to tap the huge market of devotees.

So what is parkour and why should you care? Parkour is a movement discipline that focuses on the ability to overcome obstacles with speed and grace.

Equal parts skill development and athletic conditioning, parkour prepares your body and mind to confront physical obstacles, much the same way martial arts prepares you to face off with an opponent. It’s helpful to draw a distinction between parkour and its cousin “freerunning” which places an emphasis on acrobatic elements, like flipping and spinning. To the purist, parkour is about the ability to move through an environment as efficiently as possible:

Forget the YouTube compilations you’ve seen of young men and women leaping between rooftops or taking large drops from buildings. Parkour is safe. To train it, you don’t need to expose yourself to unnecessary risks. Those videos highlight athletes at the top of their game, who have trained for years to be able to perform those feats with confidence.

To be sure, training parkour actually improves your overall safety. Learning to fall appropriately can save you from a broken wrist if you trip while walking down the street. Vaulting a trashcan might spare you a neck injury if you must dodge an out-of-control car. Scrambling up the wall of a dead-end alley could be your only option for escaping an assailant. Being proficient with all of those movements is a goal of parkour training and prepares you for survival in the world.

The fact that parkour is so inherently focused on functional skills is one of the reasons why you won’t see it disappearing anytime soon. Military personnel and police officers will start to incorporate parkour training, so they can pursue their targets faster. Search and rescue teams as well as fire fighting departments will also begin to drill the movements to keep them safer in the field. 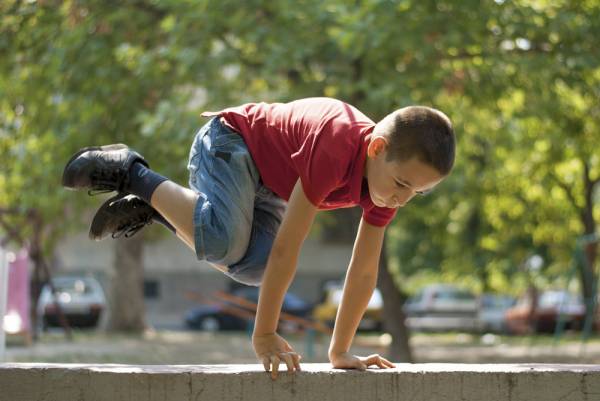 And you? Why should you be training parkour? Besides becoming someone who is better adapted to avoid peril, you’ll simply become a better athlete. You’ll be able to compete in the next Spartan Race, Tough Mudder, or obstacle race du-jour with greater confidence. You’ll improve your agility for trail running and board sports. And, if you’re so inclined, it could even help you make the cut to appear on American Ninja Warrior.

I’m 35 years old and I started training parkour three years ago. When I say you’ll benefit from parkour in the specific ways mentioned above, it’s because I have firsthand experience with all of those (even the American Ninja Warrior appearance). During work hours, I help run a physical therapy clinic in Portland, but in my free time I practice new skills and work on parkour-specific conditioning.

The parkour community is an amazing one, filled with awesome athletes and dedicated teachers. I’ve had a chance to connect with many of the best and am looking forward to sharing what I’ve learned from them.

When trying to give an overview of the movements that are unique to parkour training, these seven skills draw the most attention:

If these activities remind you of how you entertained yourself on the playground in elementary school, that is because they are nearly identical. We all did parkour as children. Watch a child jump from rock to rock or climb in a jungle gym. Aside from the improved coordination that comes with age, there really isn’t much difference in practicing parkour as an adult.

Aside from just being able to run a course with speed, the other big concept that you’ll hear mentioned in the parkour community is the idea of movement flow. Flow can be described as the ability to link movements together in a smooth and effortless manner. Someone with good flow will make it look as if they have floated over a series of obstacles. Contrast this with being heavy, taking unneeded steps, and unnecessarily arresting your motion. 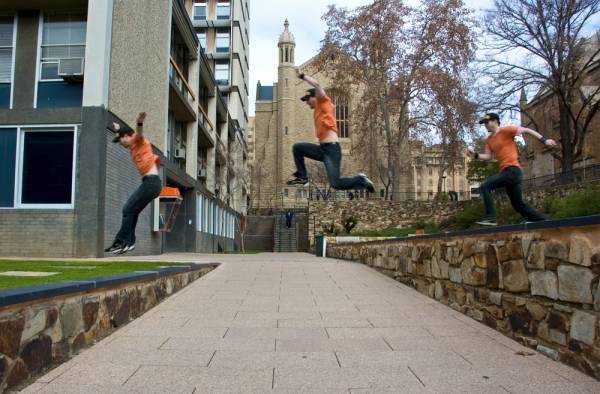 Now, learning from an experienced practitioner is always the best way to develop a new skill. You wouldn’t try to reinvent karate by yourself, would you? If you absolutely can’t link up with someone in your city, there are a few great online resources to help you figure out movements. American Parkour is one of the most established resources with a large tutorial library. You should also check out Ryan Ford’s Demon Drills as well as the Tapp brothers’ website, Learn More Parkour.

In my upcoming articles, the emphasis of my column will be on exposing you to many exercises that will help you gain the strength and skill needed to prepare you for parkour. Many of the movements are phenomenal as stand-alone exercises and my guess is that you’ll fall in love with a lot of them. Whether you’re a CrossFitter, mixed martial artist, or endurance athlete, the movements should expand your fitness repertoire in a positive way.

Parkour is here to stay. Within youth culture, it may soon eclipse skateboarding as the new favorite after-school pastime. And, if you’re a gambling person, you might even bet that in the next twenty years it will become as big as that once little sport called “jogging.”

It’s time to get aboard the parkour movement and start training!

Here is a list parkour-specific gyms across the U.S.:

In Canada, try to visit:

Do you train parkour? If so, where?

Ben Musholt is licensed physical therapist who has practiced in Portland, Oregon since 2001. He is a co-founder of Beyond the Clinic physical therapy, and also runs BPM Rx, Inc., which is an online exercise prescription program. He has a diverse movement background, spanning board sports, martial arts, and gymnastics.

He has trained parkour for many years and is a certified parkour coach through APEX Movement. He operates the blog Parkour Conditioning and was a contestant on American Ninja Warrior in 2012. You can see him in action on his YouTube channel BPMRx. He is also the author of the Mad Skills Exercise Encyclopedia.

Ben loves to move and enjoys helping others become better athletes. Whether conducting injury prevention seminars, leading garage workouts, or romping around the park, he is always in motion. His goal is to do three fun physical activities each day: Try to keep up!