I’ve been thinking a lot lately about staying where things are safe – in love, in life, and in fitness. Change is hard, but embracing it can take you places you never thought you could go.

“Struggling and suffering are the essence of a life worth living. If you’re not pushing yourself beyond the comfort zone, if you’re not demanding more from yourself – expanding and learning as you go – you’re choosing a numb existence.

You’re denying yourself an extraordinary trip.”

It’s hard to change. I’ve been thinking a lot lately about comfort zones and staying where things are safe – in love, in life, and in fitness.

I began training when I was eighteen. I’m sure many of you don’t know I’ve been hanging in the iron game that long. I did my first figure show when I was only twenty, and since I’m mere months away from my thirtieth birthday, I’ve spent the better part of a decade being what I now call a globo gym addict. Fitness did not exist to me unless it was within the four walls of a Gold’s or an LA Fitness. I went five, six, sometimes seven days a week and if I was in prep, I went twice a day. I’d be there reliably waiting on the doorstep of Gold’s at 4:45am to get in there as soon as the doors opened to do my fasted elliptical session. I used to joke I lived in the gym. But really, I had no concept of fitness, only what I thought fitness was – machines, dumbbells, and cardio machines.

But that’s who I was. I was all about those hammer strength machines, leg presses, tri/bi days, and chest and back days. At the time, I guess I loved it. But after several years of training that way, over and over, I found myself becoming mentally detached from my training. I wasn’t in tune with myself when I lifted. My training did nothing for me spiritually or mentally. Eventually, I began to just feel void. I would dread the three sets of ten I had to do on the leg extension or the four sets of twelve on the cable crossover and the incline treadmill walk afterwards. I felt I just needed something more.

Which is what led me into a CrossFit box. My first workout was push presses, GHD sit ups, tire flips, and hammer strikes. I had never flipped a tire, used a hammer, or handled a barbell with Olympic plates. These were not normal “fitness” objects to me. I was challenged. I was uncomfortable, and I was being forced to change on the spot. To this day I can’t tell you what the reps were, or how long the workout took me. I only remember I was wrecked the next day with a heating pad on my midsection to quiet my aching abs. I had finally met my match. I walked in there thinking I was strong and found out that indeed, aesthetic musculature does not translate to functional strength at all.

For the next few months I went to the box and did one-on-one training two times a week, picking at new movements and having my ass handed to me each and every time. I moved odd objects. I ran outside. I had my first experience on a C2 rower. I peddled sprints on an Airdyne. I played with kettlebells, climbed ropes, and was introduced to the rings – which still are a nemesis. Every time I went to the box I had my notion of “fitness” challenged. There were no mirrors there. No machines. No pretty motivational posters. It was gritty and different and nothing about it was familiar or comforting to me. 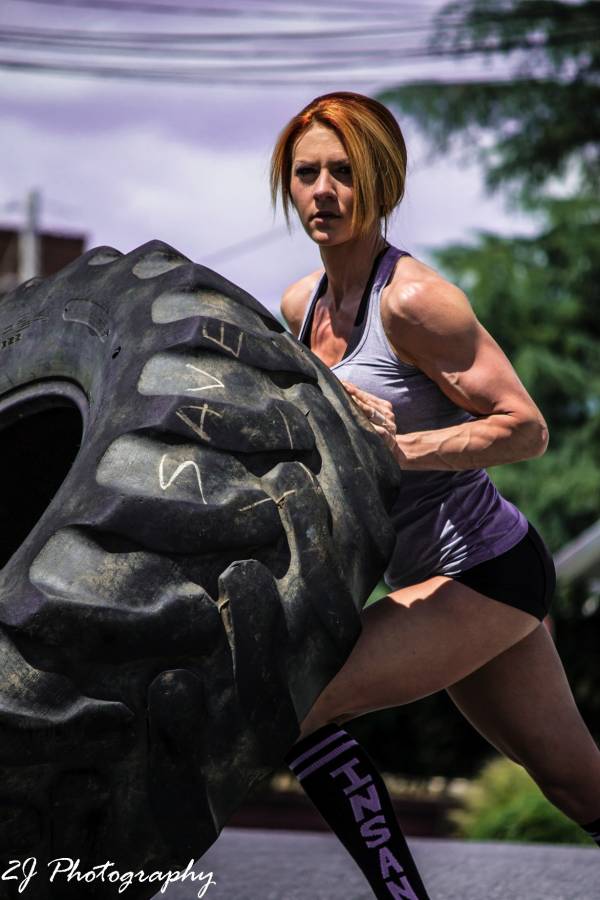 I believe there are two types of people in the world. There are people who embrace change and challenge, and are oddly drawn to having their limits pushed. Then there are people who are challenged and who cannot handle it and shrink back. By far, I’m the former. I was terrible at nearly everything I tried in CrossFit. And I was horribly addicted.

At the time, I tried about a billion different ways to tie CrossFit into my bodybuilding training. I tried making up my own workouts, doing upper and lower body splits, adding in some sprints, and then my steady state cardio. Frankly, I was making a royal mess of things.

And somewhere, around March or April of 2013 I realized that I just needed to let go a bit. I needed to stop trying to fit in the “CrossFit” box and stop trying to fit in the “Bodybuilding” box and just work to fit into the “Alli” box. I could run, row, kettlebell swing, rope climb, and still be a figure girl. I could do lateral raises, face pulls, and bench presses and still be a CrossFitter. My fitness could be both. It could exist at a gym, in a box, outside or inside, in a pool or a lake, on a hike, in my garage gym, or right in the very spot I was standing. My fitness didn’t have to have labels, limits, or definitions.

“I do believe that when we face challenges in life, it’s an opportunity to build our character, to reframe our beliefs, to challenge our values, to bolster our courage, and to generate inner strength.”

We live in a society that resists change. It’s a shame, because reluctance to embrace change results in a life not truly lived. You have to learn, grow, and be challenged. Look outside the box and outside of the parameters of what you think you know. Take a different viewpoint and don’t be content to just do what everybody else does.

You know, every so often, I think about my life before – doing two hours of cardio a day and set/rep, mind-numbing, soul-less bicep and tricep days- and I realize that who I am now, and my new open, all-inclusive notion of fitness is just so much better. It’s not that bodybuilding training is bad, but it’s not the only way. And it’s not always the best way. You just have to open your mind up to other methods. You have to embrace change, accept the challenge, and allow yourself to evolve.

“Out of challenge, out of change, grows progress.”

Today’s Thought: “I do not choose to be a common man. It is my right to be uncommon…I prefer the challenges of life to the guaranteed existence…” – Dean Alfange