From CrossFit Athlete to Physique Competitor – My Fitness Journey

When I found CrossFit in 2010 it was exactly what I needed, having only a year of sobriety under my belt. But before long I ventured on to my next challenge – competing in a physique competition.

I’ve been through a lot of shit in my time. I grew up an only child in an old mill town turned ghetto right outside of Pittsburgh, Pennsylvania. My mother struggled with a horrible drug addiction that eventually took her life. My father raised me alone and spoiled me rotten to make up for all the crap she put us through. As soon as I could, I quit college and moved south away from my mother’s street walking and endless arrests publicized in my little town’s paper.

It wasn’t long before my 21-year-old nights out turned down a road resembling my mother’s. I always was chasing something and I could never get high or drunk enough. I’ve partied with the best of them on top of the highest mountains and I’ve also seen the depths of hell. I’ve always pushed the limits above and beyond what they should be. I’m not good at moderation. Luckily, a few stints in rehab and nine lives later, I picked up a wonderful husband and daughter that make my world go round – and then fitness happened.

When I found CrossFit in 2010 it was exactly what I needed. Having only a year of sobriety under my belt, drinking the CrossFit Kool-Aid filled a huge void and helped my recovery along. It was extreme and different; it gave me the high I craved. The community is awesome and the support and camaraderie is unmatched. At this same time my father was living with me because of his Alzheimer’s disease. I was newly sober and the task of taking care of him brought some of the toughest days of my life. He was always taking care of me before then. My gym family was there for me and I found myself at the box more and more. Within a year I was invited to practice with the team and in 2011 competed with them at the CrossFit Games.

Not long after the games my progress began to plateau. I was in programming limbo and constantly achy, stiff, and hurting. My body didn’t look the way I wanted it to for as much as I busted my ass. In turn, I got very bored. Around this time my father became quite ill. He passed at the end of 2012. We were so close that even when I got older and moved south he retired from the public school system and moved to the same town as me. We were inseparable best buddies and his passing was the hardest thing that’s ever happened to me. I knew I needed to take that extra time and energy I would spend with him and immerse myself in a new positive goal, instead of sitting around feeling sorry for myself. He certainly wouldn’t have wanted that for me.

So, I decided to compete in a physique competition.

Leaving CrossFit is basically unheard of and was a hard decision, especially since I was leaving for the exact thing we make fun of – the globo gym! When I started working out with only isolated exercises I realized I had a ton of weaknesses, especially in my hamstrings and shoulders. I quickly realized that a pair of 5lb dumbbells could be way more humbling then a loaded 95lb bar. I also realized how much my CrossFit experience helped condition me for this type of training. You see, I don’t stand around like the rest of the meatheads doing three sets of ten with a couple conversations at the water fountain in between. I get in there and do super sets or 100-rep isolated sets until muscle failure. I leave it all on the floor, just as if it was a WOD. I really enjoyed this new training. Especially since I was seeing great results and I was getting stronger all while my body wasn’t stiff and hurting. It was great! 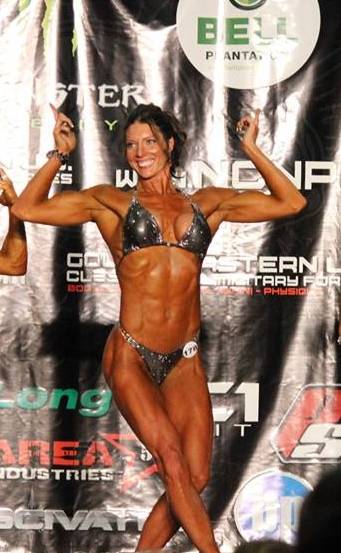 A lot of these results and energy came from nutrition. Before I took on this goal I was only eating a couple times a day, stuffing myself with meat and paleo banana bread in the evening. Training my ass off and only having a protein shake the entire morning was not sufficient fuel. Once I learned how to properly fuel myself, the magic started to happen. I ate every three hours, religiously, and it pumped up my metabolism and prepared me to start dieting down for competition.

Working out is never the hard part for me. I love it. It is my passion and my sanity, but dieting down, that’s a different story. It was really, really tough – both physically and mentally. It took so much dedication that it was nearly as hard as getting sober. Packing and measuring, hours of cardio and weight training, posing practice, and routines. All while eating hardly any carbs or fats and taking care of a family. Honestly though, it was so extreme I thrived. It was a great experience and even on stage I had an absolute blast. I glowed up there and was sad when it was over. Taking that madness on and succeeding is something of which I will always be proud.

What I learned throughout this experience is that being more open minded about fitness is the way to go. I love it, but CrossFit is certainly not the only kind of fit. I learned not be an elitist a-hole to people who may want to train differently then me. I understand that I don’t have to kip everything. After using machines like hack squats and leg curls I am stronger – way stronger – then I was before. Things like shoulder raises, Arnie presses, and shrugs have developed my shoulders where I was really lacking before. My muscles are sore, but my joints are not. I’ve also learned that few things piss me off more then someone curling or doing quarter thrusters in the only squat rack. And most importantly, I learned you need to fuel your body with real food throughout the day if you want real results.

I have a great balance now. I train CrossFit a couple times a week while also keeping up with strength training at the globo gym. Changing up my routine and forcing myself to go strict on the movements (yes I use the bands for pull ups when needed) helped me tremendously. My muscles are more defined and I love it. Globo abs are even catching on at my current box (even though everyone may not want to admit it). That makes me happy because it means people are seeing my results and they want it too. 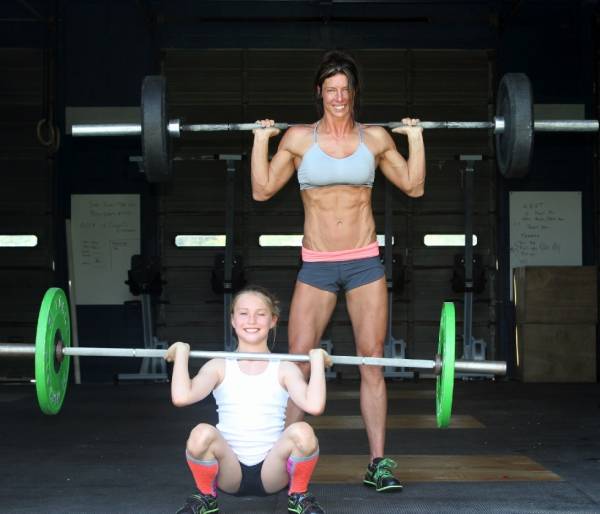 In October I plan on competing at an Olympic lifting meet with my daughter. She is ten and is the national champ in her age division. She is totally going to kick my ass, but I don’t care. Standing in front of hundreds in a tiny bling-covered bikini being judged on nothing but appearance has given me enough confidence to take on just about anything.