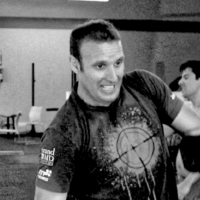 Daniel Tromello was a three-year nationally recognized defensive back at Occidental College, and holds the interception record there in just three recorded seasons. Upon earning his Bachelors degree in 2008, Daniel played arena football for one season in Illinios, and then overseas in Germany for another season.

After returning home, Daniel coached the sophomore high school basketball team in Westlake, California to a league title. He also worked as the assistant defensive coordinator and defensive backs coach at Moorpark College, where he helped coach the defense to a number one state ranking.

Daniel found CrossFit in 2009 while training for the NFL combine, and quickly fell in love with it. Since then, Daniel has become both a coach and competitor in CrossFit. He has helped people of all ages to reach their desired fitness level, and credits CrossFit for helping him achieve his own.

Daniel retired from football in July of 2011, after being a part of The US National Team, on which he won a gold medal. Daniel has been an individual CrossFit regional qualifier three times, as well as a three-time team competitor. He now is considered a peak performance specialist, and works with people of all walks of life.