Breaking Down the CrossFit, #SugarKills, and Coke Debate

The real story behind a controversial tweet from CrossFit’s social media team.

CrossFit, Inc., is out to rewrite the script of fitness worldwide – more so than they have already, which is a lot. CrossFit has truly revolutionized the fitness industry and I have never been reticent about saying that. But not content to rest on their laurels, CrossFit appears to have its sight set on global wellness – changing the way people look at health, nutrition, hydration, and more.

CrossFit spreads its messages about health through a worldwide network of affiliates.

The Growth of CrossFit

There have been, over the course of history, a lot of innovators who started in a garage tinkering and whose ideas revolutionized the world. Steve Jobs, Nikola Tesla, Jeff Bezos, Larry Page. People who started with an idea, a theory, or a system that grabbed hold and then, by virtue of the relative success of that system, were able to parlay successive advances onto the original idea. Jobs, for example, had no idea he’d be responsible for revolutionizing the way we use phones when he first set up in his garage trying to create a new kind of personal computer. One thing led to another, and today, we have iPhones.

Similarly, When Greg Glassman was first creating a methodology in his gym in Santa Cruz, California, he had no idea whether it would catch on, that there would be a CrossFIt Games, or that some day the company would grow into a monolith poised to take on bigger issues like over-hydration, obesity, and licensure concerns. But, that is the direction in which the company has grown, and the power it now wields to get the eyes and ears of healthcare professionals, the fitness world at large, and us, the buying public.

“CrossFit is like the super-rich hillbilly who belches loudly at a fancy dinner party – he’s got more money and more power than you, and he ain’t-a-gonna apologize.”

Because CrossFit is most likely still approaching the apex of its growth, it and Glassman are in a position where they can operate with a devil-may-care approach, unapologetic and brash, because that is exactly what has worked for them since day one. You will never convince the creator of a successful formula that his or her formula is tainted if everyone is buying the formula. Like Heisenberg’s blue meth, demand well exceeds supply and as such, no one tinkers with the formula.

Why Are We Talking About This? 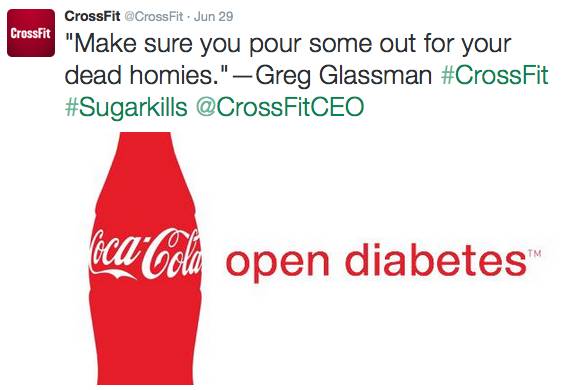 CrossFit, via its social media team (CFSM), tossed a grenade into the diabetic foxhole with this tweet. Now, let’s look at the history of why this tweet was sent.

The nexus between CrossFit and Coke is complicated. This issue is not as simple as “CrossFit is against sugar.” You can read the entire story on the Russell’s blog, or allow me to reverse-engineer for your reading pleasure:

The biggest threat to CrossFit’s larger affiliate system right now is not Coca-Cola – it’s the ACSM and its cronies. CrossFit is battling the ACSM and NSCA (National Strength and Conditioning Association) who are seeking to discredit CrossFit as a certifying body and, according to CrossFit, are seeking to do so via overblown injury reports and colluding to require certification.

In fact, if you take a scan of the Russell’s blog, you will see that battling these entities has become nearly a full-time job. Gone are the days where the “Russes” main function was to snuff out Ben Smith’s Dad and Drywall. Things have gotten much more serious over there.

So let’s get back to the tweet. CrossFit doesn’t really have a beef with Coke because of the sugar content of their drinks. It has a beef with Coke because it is aligned with the ACSM in attempting to corner the market on certifications. How do I know this? Well, for one, my friend Russ Greene added this comment to my generic Facebook post about CFSM shooting themselves in the foot:

If CrossFit were really looking to stare down the barrel of sugar, they would have mounted a massive campaign against – sugar. I get why they want to goose Coke and Gatorade, because Coke and Gatorade are the two biggest sponsors of the ACSM, CrossFit’s real enemy. And frankly, I support them in their fight, as do a lot of even the most outspoken critics of CrossFit.

But using the #sugarkills hashtag in a tweet against Coke with a quip about diabetes is simply a fairly thinly disguised prick against the ACSM. CrossFit likes to engage in the “death by a thousand pinpricks” method of disassembling their adversaries, and this is merely one of those pricks. Again, I see zero tweets with pictures of stacks of Lofthouse cookies at the local Piggly Wiggly or aisle after aisle of sugary snacks. It’s all just about “big soda” because big soda sponsors the ACSM.

And, I would be more apt to believe the “no sugar” part of the “Eat nuts and seeds” mantra and the #sugarkills hashtag campaign if some of CF’s biggest ambassadors weren’t constantly posting Instagram shots of their Hagen Daz and doughnuts. 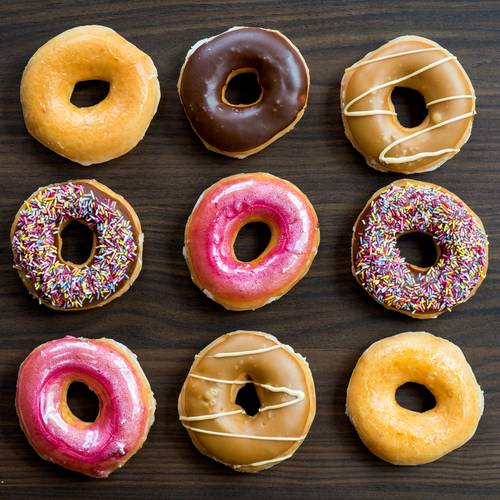 Did CrossFit Go Too Far Again?

Finally, on the tweet itself, we come full circle to my opening sentiments about the impunity with which CrossFit operates. I get that the type 1 diabetics were highly offended. Completely. If someone made a blanket statement like “overweight people are just lazy” or “alcoholics are just mentally weak,” there would be a platoon of people screaming, “Dude, you have no idea about my specific situation and you have zero right to generalize.”

“It has a beef with Coke because it is aligned with the ACSM in attempting to corner the market on certifications.”

Similarly, equating diabetes in general with sugar consumption paints with a broad brush that highly angered all of the people afflicted with type 1 out there who have never eaten a single grain of refined sugar yet still suffer. But holding your breath for an apology from CrossFit is like waiting for Brigadoon to appear: it’s gonna be a while.

CrossFit is like the super-rich hillbilly who belches loudly at a fancy dinner party – he’s got more money and more power than you, and he ain’t-a-gonna apologize. In fact, he is proud of the quality of the belch. He thinks it’s funny and cool, and his minions all laugh with him even though they are secretly put off. If you complain, he’s just going to belch more loudly, because he knows it gets your goat.

CrossFit is Rodney Dangerfield in Caddyshack. Guerilla marketing and motocycle-gang management style not likely to change any time soon.