You’re in the middle of a one-minute max effort rowing sprint. Your legs are full of lactic acid and feel like they might fall off. Your lungs are on fire and your heart rate is through the roof. There’s no way you can sustain this effort for another second. You have pushed to your limit.

Or have you really pushed to your limit?

What if I told you that you have never actually truly maxed out during a workout because fatigue is mostly just an emotion holding you back from pushing harder?

Consider this for a definition of fatigue:

Fatigue is a brain-derived emotion that regulates the exercise behavior to ensure the protection of whole body homeostasis.

This essentially means your physical abilities (i.e. your performance) is not actually dictated by your actual physiological state. It’s dictated by your brain protecting you from going to failure.

In an article written by Tim Noakes—a South African scientist and exercise science professor at the University of Cape Town—he sets out to answer the question of why athletes stop before they reach their physical limit.

“The presence of the noxious symptoms of fatigue must indicate that exercise cannot be regulated solely by an inevitable and unavoidable failure of skeletal and or cardiac muscle functions,” Noakes said.

Thus, Noakes developed a theory—the Central Governor Model for fatigue—which basically argues that when it comes to fatigue during exercise, it’s all in your head!

In fact, he argues that other common performance influencers, such as sleep, yesterday’s training volume, fluid loss, heat, thirst, hunger, motivation, what you ate that day, if you drank the night before, glycogen storage, etc., aren’t as influential on your performance as your brain and your perception of fatigue.

Your Brain May Be Fooling You

He might be onto something: After all, you never actually recruit all of your skeletal muscles during a workout. You use between 35 and 50 percent of them during endurance training and only around 60 percent of them when you’re supposedly maxing out.

This isn’t to say there aren’t physiological changes happening in your body when you become overcome with fatigue, because there are.

It’s only to say your brain, and the emotions associated with fatigue, are likely holding you back more than you realize. And if you have ever misloaded a barbell and PR’ed by accident, you know what I’m talking about: Your perception of what you think you’re lifting clearly affects your performance!

What about the fatigue I feel from not getting enough oxygen to my muscles?

What about when I’m breathing so hard at a 180 heart rate? If I keep going at the pace I’m at, won’t I pass out because not enough oxygen is getting to my muscles?

Not true. Your perception that you need all this extra air or you might die has little to nothing to do with your physiological respiratory needs in that moment. It’s but a panic response in the body.

In fact, many of us breathe more than we need to during a workout, and sometimes this actually makes things worse, as you can actually get rid of too much CO2 in the process. At the extreme end of this is hyperventilation.

The thing is your blood is almost always fully oxygenated and you need CO2 to get oxygen to your tissues. So it’s possible for your blood to be fully oxygenated, but if you’re burning off too much CO2 from breathing too much, then the oxygen doesn’t always get to where it needs to go—to your muscles and tissues.

While knowing this information is helpful, unless you learn how to breathe more effectively, you’re likely going to continue feeling panicked by the idea of not getting enough oxygen and slow down as a result.

In light of this phenomenon, here is a drill you can do to improve your breathing and help calm you down so your perception of fatigue stops killing your performance.

You can do these with various movements, but let’s choose a simple one first: The push-up.

In short, air hunger drills help you practice and improve your recovery, as well as teach your body to relax when it feels overcome by fatigue. 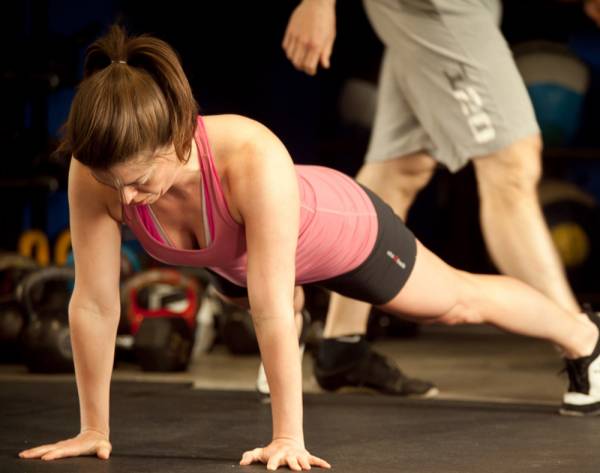 “Air hunger” is simply that feeling you get when you feel like you must breathe soon, or else doom is around the corner.

The easier this gets—via push-ups or air squats or even a 400 meter run—the more it will translate into metabolic conditioning workouts, and the better your performance will be.

Emily Beers is a freelance health, fitness and nutrition writer and a strength and conditioning coach at MadLab School of Fitness in Vancouver, B.C.

A former college basketball player and rower, Emily became heavily involved in CrossFit after finishing her Masters degree in journalism in 2009. She competed as an individual at the 2014 CrossFit Games. Emily's work can be found at CrossFit.com, as well as at various health-related companies, including Precision Nutrition, The Whole Life Challenge, the MadLab Group, and OPEX Fitness.