While the testing you may go through will be the same, how you get there, and what you need to focus on will be different. 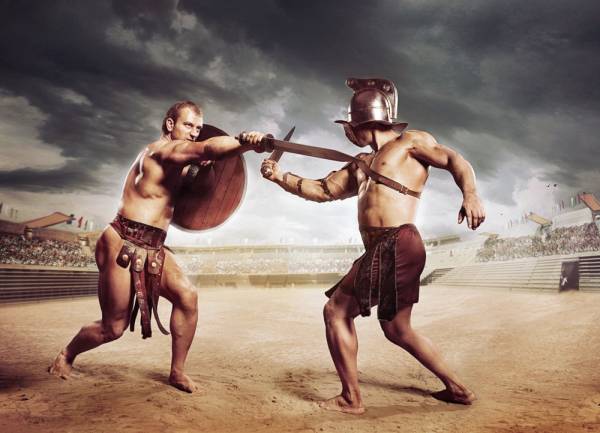 We all know “that guy.” We’ve all got that one friend. The friend who always seems to have a better story than everyone, yet no one has ever seen him do anything. And nowhere is this more obvious than when it comes to training for warriors.

When it comes to talking tough, “that guy” is the king. He fought a Gracie in an underground parking garage in Japan, yet seems to pronounce all the Gracie names with an “R” and not an “H.” He’s the guy who is unemployed but “works for the government” and tells stories about knife fights with Pakistani Taliban in stairwells. (And yes, I’ve actually had someone tell me both of these things, although, thankfully, it was two different people. The guy who told the Gracie story told me the son he fought was Pablo Gracie.)

The thing about combat is that since we crawled out of the ooze and figured out how to turn a stick into a club, we have been fighting. It is far more likely that the world’s oldest profession is fighting, and that the world’s other oldest profession came later as a way to keep troops occupied between fights. In other words, we know what works and what doesn’t as history gives us real clues on how to create effective fighters, whether this is in armed or unarmed combat.

A few years ago everyone was signing up for boot camps, but for some reason now we’re all keen to be SEALs or Rangers. Rather than write you a cookie-cutter plan for recruit or Special Forces selection, instead I’m going to tell you why you don’t want those plans. And for those of you who are actually thinking about attempting selection into one of the various special groups, here’s some things to keep in mind.

For starters, there’s a fair chance that where you’re starting from is different to where a friend of yours might be starting from. While the testing you may go through will ultimately be the same, how you get there, and what you need to focus on will be different.

If You Have a Power Sports Background

If you’ve competed in football (American football to non-U.S. based readers), then you’re likely quite big and strong. Likewise, if you’ve done field events like discus or shot put or competed in lifting sports like powerlifting or weightlifting, then you’ll have some aspects of the testing nailed down already and will likely cruise through pack marching as the weights will seem like nothing to you. But, you’re also likely to think that anything over 100m is a long-distance run and you probably haven’t trained over five reps in years.

I have bad news for you. You will need to get used to running and doing high-rep bodyweight conditioning. As an example, until only a short while ago it was a mile run to and from the beach to the chow hall for BUD/S candidates to eat. That adds up to six miles (10km) of running each day – just to eat. There is also a timed run of four miles on sand in wet boots and pants. (Standard time is 32 minutes, which equates to 8min/mi or 5min/km). Add in that bigger guys will sink into the sand more, and that running on sand expends 63% more energy and you have your work cut out for you.1 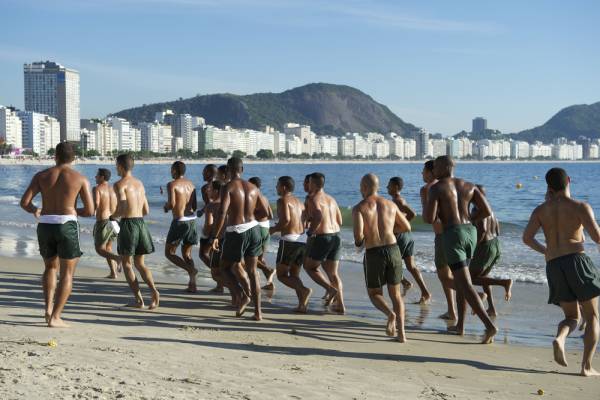 Your plan for the next six to twelve months should be to forgo a lot of the heavy weight you’ve been lifting. Focus on the things you’re not good at, as it will take some time to build endurance. Don’t worry about losing some muscle. It’s only slowing you down anyway.

If You Have an Endurance Background

This is the other end of the spectrum. Chances are you run quite fast and swim like a fish. The SEALs often say that what they’re looking for are triathletes. Yet most triathletes I know are so puny they can’t do a single pull up, and with many organizations having minimum standards of twenty or more pull ups, you’ve got some work to do.

While your heart and lungs may be well conditioned and you won’t struggle at all on the timed runs, you may suffer badly during PT. Most endurance athletes are seriously lacking in upper-body strength and will need to focus all their attention on gaining enough muscle and strength to get through even the basic physical standards. While they may lose a small amount of running speed, the extra warmth created by being a bit bigger will help them when it comes to being cold for long periods of time, as well.

If this is you, you’re going to need to work on strength. Some good ol’ fashioned 5×5 of squats, deadlifts, and bench press will become your new best friend, along with doing pull ups constantly. Don’t be surprised if it takes a year or more to develop the necessary strength to go with your ample endurance. Don’t neglect running entirely during this time, but you only need to do enough to keep your speed and endurance, which may be as little as two shorts runs during the week and one longer run on a weekend.

Run, Run, and Run Some More

Any military training plan that is minimal on running you don’t need to waste your time with. If you have a firm running base, and are only heading to basic/recruit training, then you may be able to get away with that. But if you’re looking to get into any of the “special” groups, then you need to run, run, and run some more. 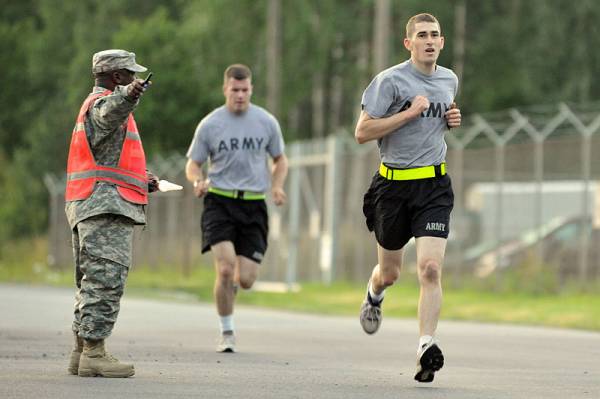 A quick look at the Australian 2nd Commando Regiment suggested training plan shows a dedication to running at least twice per week, as well as swims and pack marches. But remember, this is the bare minimum and the Commandos expect candidates to add their own training on top of this to address their own weaknesses. If you are aiming for the SEAL teams, then add in that you need to be able to run six miles daily just to eat, and figure out if that is enough running for you.

In the 8 Weeks to SEALFit plan, Mark Divine sets out a great training plan that shows exactly how important running is to those wishing to enter Special Forces selection. The baseline/break-in plan that is comprised of four weeks of training performed over five days has fourteen runs in a possible maximum of twenty sessions. In the actual Advanced Operator Training eight-week plan, there is running on every single day except two (46 workouts out of a possible of 48). That should give you a clue as to how important running is.

The Necessity of Ab Work

The other obvious flaw I see in many operator-themed workouts is a lack of direct abdominal work. Yes, I know what McGill says. Yes, I know that doing a lot of crunches may hurt your back. But do you know what it’s like to haul a sixty-pound pack for eight hours with a midsection that’s not ready for the job? Then there’s the other camp for abdominal training that says that you only need a few low-rep, high-tension exercises to make do. But if you need your midsection to have strength endurance for carrying high loads for hours at a time, what good will it do you to have only a few seconds worth of endurance?

The SEALFit plan averages over one hundred reps daily and quite often has as many as four or five hundred. A SEAL friend of mine does twelve-minute plank sets alternating from one arm to two and then to the other arm on the minute for multiple rounds. Remember, for BUD/S candidates you are going to literally spend hours of your weeks either in plank or doing flutter kicks, so developing huge amounts of endurance in those muscles is going to be enormously beneficial.

One of the things I learned to be careful of when I was attempting SAS selection was how much time I spent running in boots with a pack on. I’ll be blunt and say that it’s a dumb idea. If you’re going to load up, then make sure you walk and save the running for another time.

If you do want to get in some faster work with weight, then I suggest you use a weight vest and choose your boots appropriately. A good blended session that will address many of the elements you’ll need to be successful is the CrossFit Hero WOD “Murph” performed wearing a twenty-pound (ten-kilogram) vest. And if you really want to kick it to another level, do as Divine suggests and finish the weighted “Murph” with a further three miles (4.5 kilometers) of unloaded easy running. 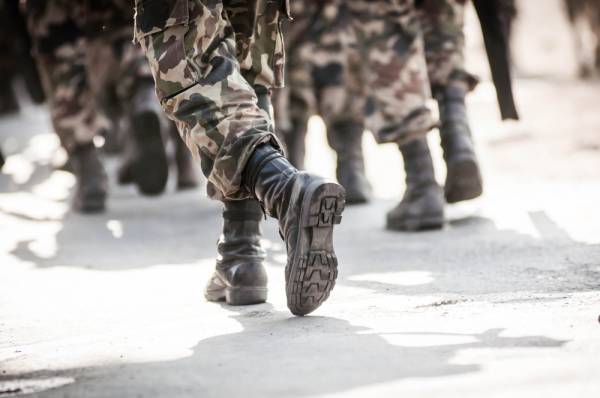 If you think there’s a strong hint that you need to run, run, and run some more, then you’d be correct. Divine suggests that in preparation for SEALFit’s three-day Kokoro camp that candidates complete a half Ironman first. And remember, Kokoro is only three days, while the majority of actual selection courses are three weeks or more. So, if you need enough stamina for a half Ironman to do three days, then you can multiply that out by three or four times to get to the point where you have enough endurance to cope with real-life selection courses.

Further Resources for Your Training

The bottom line for any type of selection course is that you will never be fit enough and at times you will struggle. That is where the mental preparation strategies that Divine lays out in Unbeatable Mind come into their own. Don’t take the advice of people who think cardio is a form of weakness when it comes to your preparation. While strength is an important element of your preparation, fitness, stamina, and work capacity are far more important.

Look out for our free Special Forces workouts starting 05/26