Training to Increase Your VO2 Max

VO2 may be largely genetic, but it can be influenced by training – by as much 15%. That would take me from a 57 to an incredible 65.5 and potentially drop more than twenty minutes off my marathon. 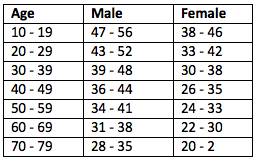 When I was a kid and was forced to run in my school competitions it would always amaze me at how fast some of the kids would run. It wasn’t like I didn’t try or train, but somehow there were just these kids who would be blazing fast with seemingly no effort. Naturally, I didn’t like those kids much.

As I’ve gotten older I’ve seen it time and time again. I train with everything I have and some guy who does half of what I’ve been doing waltzes past me and beats me to the line. Have you ever stopped to wonder why some people are just so much faster than you, despite otherwise seeming to be similar? How can two people who train the same, weigh roughly the same, and are roughly the same age perform so differently?

I’m sure if you’ve hung out with any endurance aficionados you’ll have heard of the term VO2 max. The short explanation is that VO2 represents the body’s ability to use oxygen. It is measured in units of oxygen used per kilogram of bodyweight per minute (ml O2 per kg per min). Although typically, you’ll just see a simple figure attached to it without any identifying abbreviations after.

For instance, I’m a 57. You’ll see from the table below that for my age a 57 is pretty good. However, when you’ve got a friend who is a 71, it goes a long way toward explaining why you can’t keep up with him.

Table adapted from Wilmore and Costill.1

To put these numbers in perspective check out the following table that estimates best running times based on VO2 scores: 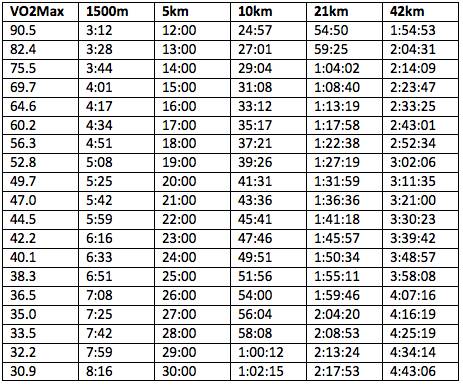 Table modified from Daniels and Gilbert.2

My Score Sucks. Now What?

But it’s not all bad news if you have a low score. There are a few things you can do to get better:

First, run more. Or ride or swim, or row. Whatever your sport is, do it more. As you become better at it via repetition, you will become more economical and that will allow you to run, ride, or swim at a faster pace for the same effort.

Second, try losing some weight. I know that goes against everything most people think about in gym terms, especially the guys, but VO2 is a score relative to body weight. Simply dropping a few pounds will improve your ability to work. It will also help your economy. In fact, racing weight is so important that cyclist Tyler Hamilton has been quoted as saying if he had to choose between a three-point gain in his hematocrit from taking EPO versus a three-pound weight loss, he’d take the weight loss every time. It’s that important. There’s no need to become emaciated like many elite distance runners are, but let’s face it, most people could stand to drop a few.

Third, even though VO2 is said to be largely genetic, it can still be influenced by training – by as much 15%. Using me as an example, that would take me from a slightly above average 57 to an incredible 65.5 and potentially drop more than twenty minutes off my marathon.

VO2 sessions are typically done at high intensities and typically only last for a short period of time. My two favorites are 60:60s and 3min:1min x 3.

If you choose to do the 60:60 option, you are going to work for 60 seconds hard and 60 seconds easy recovery. If you’re running, this will be faster than 5km race pace and then recovering at a lower pace. I’ve done as many as twenty of these in a session and it’s not pretty. Make sure to warm up for at least ten minutes with some faster strides if you’re running or do some big gear work if you’re riding to really fire up the body.

The 3:1 x 3 option is even worse. You’re going to work hard for 3 minutes and recover for 1, doing three rounds before a longer rest. A really solid beginner session using this format is as follows:

As you become more advanced, extend out the length of time you work so that you do either 4 or 5 minute efforts, but keep the total rounds the same.

I’ve seen all kinds of recommendations for target heart rate or power if you’re on a bike, but the reality is if you just set a pace for yourself that makes these efforts hard in the final half, then you’ve got it right. I prefer the three-minute efforts as it takes a while for the heart to get to the right point and be working hard enough. I often feel like the 60:60s don’t allow the heart to get high enough.

These workouts are really hard efforts and should be used sparingly – no more than once per week. One of the biggest benefits I found in doing these intervals was that even if VO2 never changed, I got used to running faster, which allowed me to push harder when doing my other runs or rides. But don’t mistake these for sprint work if you’re chasing distance – the intensity is too high for it to have any real carryover to your distance work. This is just hard running, but not all out sprinting.