From the Experts: How to Attract and Retain Women in BJJ

I recently discovered that not much has been written on how to get women into BJJ, so I did some research and talked to women I know who practice the art. Here’s what they had to share on the topic.

A few weeks ago, my editor Becca told me that fellow Breaking Muscle contributor Sally Arsenault wondered if I’d be willing to write a story about how to attract women to BJJ and how to keep them there once they start. I was a bit surprised by the request because I’ve been asked this question many times over the years, so I assumed numerous people had already written about it.

A few weeks ago, my editor Becca told me that fellow Breaking Muscle contributor Sally Arsenault wondered if I’d be willing to write a story about how to attract women to BJJ and how to keep them there once they start. I was a bit surprised by the request because I’ve been asked this question many times over the years, so I assumed numerous people had already written about it.

After doing my own research, however, I discovered that there isn’t nearly as much “out there” as I had assumed. It will not be surprising to those of us who know her that Breaking Muscle favorite Krista Scott-Dixon collaborated with Stephan Kesting to write a useful and enlightening article on this very topic.

Other than that, however, I have not been able to find much. So, with apologies to Becca and Sally, and with thanks to Sally for the request, I decided to contribute to this conversation by providing a synopsis of some data I have (unscientifically) collected on the topic from the people who would know best: female grapplers. I posted the following question on the Women’s Grappling Camp page on Facebook: “What should grappling academies do to attract and retain women?”

And I got a veritable outpouring of heartfelt, thoughtful responses, including some surprises and home truths. For those of you reading, if you take nothing else away from this article, take away the following: If this cross-section of lady grapplers is any indication, women care about BJJ.

We want to train, we want to be good teammates, and we want to bring other people, male and female, into the fold. If you are reading this, chances are you share this goal. So we have some common ground right there. Even if we have different beliefs about the path, many of us want to get to the same destination.

I mention the concept of multiple paths because when I distilled the information the respondents provided, there were definite trends, but there were also exceptions to every trend. In other words, if most respondents commented that X strategy would help attract and retain women, at least one noted that X strategy had little or no bearing on how they found and persisted in BJJ.

So another important takeaway for all of us, as instructors, dedicated students, or even “lifers,” is that we need to make sure not to be blinded by our own preferences or proclivities. If we are unable or unwilling to acknowledge that different people have different needs, we might be missing out on an opportunity to make progress on our shared goal.

What follows is an encapsulation of the feedback I got from these very gracious informants. I am fairly confident I was unable to do them justice, though I did try. While some of these ladies were willing to allow me to use their names, not all of them confirmed they were comfortable with this.

So I won’t identify the provider of any specific information, instead encouraging them to do so and to elaborate, if they so desire, in the comments section. Any quoted material is courtesy of the respondents. If you read any of these observations and think, “Well, duh,” that’s fine, but do take a moment to make sure your academy actually embodies these things. Knowing and doing are two different things.

How to Keep Women

Make space for women. Provide a separate changing room and bathroom for women, “not some closet with cleaning supplies that doubles as our changing room.” And make sure the space is clean and inviting. This was probably the most-mentioned request. 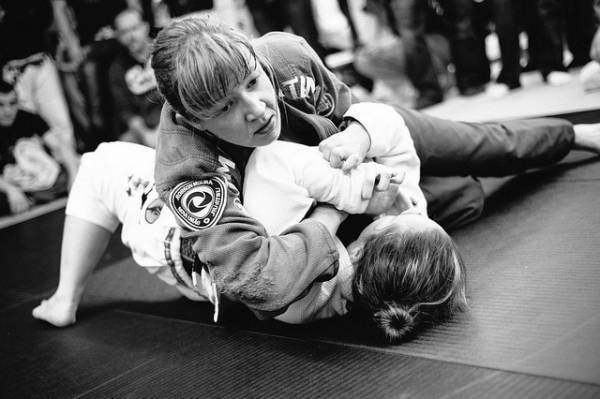 Create a friendly environment. “Retention seems to rely heavily on having some consistent, higher rank training partners around who are welcoming and encouraging. When I started there weren’t too many consistent women but there were friendly guys who had time for girls and that was key. Ultimately, it starts at the top…Good attitude trickles down from owner to instructor to students.”

It is important for both male and female students to be willing to work with new women. Women shouldn’t always have to be the ones to work with the new students, because if they are paying customers they want to get in their own training, but they should curb any tendency “to want to be the only woman in the gym.”

Promote collaborative gender relations. Just as a friendly environment starts at the top, so too does an equal opportunity environment. Don’t make or allow jokes along the lines of “You’re going to take that from a girl?”

It may seem harmless, but it can breed resentment or skewed expectations, where men feel belittled and like they must “beat” women at all costs. Some respondents suggested keeping the focus on the differences between men and women to a minimum as much as possible in a co-ed class.

If possible, offer women’s-only classes and have women teach them. Many of the women stressed this as an important draw, particularly the idea of having friendly upper belt women around as role models, though a vocal minority indicated that having female training partners isn’t as important to them, particularly if they weigh 100 pounds and are always paired with the only other woman, who happens to weigh 170.

What seems to be important overall is making sure women don’t feel like they are the odd person out or always last to be picked. This is something both the instructor and the current students can help with.

How to Attract Women

I also asked the women how they got into grappling themselves, as we can only attempt to retain women who show up in the first place. Here’s what they said:

They found BJJ through other martial arts. “I feel like many women have a ‘gateway’ martial art, like tae kwon do or muay Thai before starting jiu jitsu. I’m not sure if this is because women that like punching and kicking things are more likely to like jiu jitsu, or if it’s just a great way to introduce such a sport.” Others noted that women who are drawn to BJJ are likely to be athletic themselves, having enjoyed and excelled at team or other individual sports in the past. 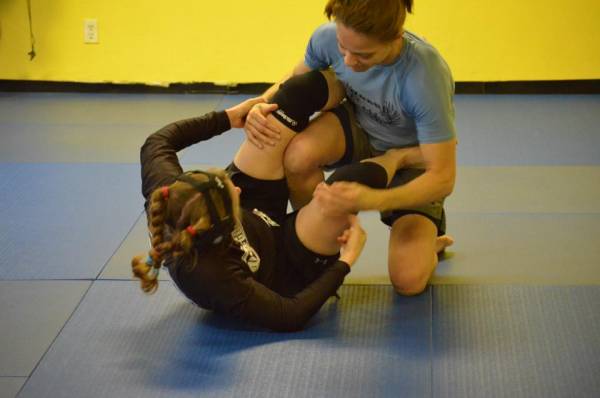 Their significant other brought them. “My boyfriend dragged me, and now I’m probably more into it than he is (Bahahahah).” Another respondent’s husband came home from his first day of training and told her she’d never train because of her personal space preferences, which she viewed as an opportunity to challenge herself (“The rest is sweaty, sweaty history.”).

The point is, women who are in relationships with people who currently grapple might be likely candidates for conscription to the cause, first because they may have a sense of what it entails due to said significant others trying moves on them, and second because it might give them the opportunity to spend more time with said significant others.

They wanted to get fit. There’s no denying that the physical requirements of grappling are intense for the novice. One respondent observed she “just wanted a great workout…Now it’s what I go to bed and wake up thinking about.” Others said similar things, that they were challenged physically during training and eventually became hooked because it challenged them mentally and psychologically as well.

Obviously, those of us who train can’t force others to love it as much as we do. Further, it is also very important to strike a balance between accommodating needs and setting realistic expectations about the realities of BJJ. As one respondent noted, “I am honest with new ladies, though; there are tons of moments where sweaty feet, groins, pits, and chests are in your face.” (And that’s just the locker room.)

But as someone who believes good intentions get a bad rap as the devil’s linoleum, engaging in conversations like this one can help all of us learn more about how to make BJJ available to many more people, including, arguably, some of the people who could benefit from it the most.

Ladies who contributed, what did I gloss over or need to cover more completely? Other readers, what are your thoughts? Post to comments.