Great Expectations: The Truth about Gender Stereotypes in Grappling

Many of the stereotypes in the grappling world about one or the other gender are often not necessarily accurate, in that the behaviors can be widely characteristic of both sexes.

News flash: Men and women are different. (Also, water is wet.) But it can be inaccurate, not to mention detrimental to gender relations, to take stereotypes about gender differences at face value. (Did I mention that thing about water?) And nowhere is this truer than in the grappling world, where men are still in the majority but women are making significant inroads.

Arguably, we are experiencing a moment in grappling history where expectations are changing and appropriate mores for future behavior are still being hammered out. In the years I’ve been training, I have seen a few things. (Imagine that sentence was spoken in a “Mickey the trainer in the Rocky movies – until he died – voice.”) One of the things I’ve learned is that many stereotypes that persist in the grappling world about one or the other gender are often not necessarily accurate, in that the behaviors are not limited to that specific gender, but rather can be widely characteristic of both. That is, this is the case if my unscientific but extensive data collection is any indication.

Here are just a few examples from my “studies,” for your consideration:

First, as often as not, “Gossip Girl’s” real name is Mike. Many years ago I was training at an academy where I had some seniority, in that I had been training there a while and had had my purple belt for a couple of years. I taught periodically, filling in when the regular teachers were detained in some way, and I suppose I was pretty well known for those reasons, as well as for the obvious fact that I was one of just a few women who trained regularly. I mention this by way of context for what I’m about to share (cue ominous music).

One time after class, I was chatting with a male teammate I knew pretty well, and I mentioned in passing that I was going on vacation the following week. For the record, this teammate was the only person I mentioned it to, not because I was being secretive, but because it didn’t come up otherwise. A couple days later, a student (white belt, though it could have been anyone) I had never seen before let alone talked to came up to me and said, “Hey, Val, are you excited about your vacation?”

I was as surprised as I would have been if a complete stranger had come up to me on the street and asked the same question, because that’s basically what was happening. And since I’m a terrible actor, I kind of sputtered and um-ed and finally blurted out, “How did you know I was going on vacation? Did I tell you? I’m sorry, I don’t even think I know you.” My complete brain fart clued the guy into the fact that the situation was a little awkward, and then it was his turn to sputter and um. I was able to piece together that he had heard the information fifth- or sixth-hand, which means four or five other guys had mentioned my vacation plans to each other, in a manner I imagined to be kind of like a verbal bucket brigade. 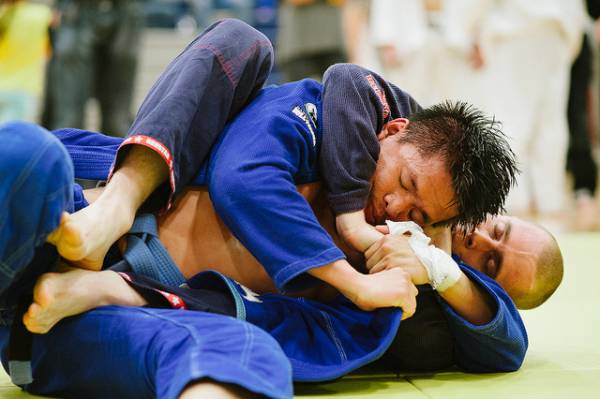 I wasn’t angry about it. I was just a bit confused. But it was a first-hand example of a phenomenon I have witnessed numerous times since. Despite the fact that women are usually painted with this brush, some grappling guys are the biggest chatty Cathies on the planet. Women are not the only ones who want to be in the know, and in the grappling world, sometimes their desire for the scoop pales in comparison to that of their more testosterone-laden counterparts.

Second, the spazzy white belt might actually like to indulge in the occasional girls’ night out or rock a kicky kitten heel off the mat. The stereotype of the big, oafy, inexperienced dude who is a menace to train with because he doesn’t know his own strength is only part of the picture. In my experience, the capacity to roll in a tense, aggro, and potentially dangerous manner is by no means limited to men. My theory is that while men may underestimate their strength, women may do the same thing, or at least underestimate our ability to cause harm.

Think about it: A 170-lb man who is training with a woman 50lbs lighter still has to contend with 120lbs of flailing fury coming full-tilt in his direction, if the woman goes ovaries-to-the-wall. Thus, it is possible that a man faced with this kind of energy might up his own intensity. He might do this first in the interest of self-preservation and second because he (mistakenly but understandably) thinks the woman is signaling by her actions that she can handle it – and that she is actually seeking that kind of intensity in response to hers.

Third, women aren’t the only ones who wear their hearts on their rash guard sleeves. Women sometimes get a bad rap for crying and otherwise being disruptively emotional on the mat, but they have not cornered the market on letting it all hang out feelings-wise. I wrote a story recently about how I was able to tame a savage male white belt with a handy reminder that when he is bested in BJJ, “it’s the art” that is besting him. The relevant point for this story is that the white belt who needed his savagery tamed and his tendency to wreck himself checked was male. Perhaps this was an extreme example, but the fact remains that BJJ is a highly emotionally-charged activity for all of us who care deeply about it, regardless of what’s under our respective bathing suits. And this means all of us are vulnerable to outbursts of frustration, anger, or even elation. Further, if my observations are any indication, women are no worse at controlling these emotions in the heat of the moment than men. The outbursts just may assume a slightly different form. 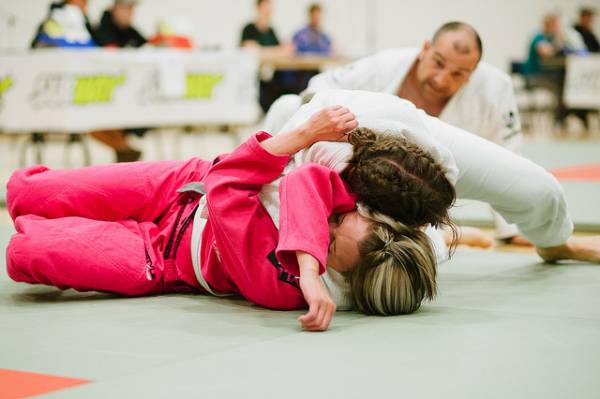 Fourth, sometimes it’s not just men who balk at having women in class. As a new student, I remember feeling like I was just patiently and sometimes impatiently tolerated in class. All the upper belts would endure their time drilling or rolling with me and then hurriedly find someone more experienced to pair up with. Since most of the students, particularly the more seasoned ones, were men, I mistakenly concluded that men in general didn’t want me there.

But although I have been told several times over the years by various grappling men for various reasons that women have no place on the mat, I have also discovered over the years that most men do want me, and women in general, in jiu jitsu. Notably, I have also discovered that at least some women don’t, and that for a time, I was one of those women who didn’t want other women around. I don’t think I’m in denial when I say that nowadays I’m genuinely happy so many women are finding BJJ, but I also have observed over the years that I’m not the only woman who has ever felt or acted in a way that makes other women feel less than welcome.

Why am I pointing out and attempting to subvert these gender stereotypes? Well, I’m not trying to single out anyone. But I am trying to encourage all of us to think a bit more deeply rather than jumping to knee-jerk conclusions, both about others and about ourselves. As I mentioned above, we have a lot of work to do in terms of gender relations in BJJ. And the most effective place to start is by looking at the behaviors we can control – our own.

What have your experiences been with gender stereotypes related to grappling, or in general? What can you do to look past those stereotypes to the people on the receiving end, to give them the same consideration you’d want for yourself? Post thoughts to comments.