If you want strong lats and phenomenal core strength, then the front lever is an exercise for you. More than likely, if you can do a front lever you’ll have a great six-pack. This isn’t just because you’ll have strong abs, but the less bodyweight you have the easier this will be.

Why the Front Lever Is So Difficult

I don’t think I’ve ever seen an overweight person pull off this move! (Though it’s certainly not an impossibility.) But it’s not just how much you weigh, but how tall you are that plays into the difficulty of this movement. As a leverage exercise, one additional inch in height adds many foot-pounds of pressure that you must resist. Personally, at 6’2” and 185lbs, I’m not the standard gymnast size. But that’s no excuse for not being able to achieve this move if you’re willing to put in the work.

The front lever is somewhere around two to three times more difficult than the back lever, at least in my experience. It’s not just about holding your body out parallel to the ground, but also about using your lats to lock yourself into place. In the front lever the lats are at a much more disadvantageous position than in the back lever, making it significantly harder.

I’ve even heard it said that the front lever is tougher than the one arm chin-up, but I think this will depend on the person and their focus. In either case, there will be some carryover between the two.

Six Steps to the Front Lever

In this article, I’ll give you six steps you can use to work up to the full front lever. You may notice these are different than what I advise for the back lever. In my own training, I discovered that this set of progressions worked better for me for the front lever. For example, I found that when I tried to do straddle front levers, there was a likelihood of a pike in the hips, which you want to avoid, but this is easy to avoid with the one-leg versions. That doesn’t mean you can’t do alternate progressions if you want, but this is what has worked for me and for many people I have observed.

Tip: One thing that helps on this exercise, regardless of the step you’re on, is to not only pull down on the bar, but to also pull apart your hands. This action can help stabilize the scapula allowing you to hold the position better.

Grasp the bar within overhand grip. Pull your legs and hips up, at the same time leaning back. Your back should be rounded and your body tucked up into as much of a ball as possible. Although rounded, you want your back approximately parallel to the ground.

Start in the tuck lever position. Instead of rounding your back, now you’re going to straighten it. It should form a line approximately parallel to the ground. At the same time, pull your shoulder blades back in retraction. Open the legs up slightly so your thighs are perpendicular to your body. This opening up increases the leverage. 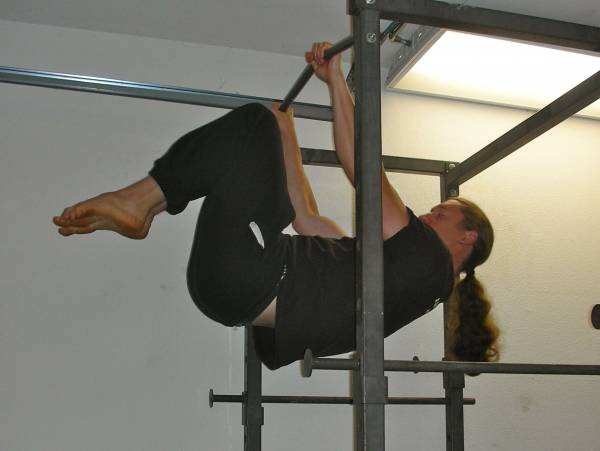 From the tuck lever, start with both your legs tucked in hard. Now extend one leg out, but keep the knee bent. The lower leg will be perpendicular to the ground, but your hip will be opened up completely. It may look like an odd position, but it’s not difficult to get into, and is an important step in the progression. Make sure to alternate legs between your sets. 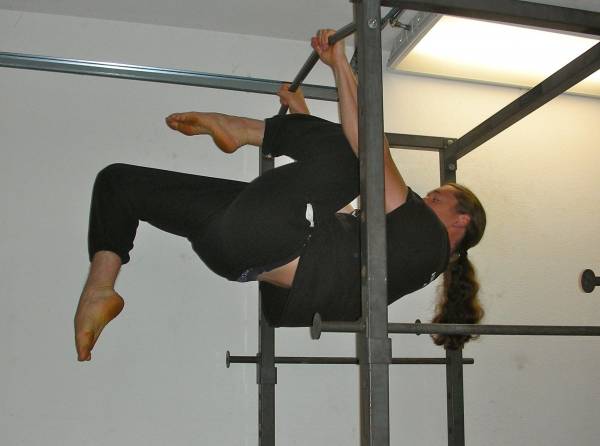 Start in the tucked front lever position. Extend one leg out completely straight. Your back, hips, and the extended leg will all be in one line, parallel to the ground. It’s okay if there is a slight bow, but you should be mostly straight. The other leg will be tucked in hard to the chest. Make sure to alternate legs on your sets. 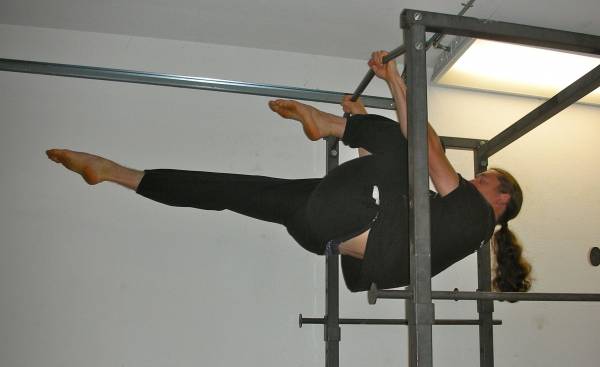 Start in the tucked front lever position. Extend one leg out completely straight. The other leg is partially un-tucked. The foot will be in line with the knee of the other leg. This halfway open position increases the leverage dramatically. Once again, your back and the straight leg are parallel to the ground. Alternate legs. 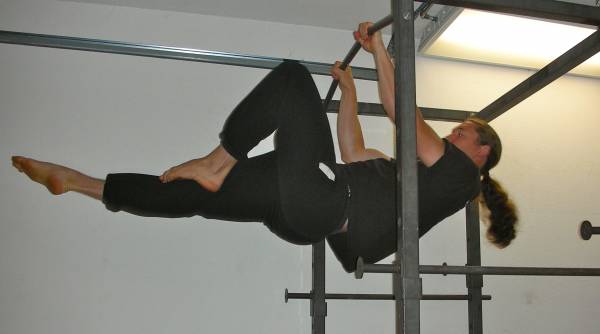 Starting from the tuck lever position, keeping both legs together, gradually extend them out at the hips and knees, until they are completely straight. Your entire body will form one straight line parallel to the ground. Pull down hard with the hands and the lats, as well as working the pulling-apart action to assist in stabilization.

Tip: Alternatively, you can pull up into this position from standing, although this is harder to do. These front lever pulls can be a great dynamic exercise, even without holding, to do in addition to the regular progressions of holds. 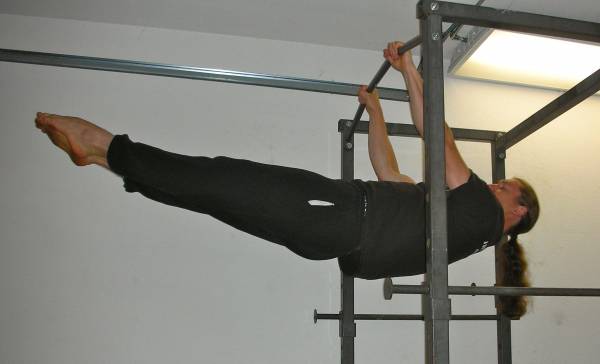 In the interest of being forthright, at the time of this writing I haven’t achieved the full front lever hold yet. Not for more than a split second anyway. But I am close, having accomplished several seconds in the advanced one leg front lever. And these are the progressions I’ve used to get there.

In the beginning you may progress quickly through this series as your body becomes adapted to the front lever position. As you reach the last three steps, you’ll find things slow down. Understand that it can take months to go from one step to the next. An additional second here and there is great progress. And, as needed, you can do additional in between phases of these exercises. 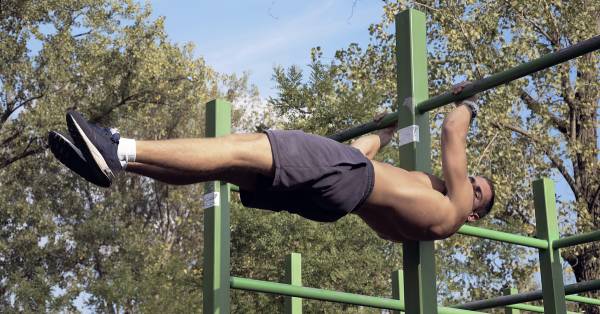