I first got interested in triathlon way back when I was finishing high school. That year, Dave Scott and Mark Allen raced in the infamous Iron War race. They battled shoulder-to-shoulder for nearly the entire 140.3 miles of the course. Allen finally broke away near the line to win and break his losing streak at the big island.

Not long after that, an Aussie named Greg Welch broke through in Kona to win, and that put triathlon on the map in a big way in Australia. Suddenly we had some of the best talent and racing in the world right on our doorstep, with multiple world champions like Emma Carney, Jackie Fairweather, Michellie Jones, Greg Welch, Brad Bevan, Miles Stewart, and Chris McCormack.

“Like many, I had all kinds of delusions about what was and wasn’t needed for triathlons and kept second-guessing myself every time I signed up to do a race.”

Triathlon became so popular that our domestic race series was telecast live on commercial television like other major sports events. (And it’s way more exciting than cricket, by the way.)

But despite following the sport, it took me years to jump in and do a triathlon myself. Like many, I had all kinds of delusions about what was and wasn’t needed for triathlons and kept second-guessing myself every time I signed up to do a race. I had all the usual excuses – work getting in the way, not having anyone to train with, and not being able to afford it.

So here’s my advice for the best way to get started in triathlon, or any new hobby for that matter.

Because I start work at 6:00am when most squads train, I am forced to do the vast majority of my training solo. That’s not a bad thing, as I actually enjoy the time spent on my own, but there are days when even I don’t want to train. Having others there to talk you into the work will help you enormously.

For example, last weekend I was standing at the start line of a half-Ironman and it was just miserable. Cold, rainy, windy, and generally shitty, with a forecast for huge winds on the bike course. If I had gone to that race on my own, I wouldn’t have even started. But because I went with my girlfriend, who was determined to finish, I felt obliged. On top of that, I ran into friends who were also 100% focused on finishing no matter what. So I started – and once I was swimming everything wasn’t so bad.

“[I] actually enjoy the time spent on my own, but there are days when even I don’t want to train. Having others there to talk you into the work will help you enormously.

That kind of peer pressure is a good thing when it comes to the hard times in training. There are days I’ve been so exhausted before even riding that I’ve literally prayed to God (and I’m an atheist) that I would get hit by a car so I didn’t have to train. The fatigue can be that bad. But when you have training buddies to lean on during these times, it makes it so much easier.

The other aspect to joining a club is that they’ll usually be able to get you discounts for gear (more on that later) and there will be people with experience for you to learn from.

You Don’t Need All That Gear

Even though you see professionals using bikes that cost as much as most people’s cars, you don’t need one of those bikes. The same goes for an aerodynamic helmet. For proof, go watch Chrissie Wellington win in Kona multiple times with a standard helmet on a Cervelo P2, which is a far cry from their top-of-the-line P3 (at the time) and current P5.

RELATED: How to Save Money on Endurance Events, Gear, and Coaching

I’ve seen people at local events riding mountain bikes with the knobby dirt tires. The reality is that a local sprint triathlon is only a 20km ride, and if you’re just seeing if you will enjoy the sport or not, you just need a bike, any bike, and you’ll be fine.

The gear you really do need makes for quite a small list:

You don’t need a tri suit or a two-piece combination with shorts and a top, but you will be substantially more comfortable in them than any other gear you may want to wear. Ignore the idea of wearing a cycling top because it is also Lycra. These jerseys normally have three large pockets on the back, which will act as a parachute while you’re swimming.

The same goes for most brands of compression wear. Most have a seam that runs directly through your crotch. Without wishing to be indelicate, if you’re unused to sitting on a bike seat for a period of time, you will likely already feel like you’re going to rub a hole in yourself. Don’t make that worse by adding a seam to cut you in half, too. Trust me on this.

“If you’re a beginner triathlete, I will guess the swim isn’t your best leg. The extra buoyancy offered by a wetsuit is well worth the small investment to rent.”

The one exception regarding equipment is a wetsuit. Many companies and shops offer rental deals now and I highly recommend you do this. If you’re a beginner triathlete, I will guess the swim isn’t your best leg. The extra buoyancy offered by a wetsuit is well worth the small investment to rent. Do not try to use a surfing or water-skiing wetsuit as an alternative. They’re a different kind of rubber, are designed differently, and will actually make swimming harder, not easier.

Most wetsuits have multiple sizes that are all close to each other. Using 2XU as an example, I can fit into three different sizes, and also a fourth that fits me perfectly. Take the time to get your size right and make sure the person helping you understands the suits and how to make them fit correctly.

RELATED: From Pool to Ocean: An Account of My Brief Open Water Swim Career

When put on properly, a wetsuit won’t have any restriction in the shoulders or rubbing around your neck where the zipper closes. A poor-fitting suit will leave you fatigued and chafed, so don’t be shy about making sure this is absolutely correct – especially if you decide to buy, as they are a big investment.

For nearly everyone who starts triathlon, and even for regular competitors, the swim is the discipline that holds the most fear. It’s easy to understand why, especially in Australia. The swims are open-water swims where you can’t see the bottom and the water can be quite cloudy. Down under, that means people worry about sharks. 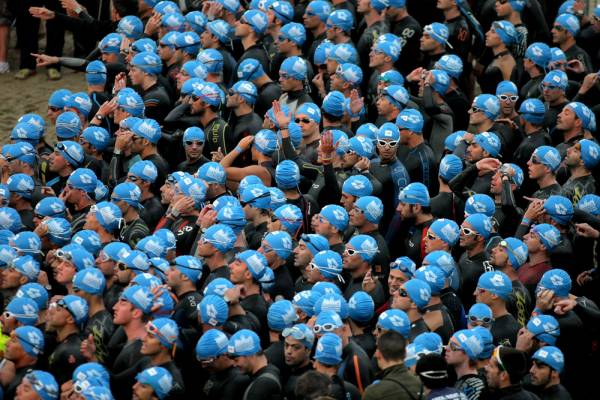 This fear is compounded during wave starts where you have a hundred or more people starting together in a small space. (An Ironman swim will have 1,800-2,000 people all starting together and it’s like being in a wet mosh pit.) This leads to jostling, occasional punches and kicks to the head, and then a panic that starts to set in. Adding fear of deadly creatures surfacing from the dark depths to eat you and the swim can really set people on edge.

“It’s very different having to lift your head to sight, having to deal with waves and other people, and not being able to see the bottom”

If you’re not a confident swimmer, then the experience can be confronting even for short distances like those in sprint triathlons. So spend some time in the water prior to your race, and in open water, if you can. It’s very different having to lift your head to sight, having to deal with waves and other people, and not being able to see the bottom. I’d even suggest a few lessons from a reputable swim coach just so you develop some confidence and learn to relax when things get bumpy.

This is another great part about being in a training group, as you’ll be able to join in on swim squads. These groups often work on these exact elements so that you’re relaxed swimming in close proximity to others on race day.

Triathlon is one of the most open sports I’ve seen. From absolute beginner to top professional, everyone races on the same course and all are welcome.

The distances for sprint triathlons are only an 800m swim, 20km ride, and 5km run. For most people, that will take between an hour to an hour and a half. If you can survive a Spin class and a short run after, then you’re fit enough to do a sprint triathlon.