if you’ve ever watched a team rally and come back from a huge deficit, then you’ve seen people in group flow.

Ever wonder why group workouts are so successful and popular? Training for marathons, triathlons, CrossFit, and many other physical activities and sports often have a huge group-training component.

At first, it seems obvious. Humans are social creatures. It’s just more fun to workout with friends. But, even if you’re a loner there may be an actual physical benefit to working out in a group. That benefit is called group flow.

A State of Optimal Consciousness

Flow is basically a state of optimal consciousness that allows you to focus on the task at hand and perform at your best. Steve Kotler, author of The Rise of Superman, a book focusing on how being in a flow state leads to peak human performance, defines flow as when “…every decision, every action le[ads] perfectly, seamlessly, fluidly to the next.”

Flow can be achieved by yourself, but it also occurs and becomes even more powerful when it happens in a group. It’s the classic notion that the whole is greater than the sum of its parts. A team or a group is more powerful and flows more powerfully than an individual athlete.

Spontaneity, cooperation, communication, creativity, productivity, and overall performance skyrocket in a group flow. People perform as a unit, anticipating the actions of others before they happen. Think hive mind, but without the weird beehive mental images that pop-up (or maybe that’s just me).

I know that sounds a little ridiculous and maybe even a bit unrealistic. But, if you’ve ever watched a football team rally and come back from a huge deficit, watched a band absolutely kill a performance on stage, or even watched a CrossFit team competition or group-training session, then you’ve seen people in group flow.

These kinds of experiences carry over to the people observing, as well. The overwhelming emotion that comes from witnessing group flow moments is what gives us chill bumps or makes us respond in an emotional way. It’s a thing of beauty and something that moves us, even if we don’t understand it.

What’s Actually Going on That Makes Us Perform Better?

As weird and woo-woo as the idea of group flow might seem, there are actual physiological things that change when we’re in a flow state. Namely, a bunch of neurotransmitters are released.

This enhances our ability to analyze and recognize patterns. It helps us problem solve faster and more efficiently. It also allows us to recognize things we might never notice otherwise. Plus, dopamine feels amazing! Cocaine, one of the most addictive substances in the world, stimulates dopamine release and blocks its reuptake. Dopamine drives humans to take risks and do new things, while also increasing heart rate, blood pressure, and muscular contraction speed and force. Therefore, it makes us braver and more physically capable. 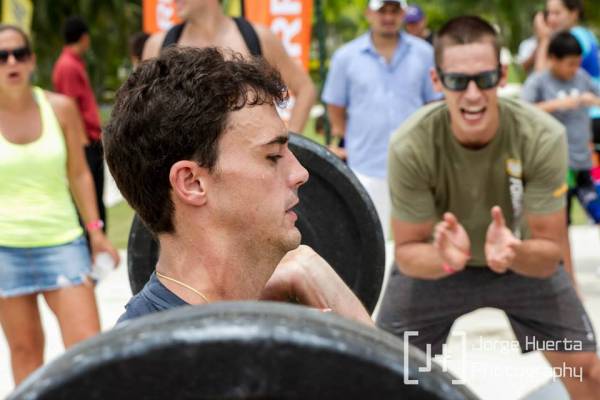 This one increases heart rate, blood pressure, muscular tone, and respiratory rate. It also releases glucose to provide for readily available energy and increases arousal, attention, neural efficiency, and emotional control, thereby increasing our ability to ignore distractions. Ever wonder why you can’t hear the music or see anything but the bar when you’re wrapped up in the middle of a hard workout? That’s norepinephrine doing its thing.

These act as a natural opiate to relieve pain and increase pleasure at one hundred times that of morphine. That explains why you can work out, scrape half the skin off your shins, and not feel it until someone points out that you’re bleeding a few minutes after the workout.

This one acts like marijuana, in that it is a cannabinoid. It elevates mood, relieves pain, increases lateral thinking (our ability to link ideas together), and makes us fearless. So, scared of handstand walking? Do it halfway into a group workout.

Released near the end of a group flow state, seratonin is a happy hormone. It’s responsible for the fantastic feeling of calm and happiness at the end of a strenuous activity or flow session.

How Do You Make Group Flow Happen?

Wow! That sounds like a lot of fun things happening all at once. Let’s go do some group flowing, right? But, how do you make group flow happen? According to Keith Sawyer, an expert on the topic of group flow and author of Group Genius: The Creative Power of Collaboration, a few things need to come together at the same time to encourage group flow.

The group’s goal needs to be concrete enough so the group can tell when they are making progress, but the goal should also leave enough room for some problem solving to occur. In a fitness scenario, the goal is usually to finish the workout or in some cases the workout might be a part of a larger plan, like training for a marathon or competing at a CrossFit competition.

If you want to foster flow in your classes or training sessions, there needs to be a concrete and measurable goal. A class done “just for fun” probably isn’t going to foster flow as well. There also needs to be room for people to figure out the best way to meet the goal. If you’re too strict about how things “should” be done and limit group members’ abilities to try a different way, then you’re effing up the flow, dude. 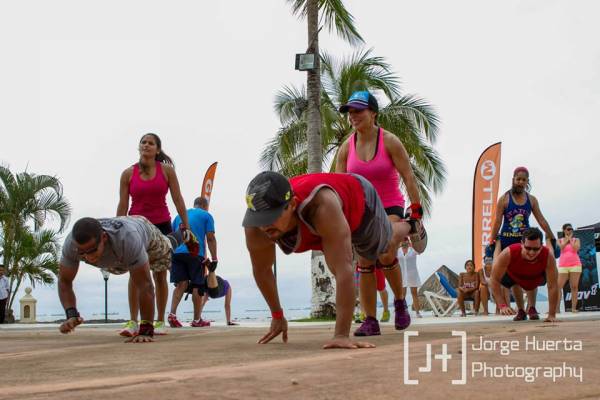 Members of the group need to be attentive and fully engaged, what some refer to as “deep listening.” Members should also avoid forming an idea about how something will or should go before they listen or engage with their peers. Responses to situations should be genuinely unplanned.

You can’t have a group full of people who aren’t willing to pay attention, yet thinking they will learn a new skill or work together. I’m probably guilty of this more often than I want to admit. “Stubborn” should have been my middle name and, if you ask my husband, sometimes it is.

After engaging in deep listening, team members then need to accept the new information, adjust, and keep moving forward. Nothing gets group flow off track like someone who refuses to adapt. (See Miss Stubborn above.)

Seriously, don’t be or let someone be the stick in the mud that refuses to take on a new way of doing things. Don’t be the one who, in the middle of a competition, refuses to change strategies simply because it isn’t how you think things should go. Don’t be a diva.

In order to achieve group flow, a group must maintain complete concentration on the task at hand. You can’t be distracted or you’re not group flowing. You can probably recall an example of distraction happening during a group lifting session. It could be there’s way too much socializing going on or people are goofing off on Facebook or email in between lifts.

If you’re having trouble getting your training group into flow or just working well together, make them turn their phones off, pull the groups further apart, or get them somehow separated from whatever the distraction is so they can concentrate on the task at hand.

Individuals in flow are in control of their actions and environments. But group flow requires that people be flexible and alter their own actions to suit the overall flow of the group. The key to achieving group flow is to allow each individual the autonomy to feel like he or she is in control, but then also make all group members feel related and have them value their roles so they will voluntarily make adjustments.

To do this, I would encourage and acknowledge each athlete’s strengths and then utilize it so each athlete feels valued. But I would also appreciate team members for what they add to the group. If people are competing as a team, have them practice together as often as possible. This allows them to become confident in their roles on the team and to become more comfortable working with each other. 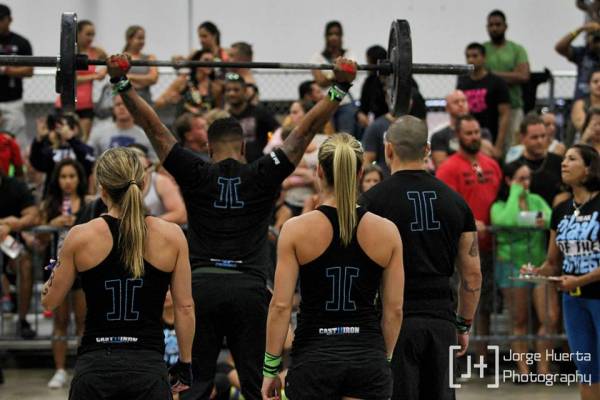 Members of a group have to be able to tame their egos and allow each member to contribute. Each member likely has a unique quality, idea, or talent and it’s important these qualities be brought together so the group shines, not just one particular member.

Group flow depends on members of the group participating equally in the final outcome. Skill and ability levels should be similar so that members are truly peers and can work together. If you pair beginners with advanced athletes, know the workout may be a challenge without good scaling.

Also, dominant, arrogant, and know-it-all types can really ruin group flow dynamics. Identify these types of athletes early, then correct the behavior or let them participate as an individual. (That was my nice way of saying “kick them out of the group.”)

The more team members know each other and work together, the more productive and successful they are. This is due to something referred to as tacit knowledge, which is an unspoken understanding that allows the group to make decisions and react quickly to one another’s actions. Again, practice and train together often.

Good communication doesn’t mean stuffy, formal meetings. The most beneficial communication occurs in informal conversations like the ones that happen before, during, or after a training session or group workout. So, here’s your excuse to socialize together. (And you thought all those gym socials where just an excuse to drink.) 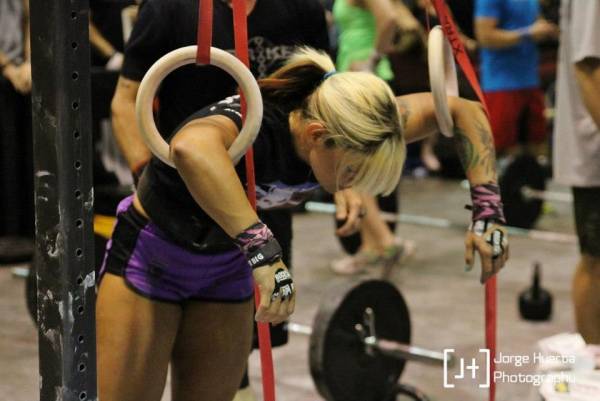 The risk of failing (and occasionally actually failing) is important to group flow. Without that pressure, creativity and motivation will be absent. There needs to be some sort of testing ground in the group activity being engaging in. That’s why training for a sport or competition is perfect for enhancing group flow.

If your group doesn’t have a test to prepare for, then find one. My husband and I opened a gym in March, and while some of our members compete, many do not. So, we have them test their fitness by either repeating workouts periodically or retesting lifts and run times.

The Idea Is Simple

Wow! That’s a lot of information, right? But, the overall idea of group flow is simple. Foster a good environment using the components listed above with the right kind of personalities and you can enhance productivity, boost performance, and meet goals that you or your group may never have been able to achieve on your own.