Lumbar spine rehab is about movement pattern correction and re-education. Sumo deadlifts are one way to achieve those results.

If you have read my article on deadlifting, then you will understand the non-negotiable parameters of the lift. A quick scan of Facebook and YouTube proves my point, with many “coaches” posting proud videos of clients’, and their own, dangerous form with the grin of a drooling moron fixed to their faces. The Bliss of the Boneheads.

Case Study: A Story of Deadlifting Out of Injury

MRI films from my patient after a lumbar disc injury.

Consider the patient whose MRI films accompany this article. An experienced powerlifter who suffered a significant lumbar disc injury when deadlifting. It was January 2015 when it happened, and here is his MRI above. His symptoms included lumbar, glute, and leg pain; numbness; and loss of calf strength (he was unable to do a single leg calf raise.)

Now consider film number two. Taken twelve weeks later – one week after he competed at the Australian National Powerlifting Championships at just over 80kg bodyweight where he achieved personal records in both deadlift and squat, both over 260kg. That disc injury impact is about 90% healed here. 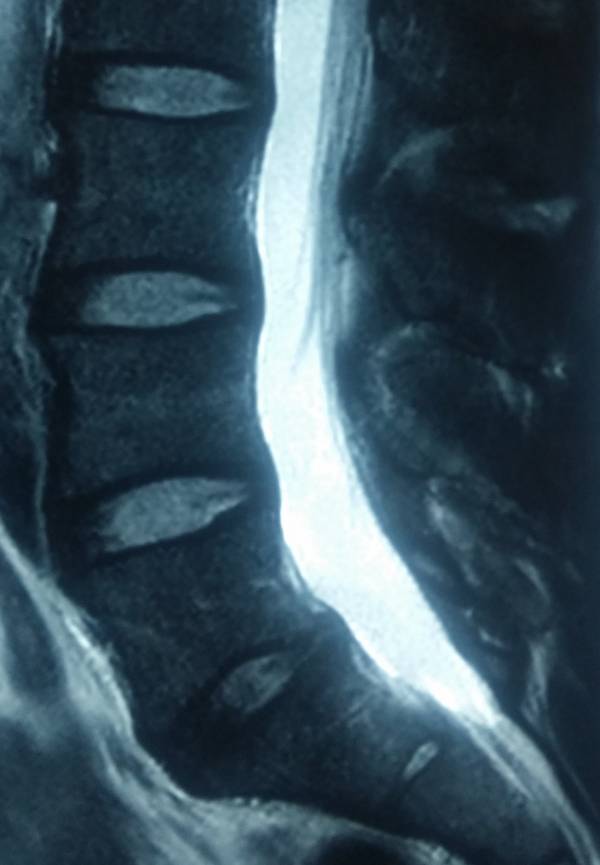 This patient deadlifted from the second week of treatment and began squatting at the third week. What changed was that he was a conventional deadlifter when he got injured and I converted him to sumo for his rehab. He switched back to conventional two weeks before the Nationals and competed with that stance.

There has been a clear demonstration that lumbar disc injury is often associated with decreased multifidus muscle at the symptomatic level and often unilateral to the injured side. As you will know from my previous article that multifidus and transverse abdominis are not a force couple as erroneously described in the article Muscle Control-Pain Control: What Exercises Would You Prescribe? Unfortunately, this article influenced a generation of health professionals.

“It has been well established and discussed by Professor Stuart McGill that, in summary, inefficient movement patterns in lumbar injury are those that are lumbar dominant rather than hip dominant.”

Naturally, what we are talking about here are movement patterns. Lumbar spine rehab, beyond the evident biology, is about movement pattern correction and re-education. It has been well established and discussed by Professor Stuart McGill that, in summary, inefficient movement patterns in lumbar injury are those that are lumbar dominant rather than hip dominant.

So, my rationale for deadlift introduction is twofold:

Remember that the most important muscles for the control of lumbar lordosis are the iliocostalis and longissimus. Movement patterns that acknowledge their contribution should be introduced. Hence, the sumo deadlift.

(Note: Remember I get approximately 1,500 words for the article. As such, it is a nuts-and-bolts affair, with only major points being covered. If you have questions, ask them in the comments below and I’ll add them to my list of potential future articles.) 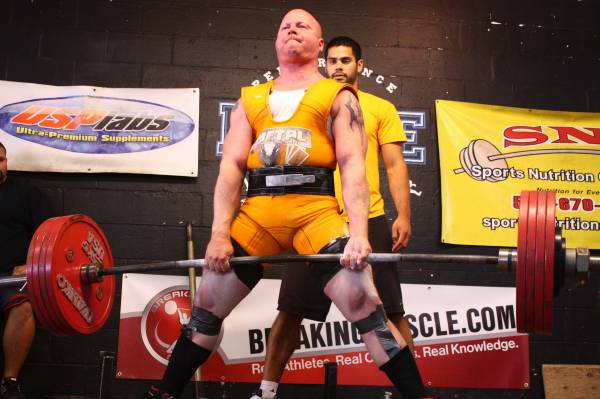 Do You Know How to Sumo?

The obvious reason for choosing the sumo stance is the glute and leg dominance and reduction in lumbar torque load. Here we can load the person using the glutes and lower limbs, teach a hip-dominant pattern, and keep the “core” braced and the spine in a neutral position using the spinal musculature.

“Lumbar spine rehab, beyond the evident biology, is about movement pattern correction and re-education.”

In my assessments, I initially look at the movement patterns in flexion, extension, and bodyweight squatting. These three movements are the base assessment. There is an algorithm I use from there, depending upon the results from both the subjective history and these movement evaluations. It would take an entire article about the implications of each analysis to get an understanding of what I look for and why. That is not what this article is about. This is about using a sumo technique. It is just based from those movements that I make corrective choices.

I’m looking to optimize an individual’s hip movement. Now, here is a huge point to grasp: a person’s maximum useful hip range may, and probably will not, be what you will use. You have to gain that functional range over time. You aim for it, but you will need to start the sumo using the best range the person can achieve when loading. It will be less than their optimal passive range initially. 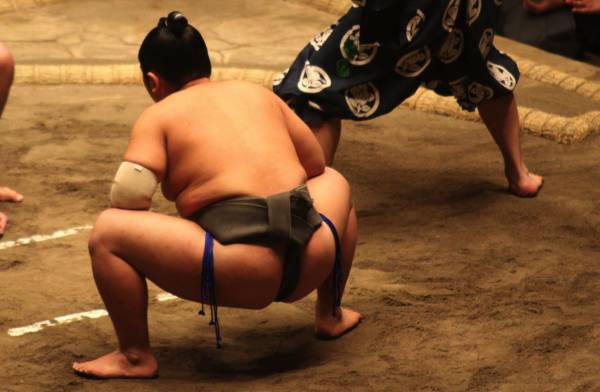 Note the position of the knee and the alignment of the spine.

Basic physics also have to be observed. Your tibia must be vertical when viewed from any angle. It’s not negotiable in rehab work. There are many ways to learn how to get to the best position. A simple one is to use a drill I call Becoming the Sumo. 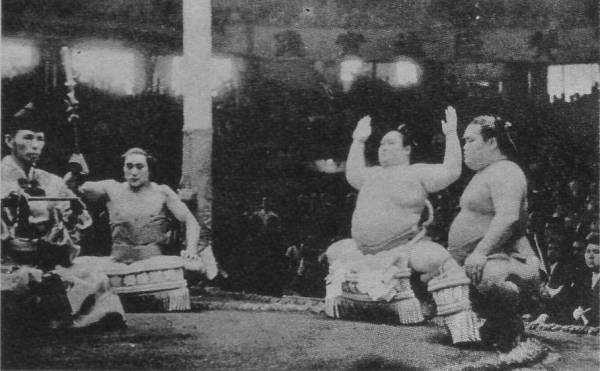 You now have to hold that position for thirty seconds. Every five seconds consciously reactivate your glutes to pull the knees back out. You will almost universally find the knees start to fall in within three seconds. So it becomes a 6 x 5 second glute activations in this position. Watch your vastus medialis activate here, as well (for the attentive people: yes, I have just given you an insight into some of my knee rehab work – glute and vastus medialis combination drills).

This is now the homework to be done a couple of times a day and also pre-training – as an activation drill. I’ve watched the eminent Dan Green performing repetitions where upon lowering the bar he lets his knees fall in, then he actively drives them out to initiate the next lift. What awesome technique he has created. (Hi Dan, and yes, that was my 275lb elbow that was into your glutes at the World’s in Sydney.)

The challenge is that so many people are glute weak that they have problems using gluteus medius to abduct the thigh. Remember the principle of reciprocal inhibition. Most people complain of tight hips (and usually they point to everything but the true hip area), but to release the tightness from the hip adductors/groin, you must address the weakness of the hip abductors. This will give you a starting point. Get the glutes to hold that position of the sumo.

“The optimal position will eventually be vertical tibia and low hips allowing for a very upright spine. Just like our sumo wrestlers.”

Now, to correct the common problem of the knees being too far forward in the side view. If the knees are not vertical, you have to push the hips higher to bring the knees back, assuming you do not have the hip mobility to get wider. Sure, we eventually want to be lower, but you have to prioritize. The vertical tibia is not negotiable, the hip height is. I am essentially referring to lifters who are not established with sumo lifting here. The optimal position will eventually be vertical tibia and low hips allowing for a very upright spine. Just like our sumo wrestlers.

Set Up and Variations

I favor a double overhand grip in rehab. Simply because this is rehab time, we are working on movement patterning, not setting records. Similarly, for those who really have abysmal mobility, I’m happy to set up in sumo stance to lift from a rack or box. There is a need to appreciate each case individually, and as such you may have to accommodate to anatomical and mobility problems. Use your judgement.

A favored early variation I use is a face-the-wall sumo kettlebell deadlift (FTWSKD). Similar to the face-the-wall squat corrective exercise, FTWSKD is a self-correcting movement.

The result is usually an excellent neutral spine position that optimizes the hip movement and loads the glutes brilliantly. 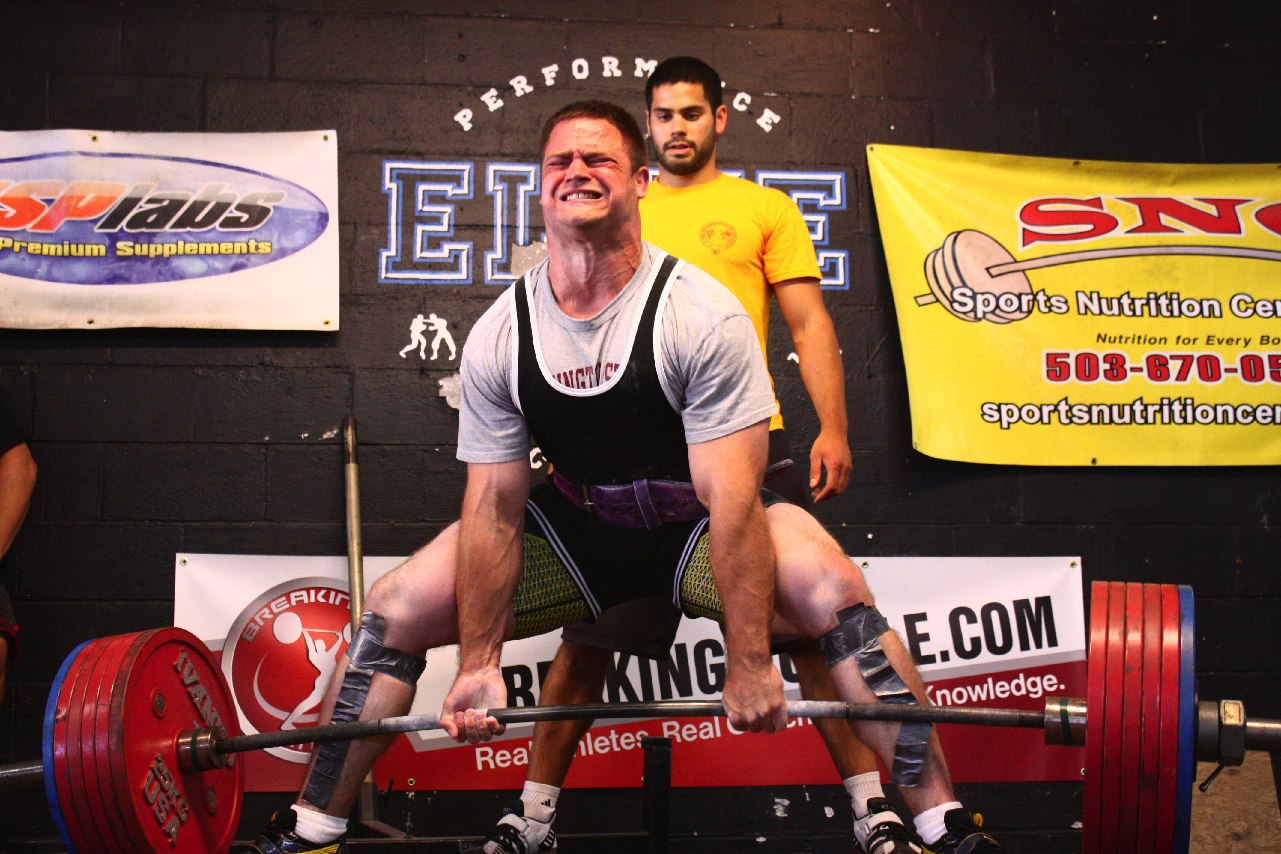 So, in summary, I use the sumo deadlift, in many variations, as a frontline rehab strength exercise for low back rehab. Konnichiwa, Grasshoppers.

Note: I’ve received a lot of international correspondence regarding the protocols I use for low back rehab and I’ve been way too busy with patients and my own training to answer so many questions. Until I finalize the last draft on my complete methods, I’ll write a few articles aimed at those questions.

Coach Lock will be conducting the Functional Strength and Rehabilitation Workshop with Greg Dea and Andrew Read, March 19-20, 2016 in Melbourne, Australia.

Photos 1 and 2 courtesy of Andrew Lock.