Here are two MRI scans that show the clear, undeniable proof of the failure of long-term Pilates training and the success of functional strength rehabilitation methods to cure low back pain.

So I am here to give to you, the trainers in the trenches, just what you need to have in your armory when engaging with one of these navel pullers of the New Age. Rather than smacking them upside the head with the rolled-up weekend edition of your local newspaper, as I usually do, you can now roll up a copy of this article and stuff it deep into their incredulous, slack-jawed mouths.

To begin de-programming a Pilates cult member, I suggest you take a leaf from A Clockwork Orange and strap the brainwashed subject into a barber’s chair, fix back their eyelids, and show them these MRI scans. If a picture says a thousand words, these pictures say a hell of a lot more: 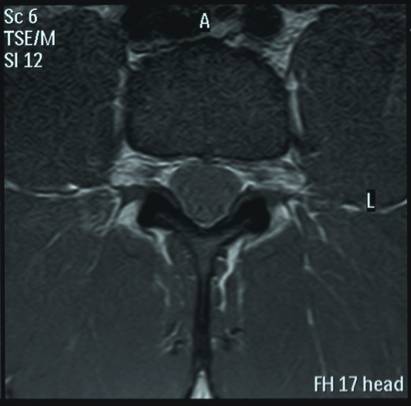 The two MRI scans you see here are clear, undeniable proof of the failure of long-term Pilates training and the success of functional strength rehabilitation methods to cure low back pain.

The MRI on the left is from a person who came to see me about her years of unresolved low back pain. She had been doing “clinical Pilates” three to four times per week for the last four years, and was still having low back pain. What you see in her scan is atrophic multifidus muscle in the lumbar spine. This is after four years of so-called rehabilitation. Her spinal musculature is lacking stabilizing muscle and is fat infiltrated. Her scan is otherwise clear of any problems. There is no disc injury, just poor musculature, and she was doing Pilates at one of the most respected Pilates teaching and rehabilitation centers in the country. And yes, she could perform an isolated transverse abdominis contraction.

The scan on the right is a guy who came to see me who had experienced a huge disc injury, including nerve involvement. Did that worry me? No. I’ve treated over 10,000 patients in the last twenty years and I began weight training as an athlete before I was a physical therapist. I assessed him and began him on functional strength rehabilitation. What you see in his scan is the result of his rehab. Massive paraspinal musculature and maximum multifidus hypertrophy.

What did he do for rehab? He did exactly what I prescribe – a progressive protocol that included deadlifting (he knew how to do it) in the early stage and culminated with double kettlebell swings and kettlebell Sots pressing at the end stage of rehab. The exact protocol I prescribe varies upon the patient’s presentation, but the paradigm is clear – progressive overload and functional movement loading. This athlete continued in his training, even with a bulge (I taught him the skills to manage the problem in training, I’ll teach you that in another article) and competed successfully at an international level weeks after the scan was taken.

Let’s take a closer look at the scans now so you can really sink your teeth into the Pilates jugular. I’ll start with what resulted from four years of clinical Pilates and transverse abdominis isolation rehabilitation protocols.

You don’t need a degree in radiology to understand these MRI scans, but I’ve helped to define the points I think are best. I’m not a graphic artist, just a genius, so put up with my efforts – it’s worth it. 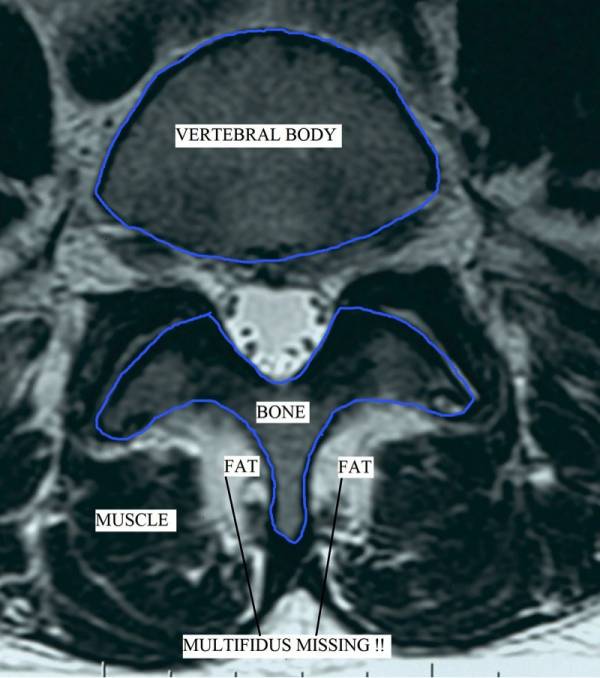 In this scan, the area where the fat is sitting is where the deeper layers of the multifidus muscle should be. It is not there. Fat is, and fat is not a very functional tissue to have next to your spine. The muscle you see is the dark tissues as indicated and the bone has been outlined for clarification. What you see is the result of non-functional transverse abdominis focused “core” training. Though they used the term “functional core,” it failed that requirement spectacularly. Why have these methods failed this person, and why has it been failing athletes as a method of low back rehabilitation? Move over and let me drive, I understand these streets.

First, let’s begin by enjoying the fruits of our intellectual labors, and revel in the results of functional strength rehabilitation. 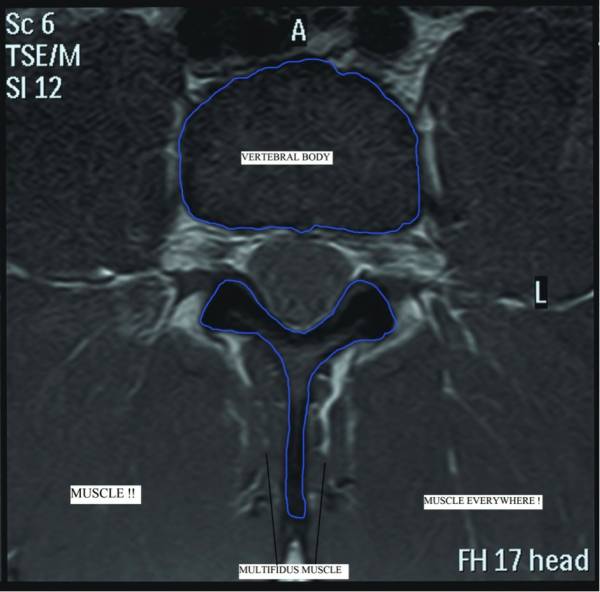 Muscle, muscle everywhere! Look at this scan it could come from a damn rodeo bull! Everything that should be hypertrophied is. This was after just four months of functional strength rehab. There is no mystery as to why functional strength rehabilitation protocols work and why core stability and Pilates methods fail. It is all in the science of anatomy and movement.

I have been studying science, injury, rehabilitation and strength for about 25 years. This involved thousands of patients and a lot of post-graduate study. I cannot show you, today, the exact methods I use to assess and rehab in this short article. This article is about results and the obvious science of successful rehabilitation principles. Principles you already know. I’m going to now put in place some of the foundation stones of successful rehabilitation, and highlight how the Pilates and core approach fails those basic human physiological principles.

Key points to be addressed in the low back rehabilitation:

So let us look at the facts of functional strength rehabilitation:

Yes, you all knew that. But why has it not been applied in the field of lumbar spine rehabilitation?

You must produce hypertrophy of the lumbar multifidus muscle. How does “pulling your bellybutton in towards your spine” while lying upon a reformer bed waving your arms and legs about like a dying turtle on its back in the midday sun produce a hypertrophic adaptation? Uh, it doesn’t, Beavis. The Pilates methods fail to impose significant enough overload to the musculature to produce functional hypertrophy. There is no overload to produce muscular hypertrophy that will translate to athletic demands. The specific adaptation you learn from Pilates is specific only to Pilates. 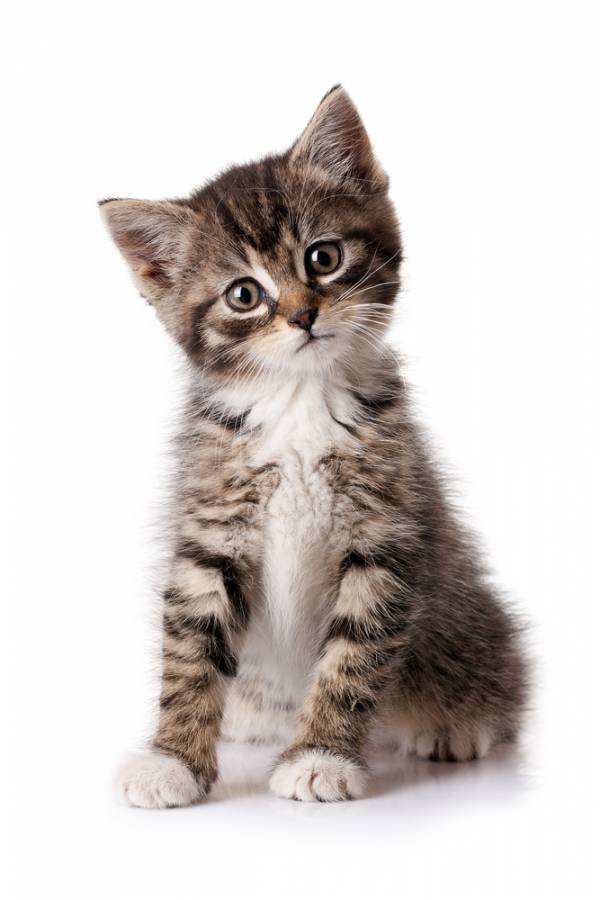 Functional rehabilitation requires movement specific overload, e.g. deadlift, kettlebell swing. Spectacularly, the research parroted by these transverse abdominis advocates is a study by Hoffer and Andreasson that contends contractions as low as 25% maximum voluntary contraction are able to provide maximal joint stiffness. This reference was a study of the soleus muscle of a cat that had been decerebrated (removed the cerebral brain function from). Do you think the study of a soleus muscle in a cat (quadruped), which had been brain injured, is reasonable support, or applicable to human beings (biped without brain injury)? But these numbers are often quoted by supporters of Pilates. 25% of a maximum contraction of transverse abdominis will not result in overload and hypertrophy of the multifidus, which is required for rehab. Also, transverse abdominis is not a lumbar stabilizing co-contractor with multifidus. No, it is not. Never was, and never will be.

So teaching a person to move correctly and to control a lumbar lordosis under load produces the single most effective method of overload, movement specific function, and pain-free low back restoration. You begin deadlifting and kettlebell swinging early. This keys into why back pain is recurrent. People are not addressing functional movement patterns. By functional movement pattern I do not mean that confounding, stupid fitball exercise involving some sort of damn cable machine and a delirious rapturous grin from a personal trainer. The rule of thumb these people seem to use is, “If it looks dangerous or stupid, tell the client it is for their functional core.” In science functional means functional, not fucking stupid.

Now, there are important protocols, assessments and progressions within functional strength rehabilitation to produce the outcome I have demonstrated. This article is not here to show you what they are. Those articles come later. This article is specifically focused to show the superiority of progressive overload and applied strength science to the superstition and blind belief systems that now dominate low back rehab in the minds many health professionals. It is time for professional trainers to take back the rehabilitation work that is really theirs in the first place. It might mean a lot more study for you, but I’ll also be the first to tell you – being smart feels good.

Okay, now I’m off to write a book on the science and methods of successful strength rehabilitation. Now let’s see, how will I begin? I know I’ll begin with, “Call me Ishmael.”