So, you’re now comfortable with precision jumps, striding, and basic balancing skills. Your rolls are looking solid and aren’t causing any pain. You can vault medium-height obstacles with confidence. And, you’re starting to climb tall walls with speed.

Congratulations! You’re now ready to start tying everything together into the fun part of your training. Once you’ve got a basic command of the common movements found in parkour, it’s time begin drilling the movements in sequential patterns.

Think of Movement as Music

In the movement arts, including martial arts and dance, the introduction to sequences of movements can be thought of in the way musicians learn to make music out of basic notes. Once a flutist understands how to create the desired tones by manipulating her instrument with breath and finger placements, she can start to tie a sequence of notes into musical phrases. What starts out choppy eventually begins to blend together. By building competence with phrases of music, she gains the ability to tie everything together into a beautiful song.

The APEX Movement instructors, Ryan Ford and Amos Rendao, take the movement-as-music metaphor one step further to say that as your parkour skills improve, you can begin to improvise movement sequences, the way a jazz musician creates new music on the spot.

Time to Make Your Music

So, that’s what you’re going to start doing at this phase in your parkour training. Take some of the skills that you have under your belt and piece them together into a movement flow.

At the most basic level, begin with tying together two similar moves, such as two vault variations. Find a set of obstacles that are spaced an appropriate distance for you to vault one and take a few steps and vault the other. Start with just doing a step/safety vault with your left foot first and then alternating to lead with the opposite side on the second vault.

Repeat this sequence dozens, if not hundreds, of times until the moves flow together with minimal hesitation. Strive to eliminate extra steps (stutter stepping) between the two obstacles, and let your subconscious mind take over steering your body.

After that, begin mixing up the two types of movements. Can you transition from a vault to a roll smoothly? How about switching gears from a vault to a precision landing? Be creative and drill as many two-movement variations that you can think of: precision jump to roll, stride to vault, vault to climb-up. You get the picture.

Make a Whole Song, Not Just a Phrase

For a second phase of sequence drilling, start to tie three, four, and five skills together into longer flow lines. Create a run through a series of obstacles that demands a variety of movements. Can you transition from swinging from your arms to a precision landing, into striding, and then to a vault without tripping over your feet? If it feels awkward and clumsy at first, cycle through the run over and over again until it begins to flow better.

Repetition is key at this point in your training. Drill the movements and sequences over and over again, focusing on making your movements more and more efficient. Achieve perfection through elimination. Work to cut out any stutter steps. Get rid of unnecessary body movements. Stop flapping your arms. Keep your chest up and pay attention to your posture.

Similarly, what is your breathing like as you move through the sequences of skills? Are you holding your breath? Are you short of breath and panting? Try to pace your breaths to match your movements and give you better stamina through out the series of obstacles.

Bottom line: Pay attention and be as present as possible during the sequences that you start to drill. Sure, you want to your movements to flow like water, but at the same time you want to be very intentional.

Instead of chucking a series of movements and accomplishing the run with brute force, strive to tie the moves together with as much grace as you can. Think of yourself like a dancer, interacting with the environment with virtuosity and poise. Be the musician, letting the notes flow into a smooth melody. 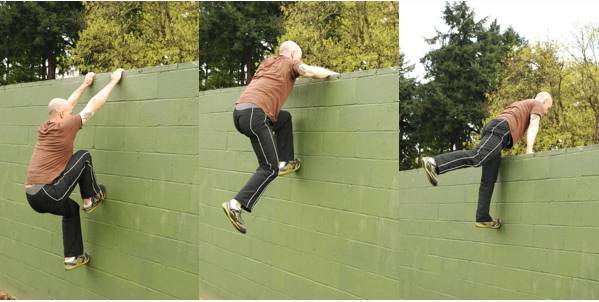 How to Play the Add-on Game

“Add-on” is a fun game that you can play with a partner to help drill sequential movements together. It is a game well known across the spectrum of creative athletes – gymnasts, skateboarders, and even snowboarders. The key value is that play helps you break out of your rigidity and lets movement start to unfold in natural sequences.

Here is how you play Add-on:

From there, you can imagine how the game unfolds. Each player performs the last sequence of movements, and adds a new skill, so that you end up with a long chain of unique movements tied together. It ends when someone cannot complete last performed sequence or you both are simply drop dead, tired from having too much fun!

Here is an example of a game of Add-on:

You can even play add-on with a group of people, but the logistics of who gets to add a new skill can quickly become hard to follow. Still, don’t be afraid to add some creativity, like a cartwheel, or even a basic tuck jump. Dig in and play your heart out!

Ben Musholt is licensed physical therapist who has practiced in Portland, Oregon since 2001. He is a co-founder of Beyond the Clinic physical therapy, and also runs BPM Rx, Inc., which is an online exercise prescription program. He has a diverse movement background, spanning board sports, martial arts, and gymnastics.

He has trained parkour for many years and is a certified parkour coach through APEX Movement. He operates the blog Parkour Conditioning and was a contestant on American Ninja Warrior in 2012. You can see him in action on his YouTube channel BPMRx. He is also the author of the Mad Skills Exercise Encyclopedia.

Ben loves to move and enjoys helping others become better athletes. Whether conducting injury prevention seminars, leading garage workouts, or romping around the park, he is always in motion. His goal is to do three fun physical activities each day: Try to keep up!