Muay Thai Workout: Training for the Art of 8 Limbs

As both a strength coach and muay Thai practitioner, I can tell you that having a solid base of strength in place can result in knockouts in the ring.

When it comes to striking in the sport of MMA, there is a certain art form that many fighters adopt for the stand-up portion of their training that is based on an ancient form known as the art of eight limbs. This art is also known as muay Thai.

This is no joke, and there is good reason for muay Thai having this alternate name. The concept is derived from the fact that a fighter can strike using the hands, elbows, knees, and legs. Hence, the art of eight limbs.

As both a strength coach and muay Thai practitioner, I can tell you that having a solid base of strength in place can result in a great deal of knockouts in the ring. This comes with a well-rounded strength and conditioning program designed with the physical needs of a Thai fighter in mind.

I had the fortunate opportunity to train my good friend Jeff Perry who is formally ranked sixth in the world in muay Thai and has had his share of knockouts inside the squared-circle. Here is a highlight video of his:

In Jeff’s strength and conditioning program, along with those of several of my other fight athletes, I like to focus on the development of both total-body strength as well as speed and power production.

Thai fighters are obviously explosive athletes and have to be well trained in performing movements with rapid ability in order to successfully land blows on their opponents inside the ring. But in addition to being a collision sport, muay Thai is also a focused chess match in which both fighters must express a rhythm and patience before an opening may present itself. These openings allow them to take a shot and capitalize on their opponent during the fight.

Elements of Strength and Conditioning for the Muay Thai Fighter

In order to wait for and capitalize on these openings, the successful fighter requires all-out cardiovascular conditioning. He or she also requires a significant level of strength in the transverse plane of motion in order to execute effective strikes and punches from the upper and lower portions of the body.

The energy from a Thai strike – whether it be a punch, elbow, knee, or kick – starts from the ground and moves up the fighter’s body to be delivered with a significant level of rotation throughout the fighter’s torso. This rotational movement is key for helping a Thai fighter strike with respectable force and with the intent on breaking his or her opponent in the process. Yes, in the words of the great Dolph Lundgren from Rocky IV the Thai fighter is thinking, “I must break you.”

When working with my fighters I love to include the standard deadlift by performing heavy sets, as well as lighter sets with speed. Not only is this great for helping the Thai fighter develop overall strength, it’s also great for building dynamic core strength, hip drive, leg power, and grip strength, which is necessary for clinching action.

As far as enhancing rotational movement, I’m big on implementing athletic drills such as rotational medicine ball slams and other similar drills to promote lumbar and thoracic rotation. Of course, regular kettlebell work is always part of the package, too. 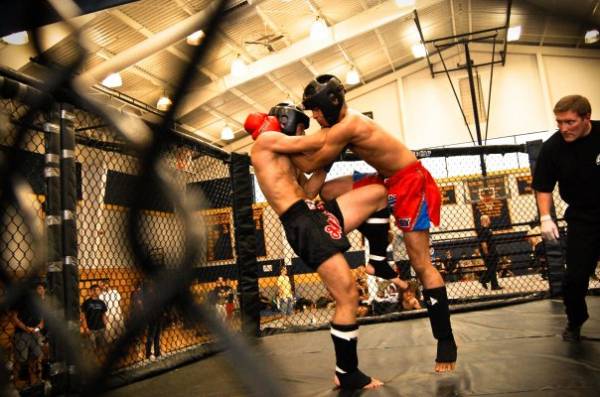 A sample workout for one of my Thai fighters may look like the following:

Standard Deadlift: 2 warm up sets and then 5×5 heavy

For Halos: Hold Olympic plate or kettlebell by the horns and circle around the head and shoulder girdle, starting at the chest clockwise and then counterclockwise for 5 reps. When using the kettlebell, make sure the bell is upside down.

For Throws: Pivot front foot and throw across the body by turning the hips. Perform both right and left sides. With the medicine ball you can throw against the wall using either a sand filled ball or with a rubberized ball for additional bouncing. With a rubberized ball allow for more throwing space because of greater bouncing. With a tire all you need is your front yard.

Note: Before performing any plyometric drills, be certain of your ability and consult with a professional strength coach. Also vary the height of the box depending on your level of ability.

Perform double leg jumps by jumping hard off both legs and landing soft on both feet. You shouldn’t “stampede” or “bash” your jumps in an attempt to just finish. Take your time and make sure to land softly and to absorb your landing with each jump by flexing at the hips and knees. Land on top of the box flat footed and not on the balls of your feet.

Perform single leg jumps by jumping hard off of one leg and landing on that same foot on top of the box. These are great for developing leg power for speed, :kicking, and jumping.

Absolute strength and quality movement make for a dangerous combination in a Thai fighter. I said a Muay Thai fight was a chess match, but I promise you that a chess match with a well-prepared and conditioned Thai fighter will be the longest three minutes of your entire life.