Sam Sheridan is a Harvard grad and a writer. Sam Sheridan is also a fighter. He has a muay Thai fight under his belt, which he wrote about in his well-known 2007 book, A Fighter’s Heart. It’s a great read and nails the essence of why we fight, what it takes physically to do so, and what we fight for – love. Sheridan points out that we fight for those we love, for respect, and more than anything for the love of the fight itself. A Fighter’s Heart is a largely a glimpse (through Sheridan’s own journey) of what it takes to train like a fighter.

While the book does a brilliant job in breaking down what it takes to be a fighter day in and day out, A Fighter’s Heart is more about the will or heart of a fighter rather than the mind of a fighter. In order to dig deeper into the mind of a fighter, Sheridan followed up his first book with A Fighter’s Mind in 2010. This book is fascinating because many don’t think of fighting as a thinking man’s sport, but in reality, it’s the ultimate thinking man’s sport. Sheridan himself embodies this paradox in fighting – the willingness to display brutal and savage physicality coupled with the ultimate mental challenge – facing our enemy as well as ourselves.

Typically, we tend to think of fighting as a physical action, broken down into physical bits and pieces. I’ve written extensively on the physicality of fighting, discussing topics such as how to throw the best jab, or how you execute a great roundhouse kick. Indeed the physicality of the martial arts is the nuts and bolts of fighting. To craft the best weapon and armor we should spend much of our time perfecting these physical tools. However, how and when to deploy our weapons and armor is largely a function of the mind.

We see this in every arena of sport. The greatest champions are those who possess the sweet spot of mental toughness coupled with athleticism and physical tenacity. In fighting, this combination is even more pronounced because the stakes are higher (your life might actually be on the line). It takes both a smart and introspective individual to look at all of the variables and think strategically in a fight. The physicality and tactics used in fighting are nothing without the strategy behind it. As Sun Zu said, “Ponder and deliberate before you make a move.”

One of the often-used analogies to the fight game is that of chess. It’s a bit ironic given that chess has long been associated with society’s elite and upper crust, whereas fighting sports like boxing are often identified with the poorest parts of the inner city. Boxers literally fight their way out of the slums in some cases. There are rare exceptions to this generality, like former UFC lightweight champ BJ Penn, who came from a well-to-do upbringing. The general rule of thumb however is that fighters tend to come from disadvantaged and poor socio-economic backgrounds. There aren’t a lot of Harvard grads or (chess prodigies for that matter) in and around the boxing gyms and MMA schools.

But from my own observations, and I am sure Sheridan would corroborate, it takes real smarts to succeed as a fighter – street smarts, book smarts, and more than anything, self-awareness. Another author who would agree is Josh Waitzkin. Waitzkin is a former chess prodigy (the main character in the movie Searching For Bobby Fisher is based on him). After competing at the highest levels in chess, Waitzkin went on to compete in a very different arena, the martial arts. He, like Sheridan, chronicled his competition journey in his book, The Art of Learning: An Inner Journey To Optimal Performance. In discussing the similarities of chess and the martial arts, Waitzkin observed, “Both chess and the martial arts involve internalizing tremendously complex information into a sense of flow.”

There are many chess-to-fighting analogies we can apply to our work in honing our craft as martial artists. These same lessons also apply to life, in that we all encounter battles in and out of the ring. Chess is a constant ebb and flow in defending and attacking, just like being in a fight. Chess also happens under the constraints of time, pressure, and ego as we experience in the ring or the workplace. The critical element in chess is to apply strategy through knowledge of self and knowledge of one’s opponent.

Here are a few key lessons that apply to both chess and the martial arts:

1. Check your ego and learn to be the aggressor and the defender. I never mind fighting defensively. There tends to be a fair amount of ego at a boxing gyms and MMA schools, and there are plenty of people who only move forward and always on the attack. My advice: let them. Attacking takes energy and doing so constantly will cause fatigue. If called for, allow your opponent to be the aggressor and don’t always try to match his power. That is your ego talking. Instead, let your opponent tire and find a weakness in his offense. I’d rather fight defensively and win, then fight offensively and lose. 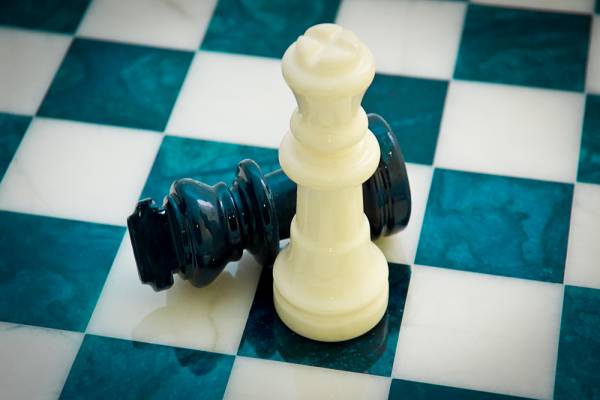 2. Three strikes and you’re out. My boxing coach used to say this mantra to me frequently. If my opponent is any good, he’s noticing my tendencies and especially my mistakes. For instance, if I drop my right hand when I throw my jab, I might be able to get away with such a mistake once or even twice, but by that third time a good opponent will capitalize. A good chess player does the same – constantly studying the board and his adversary. Make sure to move deliberately, but differently. Don’t repeat your patterns and habits, or your opponent will make you pay.

3. Deal with loss. In chess you lose pieces; it’s part of the game. Your defense weakens over time. It’s here where champions are made, though. Great warriors figure out how to do more with less. In a fight, fatigue, injury, doubt, and fear can overwhelm. Have a strategy to persevere when your defense is weakened.

4. Know thyself. It takes a killer work ethic to win. It takes skill. It takes heart to win. It also takes humility and the ability to know ourselves. In a fight, or a championship chess match for that matter, we will have to face ourselves in addition to facing our opponent.

I’ll give Josh Waitzkin the final word on the subject:

“Chess and the martial arts are both about developing a rich working relationship with your intuition. We are forced to be relentlessly introspective, to take on our weaknesses and build games around our specific nuances of character … if you haven’t taken yourself on truly and deeply – it’ll come out and destroy you when the pressure is on.” – Josh Waitzkin