The Argument for Selling Supplements

There’s (almost) nothing as loathsome to me as trainers who become business gurus. You have to possess an incredible amount of street cred to make that move, and honestly, it’s a turn off to athletes to read the Twitter feed of their coach and see themselves being called “clients.”

Still, for small business owners like CrossFit affiliates, knowing how much additional revenue per visit (i.e. juice bar and t-shirt sales) you can expect from everyone who steps through your doors is a necessary part of the life. Selling nutritional supplements can help…err…supplement your income. But it’s mostly former trainers we find giving everyone else business advice and offering to help by sharing their secret: you should start selling supplements, or rather, start selling the ones they’re going to tell you about.

To be honest, CrossFitters use supplements. They use a lot of total garbage, in my estimation, but that’s not really the point. The point is that you train people who are buying stuff you could sell to them. And everyone at every box I’ve ever spoken with would rather see their coach earning that money than some online retailer or local supplement store.

Obviously I’m pro-supplement. The people who drone on about “just eat right” are depriving themselves of maximal results. It’s beyond our scope here, but I’m confident in my ability to make a good case for dietary supplements being necessary to maximize a training program. I believe boxes should sell supplements because athletes will benefit from them (which benefits the coach, because they make more progress), and because there is a demand (and that money will be going into someone’s pocket, so why not yours).

I believe that selling supplements will help the average box owner by providing an additional low-maintenance revenue stream. But I don’t believe MLM supplements will accomplish this. I’m not going to name names, but let’s just say I’m talking about the big three. You can guess who they are, as they’re literally the three biggest MLM supplement companies in the CrossFit world.

What Is an MLM?

Briefly stated, multilevel marketing is when you sell products, you recruit other people to sell them, and then those people recruit people, and so forth. The person who did the initial recruiting will get a percentage of everyone’s sales down the line. Everything sold by someone you recruited or someone they recruited results in a percentage going to you.

It’s easy to understand why this is so appealing from a financial standpoint. Once you’ve recruited enough people, who keep recruiting and selling, you can retire and watch your annual income keep increasing as your sales people keep selling and recruiting.

The whole idea makes sense, because as long as everyone you recruit can come in contact with another person or two, and they can get them to do the same, then we’re talking about exponential growth in a short period of time. Put more simply, it’s the same market force as we would see driving the zombie apocalypse – each person who gets bit becomes a zombie, and bites another, and another, and pretty soon we’re waiting for Daryl and Rick to come save us from The Governor. 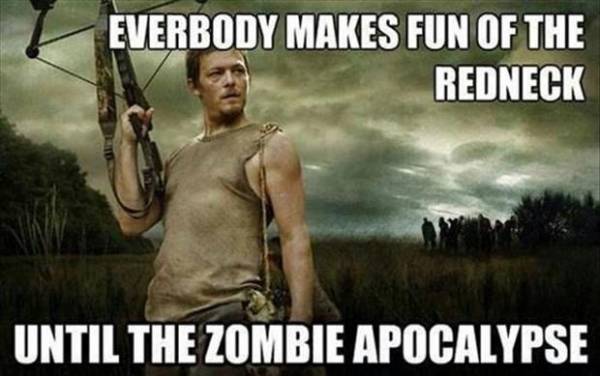 So What’s the Problem?

This type of program requires a somewhat aggressive sales pitch, so we often see newly minted MLM salesmen flooding their social media accounts with talk of the great new team they’ve joined and the awesome new products they’ve got. It’s annoying to see that kind of thing on someone’s Facebook page 24/7, and it doesn’t exactly ooze credibility.

Alright, so what’s my issue here? So far there’s really nothing too awful about the whole MLM thing. It’s basically just another small business venture, right? Well, not really.

Trouble comes into paradise when we start looking at the actual revenue being earned by people selling these products – which is nothing. That’s right, most people who sell products for a company that has an MLM structure earn absolutely nothing. Most people who get involved with MLM companies will end up losing money, statistically speaking.

This is true across the board, and anyone who tells you differently is lying. There is a small group of people making good money from these companies and a legion of people who never made a dime (or lost money). Some of the companies in question don’t even track statistics like this (i.e. how many people lose money working with the company), which to me is simply grasping at plausible deniability. If you’d created an amazing platform for generating wealth, you’d be documenting it and telling everyone that X percentage of your sales force is earning six figures (or whatever).

What none of these companies tell you is that they’re selling failure. Most people never earn a dime. They lose money in astonishing amounts. In fact, they lose so much money that the FTC is currently investigating a major MLM company and class actions lawsuits have started to form against them.

This model is particularly bad for box owners, because the majority of potential sales are going to be your existing clients. This means you have little ability to recruit an outside sales force with a reach that extends significantly beyond your own. So the most compelling reason to get involved with an MLM is nullified by the sheer fact that you would be limited by the same factors that make you an attractive salesperson. The upstream salesman who recruited you will earn money from you, but you’ll be unlikely to effectively do the same type of recruiting. The CrossFit affiliate model makes MLM sales particularly unattractive for a box owner because of their homogeneous sphere of influence.

Also, the margins for MLM sales, minus the recruitment factor, aren’t as good (again, painting in broad strokes) when compared to the margins you could get from a reputable distributor on similar products. Why not just sell those products instead of some other brand? 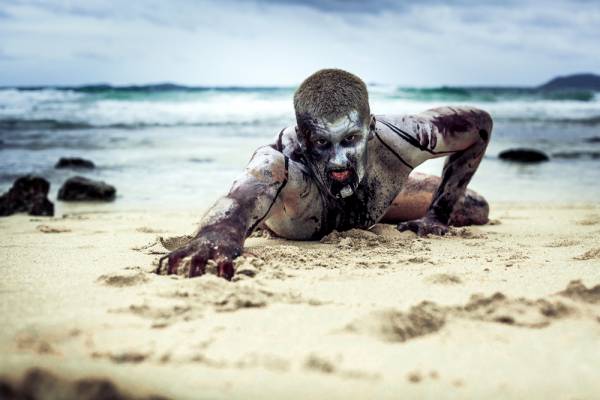 What If You Just Want to Sell, But Not Recruit?

Okay, so you aren’t going to recruit other people to sell this stuff for you, but what’s the problem with carrying the line and earning money that way? The problem is that the products, and I realize that once again I’m painting with broad strokes here, aren’t very good.

I’ve done my research into the offerings from the major MLM companies, and I don’t believe they offer anything unique or innovative to the CrossFit community. Most of the products I examined (basically all of them from all of the major players) are mediocre. Think about it: if your company made the best dietary supplements on the market, why wouldn’t you want to be sold by all of the major retailers? Why would you limit your sales to outlets where there was no competition (i.e. direct sales)?

Even if these products were equivalent to their competition, they have no advertising to speak of. We see dietary supplements marketed everywhere, from the UFC to bodybuilding contests to local fitness throwdowns. But MLM companies are almost completely absent from these venues. I was at the 2013 CrossFit Games and there were exactly zero MLM company booths.

Not a single one of these companies has invested in advertising to your market. So why in the world would you sell a product that doesn’t provide advertising assistance? Consider this: how many times have you witnessed someone asking about one of these products versus how many have you seen one of their salespersons shilling for people to join their team? I’ve never seen someone asking about a product from any of these companies. On the other hand, I can’t remember a single day when I didn’t see someone trying to recruit a new salesperson to his or her MLM team.

Yes, a big name has recently signed with an MLM company. But it’s my opinion that this was a case of necessity, since that athlete’s retirement from individual competition has already been announced and supplement companies don’t sponsor retired athletes. The MLM structure allows this athlete to continue earning money despite retirement. There are many brands that are already established in our community, several of them make decent products, and some are even owned by people who aren’t loathsome asshats. How about you patronize those companies and support the people who support your community?

The brands who invest the most into the CrossFit community, through time spent or sponsorship, are likely to be the ones who sell the greatest amount of products to us and with the greatest ease for a box owner who carries them. Of course advertising factors into this (and I realize that the best products are rarely the most heavily advertised), but you get the idea.

The conclusion is that you’re best served carrying anything but MLM products in your box. Plenty of companies sell direct to boxes, and as a bonus, if you’re regularly making bulk purchases from a supplement company, it’s easier to approach those companies and ask them to sponsor your next event or an athlete you coach, get some free samples, garner some seminar help, etc. These types of relationships with people within the community are going to take you a lot farther than the pipe dream of retiring at 45 while the zombie sales force you recruited continues to infect people. 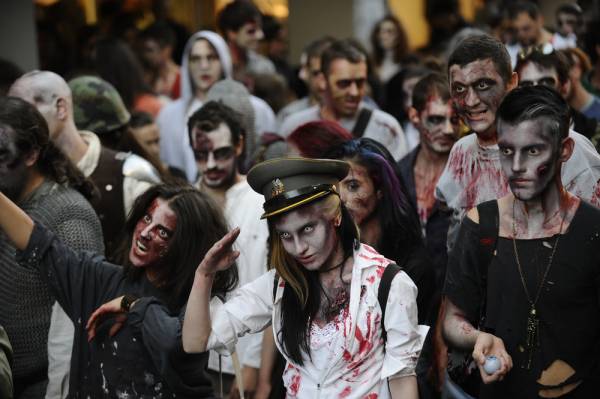 As a final note, I’m aware that many people who are attempting to earn a living through MLM sales will feel compelled to leave a reply in the comments section of this article promoting their own brand. I’d advise against that.

I was nice enough not to mention your company by name, but you should consider the fact that I’ve worked in the supplement industry for nearly a decade and that I’ve exhaustively researched every major MLM company on the market, as well as pulled all of the lawsuits, studies, and consumer complaints. Should you decide to comment, I will gladly reply with documented facts, specific to your company. Trust me. Don’t do it.

Anthony Roberts holds a BA in both English and philosophy, with a minor in women's studies. He is the author of three books on the subject of performance enhancing drugs, is a staff writer for Muscle Evolution magazine, and a member in good standing of the Society for Professional Journalists.

Anthony is also a certified trainer and coach, and a professional member of the National Strength and Conditioning Association. At age seventeen he won a silver medal in martial arts at the Garden State Games, black belt division, then began playing rugby at age eighteen. After four years of captaining Seton Hall's team, and two appearances in the Collegiate National All Star Game, Anthony moved to New Zealand to play for a club in the first division. Upon his return he continued playing for a first division men's club, while spending a season as an assistant coach at a federal military college, followed by three seasons as head coach, leading to a national ranking of thirteen and two first division championships.

Anthony has worked in the dietary supplement world for the past decade, where he has introduced new ingredients to the market, formulated numerous products, sourced and sold raw materials, and provided consulting services to companies that range in size from small start-ups to some of the largest in the industry.