Athletes with game-changing speed are like superheroes – rare, exciting, and mysterious. They might as well be wearing capes as they barrel past their opponents at what appears to be the speed of light. These athletes are capable of making unexpected and exciting plays that wow viewers and frustrate competitors. After all, impressive speed is pretty much an athletic superpower.

Of all physical abilities an athlete can posses, speed is the most valuable. Research suggests the most common characteristic among highly recruited football players is speed.1 The best players go to the best teams, and those teams win championships. So the million-dollar question becomes “How do you train to run faster?”

In order to train properly for speed development, we have to first understand the characteristics that make an athlete fast. If we understand the biomechanics of great sprinters, we can connect the dots and use research to design training programs that target and strengthen the muscles that make it possible to run faster.

What Makes an Athlete Fast?

“In order to train properly for speed development, we have to first understand the characteristics that make an athlete fast.”

What Makes an Athlete Really Fast?

Training for Strength Versus Power

Strength training focuses on increasing force output by increasing the load or amount of weight an athlete uses while training. The speed of the lift isn’t necessarily important, just the amount of weight lifted. It’s obviously not easy to move quickly in a back squat loaded with 600lbs.

Power, on the other hand, is the ability to apply force quickly. Speed and force have an inverse relationship. As the speed of a movement increases, the amount of force produced decreases.

In order to find the optimal load to maximize power production, an athlete should use a weight that allows for a quick movement, but also requires him or her to generate a large amount of force. Remember, elite sprinters are not only able to produce a large amount of horizontal force, but they are able to do so incredibly quickly.

The ability to generate force quickly explains why an incredibly strong football player might excel in the weight room with heavy weights but struggle in measures of power like the forty-yard dash.

General recommendations suggest a load ranging from thirty to sixty percent of the athlete’s one-rep-max. This will provide a decent starting point for the athlete, but every athlete and exercise variation will differ when it comes to optimal loads for power production. 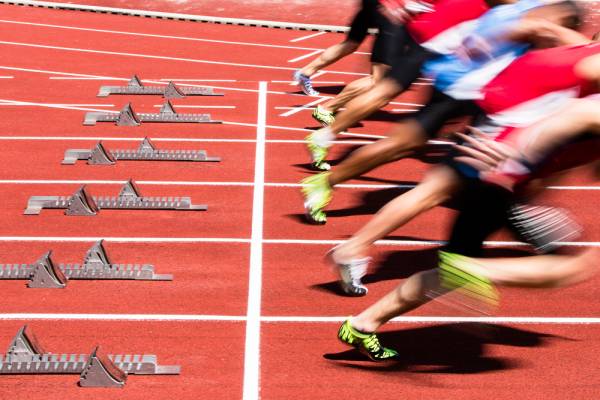 Breaking Down the Biomechanics of Sprinting

So we know elite sprinters are able to quickly produce massive amounts of force and primarily in a horizontal direction. Let’s break down the muscles used to generate that force and use research to help us select the best possible exercises to improve our horizontal force and power output.

All Hamstring Exercises Are Not Created Equal

A recent study in the Journal of Strength and Conditioning Research assessed the degree of muscle activation across four hamstring exercises (using EMG). The exercises were Romanian deadlifts (RDLs), glute ham raises (GHRs), good mornings, and leg curls. The exercises were tested using 85% of the participants’ one-rep-max.

“[W]e need to focus on training our hip extensors – primarily our hamstrings – if we want to increase running speed.”

The study found RDLs and GHRs produced more significant hamstring muscle activation than any other exercise.6 So, if we want to maximize hamstring strength and power gains, we need to include these two exercises in our training.

The RDL motion is relatively straightforward, but there are subtleties to focus on to improve the effectiveness of the lift:

If you’re using a traditional glute ham machine or GHD with a semi-spherical thigh pad, placing your knees closer to the apex of the pad will engage your hamstrings more effectively than placing your knees lower on the pad. A hybrid glute ham machine is a better option for targeting and isolating the hamstrings because it uses the knee as a pivot, which increases muscle activation. 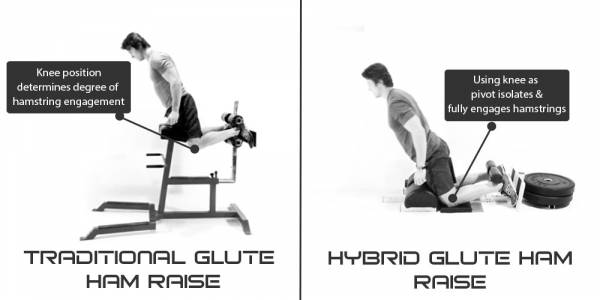 GHRs are a great exercise because there are many variations and combinations to help you mix up training and start developing explosive posterior power immediately. Choosing your GHR combos is the exciting part. With the traditional and hybrid GHDs, try the following exercise combinations. These are arranged from beginner to elite.

Muscles are approximately forty percent stronger during eccentric contractions (extending out during the GHD raise, muscle lengthening) than during concentric contractions (pulling yourself up, muscle shortening). Eccentric training is a great way to quickly build strength. Eccentric GHR + Reps is probably the toughest GHR variation on the list.

Initiate this movement by relaxing your hamstrings and letting your body fall toward the ground. As your knees come within a few degrees of extension, violently contract your hamstrings to catch yourself at the bottom of the movement.

Muscle spindles are proprioceptive organs that are sensitive to the rate and magnitude of a stretch. When a quick stretch is detected, the hamstring muscles react by producing more force than they would during the concentric or eccentric phase of the movement. If we can work to increase the amount of power that hamstrings produce, we can increase our sprinting speed.

Research has shed light on the importance of horizontal force production as the most critical component to develop in order to improve speed, but that doesn’t mean we should focus solely on our hamstrings and hip extensors. Horizontal force production is also generated from forceful arm movements and powerful quadriceps. Though lifts like back squats lack specificity and have little in common with the mechanics of sprinting, studies suggest improving your one-rep-back squat max can improve sprint times.7

“If we can work to increase the amount of power that hamstrings produce, we can increase our sprinting speed.”

Increasing the amount of hamstring work you include in your training will significantly improve your sprint times and make you a more dynamic athlete on the field. Our focus has been on building powerful hamstrings because these are the muscles primarily responsible for propelling us down the field, track, or court but also because these muscles are under-trained and under-developed in the vast majority of athletes.

Superheroes have caves and secret lairs equipped with the latest gadgets and information to help increase their superhuman powers. Your mission, if you choose to accept it, is to incorporate more RDLs and glute ham variations into your training. While your competition is busy with the same-old training routines, you will be developing superhuman-like speed that will make your competitors fear you. Who knows, maybe someday you’ll be someone’s superhero!

1. Ghigiarelli, JJ. 2009. “Combine Performance Descriptors and Predictors of Recruit Ranking for the Top High School Football Recruits from 2001 to 2009: Differences between Position Groups.” Journal of Strength and Conditioning Research 25(5):1193–203.

Justin Fallhowe is a Certified Strength and Conditioning Specialist and founder of SpeedBot. After years of training and athletic competition, Justin realized that yielding dramatic speed and strength results required a dynamic and intelligent program to constantly evaluate and analyze an athlete’s training data and individually adjust workouts accordingly. This is why he developed SpeedBot.

Justin is a huge believer in balanced strength, specifically when it comes to hamstring training.He believes that athletes do not fully understand the benefits of hamstring training and the positive impact that hamstring strength has on athletic performance and injury prevention.

In his spare time Justin enjoys spending time with his wife and dog, playing piano, and guitar, and listening to the same song on repeat for hours on end.