In 1965, daredevil Evel Knievel made his first motorcycle jump, jumping his bike forty feet over boxes of rattlesnakes. In 1974, he attempted to jump his “skycycle” over the Snake River Canyon, three quarters of a mile across.

In the decade between, every successive jump he made was longer and more spectacular. He went from jumping thirteen cars to jumping nineteen, to ten trucks, to fifty cars stacked in a pile, to thirteen Mack trucks, to fourteen Greyhound busses, to a tank full of sharks. The nature of Knievel’s career demanded that he push the envelope.

His was not a sport constrained by a longstanding set of rules of play. It was spectacle for spectacle’s sake, and he knew the only way to sustain interest was to make every jump more outrageous.

Shortly before the jump, Knievel appeared on the Tonight Show, fully decked out in a fur cape, and carrying a diamond-studded walking stick. He was at the height of his clown-as-royalty act.

In 2007, the CrossFIt games got underway in Aromas California, consisting of three workouts over two days. Eight years later, the Games spans five days, with four of those being competition days, and a dozen workouts.

In the eight years between, every successive competition has been longer and more spectacular. It has gone from three events in 2007 to four in 2008, eight in 2009, and nine in 2010 over three days. And then we have 2015 where athletes began their competition week on Wednesday with an arduous ocean swim and concluded it Sunday night with, as I write this: “TBA.”

“The trending word this year out of Carson was ‘beatdown.’”

The nature of the CrossFit Games demands that organizer Dave Castro push the envelope. This is not a sport constrained by a longstanding set of rules of play. No, in today’s competitive fitness market, legend dictates that each CrossFIt Games be bigger than the one before. In a constant need to push past the standard fitness tests of yesteryear, the Games has developed from a test of fitness to a test of survival. It has become not a test of cardiovascular endurance, stamina, strength, flexibility, and speed, but a test of how much one is willing and able to suffer.

But if the CrossFit Games is a test to find the fittest on earth, it is also a show. It is packaged for streaming and for ESPN, and there are spectators by the thousands. As a show, as entertainment, the tests must be developed in such a way as to culminate in the final event on Sunday night. Ergo, the mere fact that entertainment value must be factored into the programming pollutes the actual test of fitness. If you were truly seeking to test the fittest on earth, giving consideration to how it plays to the crowd would be a bastardization of the process.

As a result, the powers that be (and as far as I can determine the only real power is Dave Castro) in making programming decisions must take the Evel Knievel approach: “How can we top last year? How can we really give them a show that will blow their minds?”

The trending word this year out of Carson was “beatdown.” Without question, the volume has been high in previous Games. Ocean swim events have been going on since 2011, and in 2013 we saw a row marathon. But even a cursory view of last year’s events reveals nowhere near the mind-numbing volume of the 2015 Games.

Granted, most CrossFitters do “Murph” on Memorial Day, many times in oppressive heat and many times with a weight vest. And often, we mere mortals are ruined by the event for days on end and rarely are we doing it as competition. We have our water bottles nearby and are usually in front of a big-ass fan. Indoors.

But these fittest-on-earth specimens were dropping like flies. By now many have seen that Kara Webb was virtually walking dead as she ran her final mile.

Annie Thorisdottir was taken off on a stretcher as well and ultimately had to withdraw due to what her medical team described as “heat stroke.”

Annie Thorisdottir, CrossFit’s poster child for years, may have kidney damage from the Games. Let that sink in folks. We’ve gone past “these people know what they are getting into” to “one of the fittest females on Earth may have permanent repercussions from this contest.”

If you read the interview with Emily Abbott, who finished eight overall as a female individual athelete, you can see that “Murph” had a profound effect on not only her, but also many of the athletes. She said, “I was looking at everyone in the corral, and everyone looked so fucked up. You could see it in their eyes. Kara Webb passed out after Murph and said she came to when she was being wheeled into the the [sic] medical area.” And continued, “I was pretty angry after Murph. I felt like, ‘This is just ridiculous. I feel like we were part of a circus.”

“And while every year there is concern expressed over programming, this year was different. The mighty were falling.”

After “Murph” and the speed ladder, CrossFit took to the Twitterverse and polled fans as to which workout should come next – “Heavy DT” or “Double DT.” Yes, you heard that right – the fans got to pick the final workout of the day on Friday.

By Sunday afternoon, Facebook had lit up with outrage over the programming. Never before had it seemed that so many people were being stretchered off. Khan Porter was close to withdrawing over concerns about rhabdo, Annie was out, Maddy Myers was out. Porter was clearly affected by “Murph” because a finely tuned athlete like him, after a second-place finish in the opening event, languishing at the bottom makes little sense.

And while every year there is concern expressed over programming, this year was different. The mighty were falling. We’d never seen suffering on this scale or remarks like those of Emily Abbott.

It all goes back to the Evel Knievel theory. When there is pressure to not only top yourself, but to entertain, you’re no longer testing fitness. So what are we testing? 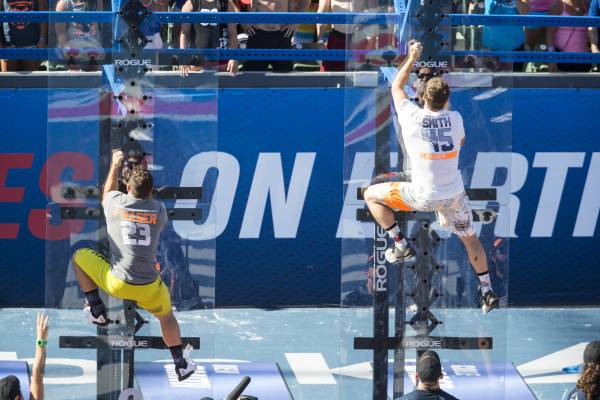 The Arguments for the Current Programming

I have seen several posts on social media supporting the programming. The recurring theme of such posts goes something like this:

No question that with time athletes can acclimatize. If you’re going to climb Mount Everest, there is a lot of adaptation work to be done. The human body is amazing in terms of its ability to acclimate to conditions. Look no further than the grueling preparation astronauts go through – up to two years of prep to get their bodies ready for the rigors of space travel.

“Volume, for volume’s sake, does not measure fitness. The CrossFit Games is seemingly upping the ante because it makes for a bigger and better spectacle each year.”

But how much time do Games athletes really have? From the Open (indoors, winter) to Regionals (indoors, May and June) to the Games six weeks later. Is that enough time to adapt to 100-degree heat? Assuming all of the athletes training for the Games can even mimic those conditions, it’s doubtful that’s enough time. Can the Canadian athletes simulate California training conditions? Aussies in their winter? Even if “Murph” had been announced at the close of regional competition, I suspect that a training regimen simulating the “Murph” conditions would have had to have been undertaken fairly quickly in order to adapt.

Here’s another way to look at it: In 2014, my coach had me do “as much outside as possible” as I trained for the Games. But when it came to the down-and-back chipper in the mid-day Carson sun, I was stunned by the heat. With a 21-minute cap, I was never so close to quitting in my life – sitting down on a med ball and calling my career over. The heat was shocking. Almost frightening. Now go back and read Emily Abbott’s interview and tell me it’s merely the athlete’s failure to take conditions into account.

But then you say, “They knew what they were getting into when they signed up.” 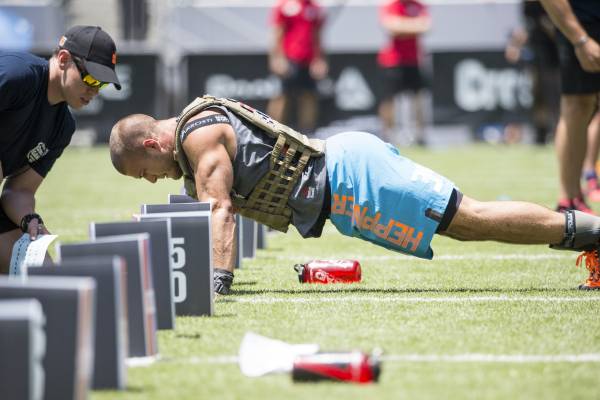 Are the athletes ultimately responsible for taking their own risks when competing?

Did they, though? I would argue they did not. This is a contest where the events are sometimes not revealed until right before they are performed. While “Murph” was announced a couple of weeks ago, “Heavy DT” was decided minutes before it was performed. Athletes can only reasonably anticipate what the competition will look like based on last year’s games. This was not that.

So you continue: “This kind of volume is nothing for these athletes. Most athletes had no trouble with ‘Murph’ or ‘Heavy DT.’ A few injuries does not point to faulty programming.”

Agreed. But volume, for volume’s sake, does not measure fitness. The CrossFit Games is seemingly upping the ante because it makes for a bigger and better spectacle each year. The concept of testing fitness has been lost in the process. Testing fitness by merely testing an athlete’s guts runs counter to the ten fitness domains. If CrossFit’s goal is to “test physical competence in each of ten recognized fitness domains including Cardiovascular and Respiratory endurance, Stamina, Strength, Flexibility, Power, Speed, Coordination, Agility, Balance, and Accuracy,” nowhere in that list does the ability to handle more and more volume and live to tell about it play a role. 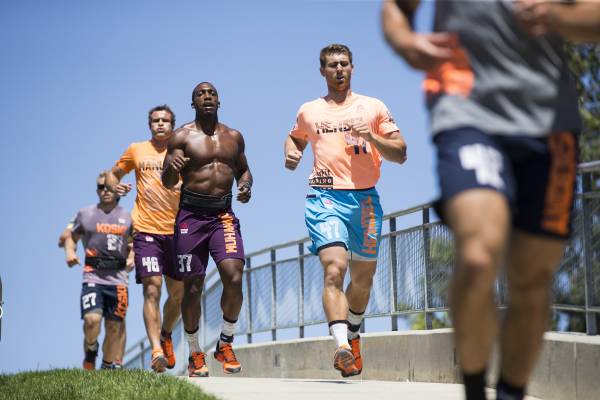 There has to be a better way of measuring elite fitness than what I saw in this year’s Games.

Come One, Come All

But you can’t have a 2km row, a true USAW snatch event with red and white lights, a standing triple jump, and skeet shooting. Because while those might test power, speed, agility, strength, and accuracy, and many of the other so-call domains of fitness, they would be boring as hell to watch. And that’s bad for business.

So, we have the CrossFit Games – the test of fitness as carnival sideshow. We’ve reached the Snake River Canyon days of the Evel Knievel legacy. And Castro is wearing fur.