There is a phenomenon in CrossFit that is remarkably consistent across all time zones, borders, and accents. It appears to be something that we, as budding athletes, either see and mimic, or it’s some weird instinctual process that we just do, until someone tells us differently.

It’s the hitch and bounce.

I have seen this in my coaching profession from new athletes who seem to be running on instinct, to seasoned athletes who should know better, to, believe it or not, visiting athletes who stop in for a WOD and do the same damn thing. So I know it’s not something endemic to my local geographic area. It’s ubiquitous. It’s ugly. It’s incorrect and it’s costing you pounds in your lifts. And, there is a relatively simple fix.

What Is This “Hitch and Bounce”?

Let’s start with what a proper clean or snatch should look like then stir in the ugliness of the hitch and bounce.

In a clean, the athlete starts with the weight on the ground (or in the hang, below, above the knees, mid thigh, etc.) and by pushing his or her feet into the platform generates power which allows him or her to translate that force into hip explosion. That hip explosion, combined with proper bar path and lat tension, will cause the thighs (in the case of the clean) or the hips (in the case of the snatch) to make contact with the bar.

In the clean, this contact with the bar is merely incidental to the fact that you are violently bringing your hips forward. The thighs are not the generator of the power. Meaning, you should not be bouncing the bar off your thighs.

The problem is that many CrossFitters completely misunderstand the reason the bar is coming in contact with the body at all. The result is that there is either a conscious or unconscious bouncing of the bar off the thighs. And what’s worse, and much more of an aesthetic assault, is when athletes bounce the bar off their thighs in a snatch.

Why Is It a Problem?

Aside from being the incorrect way to clean or snatch, this technical error is robbing you of valuable pounds on your lifts. That’s because the very moment you pause to reconnect the bar with your legs, you’ve taken your initial hip-drive out of the equation. It’s no better than an early arm bend. Remove your legs from the equation and now you’re just muscling up the weight

Examples of Good and Bad

Let’s look at an example of a successful clean. (yes, you can likely critique some parts of all of these lifts, but this is only about the hitch. We can dissect my lack of full hip opening later.) This is me cleaning 275lbs in May:

What you will notice is that while the bar hits/brushes my thighs, at no point does the momentum stop. The bar brushes my thighs because when I violently push my feet into the platform, it extends my entire body, hips and legs included, which come forward to meet the bar on its way up.

Now, look at this example of the hitch and bounce, that I call the “deadlift then bounce clean.”

Look familiar? This is masquerading as a clean, but it’s really a deadlift/hang clean. Many CrossFitters instinctively must stop and pause to smack the bar on their thighs. Why, I don’t know. But trust me, I see it everywhere.

It’s especially noticeable when the clean (or snatch) comes from the hang. In the hang, the bar should be tight against your body, with your lats tight. When you execute the lift, you push your feet into the platform hard, which launches the bar up. It is not propelled either by pulling or bouncing:

But for some reason CrossFitters feel the urge to bounce. So, even after the bar is on it’s way, following the initial momentum being created by the feet being pushed into the platform, many lifters still pause and bounce:

Gross, right? Trust me. Look around your box. On cleans, snatches, and the hang variety of both of those, you will see this hitch and bounce. Call it a pause, call it a hitch, but it’s costing you money on your lifts. Why? Because you are literally interrupting the momentum of the bar and starting over.

Imagine that you are trying to get your car from zero to sixty, and you push the pedal to the floor, then quickly slam on the brakes, then stick your feet out the bottom of the car Flintstones-style and start running to get the car going again.

It’s highly inefficient, and besides killing the momentum, it also changes the bar path, usually for the worse, by sending the bar trajectory out instead of up. Show me someone who bounces the bar off his or her thighs on a snatch and I will show you someone who jumps forward to catch it or constantly loses it in front. (Pro-tip: the bar should not be hitting your thighs on a snatch. It’s your hip pocket you’re aiming for.) 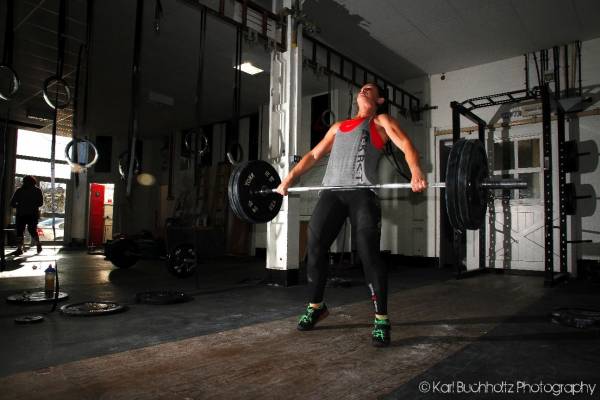 How to Fix the Problem

The most effective way to fix this issue (and potentially instantly put twenty pounds on your lifts) is to retrain your brain to think about what it is that is providing the greatest source of power in the lifts.Your hips. Not your arms, not your thighs – but your hips.

The only way to generate the most power from thee hips is to get them to explode. And you do that by fully extending them in a violent way at the right time. You can’t extract power from your hips by stopping the momentum.

Grab the bar, remove all slack, and slowly begin your ascent off the ground. (The “wind up” where people try to get a running start on the bar by removing the slack and violently yanking the bar is a subject for another day). What you need to think about is pushing your feet into the ground. Push the floor away from you.

As you get your knees out of the way and the bar passes your knees, explode. Not by stopping and bouncing the bar, but by doubling the speed and force with which you push your feet into the ground.

Although sometimes a hard cue to grasp, pushing your feet into the ground is the single most effective way to eliminate multiple issues, such as pulling early and the hitch. The only change is a change in speed and force once the bar passes your knees. You still apply force to the platform with your feet, only twice as fast and hard. This causes your hips to explode thus bringing them forward, resulting in an organic, rather than a forced, contact with the bar.