This week marked the start of a new programming scheme here at CrossFit LA. We’re trying something new and progressive, and it’s pretty exciting. Andy Petranek, the owner of CFLA, and Kenny Kane, our competition team’s head coach, have meticulously mapped out a model for precise training where workouts are now anchored by specific context. Every day is now either a training day, a competition day, or a mental toughness day. Training days – the majority of our programming – will emphasize skill, form, and improvement, working at 75-80% of max effort. On mental toughness days, we’ll learn how to keep our composure and pace through long, hard workouts, emphasizing breath. On competition days, we’ll go for it – giving it all we have for as fast as we can.

Kenny calls the programming model “mind/body” training and the idea is to evoke specific adaptations to help develop us better and more efficiently. Plenty of other strength and fitness arenas know the benefits and efficacy of this type of mixed training. I’m thrilled Andy and Kenny are wise enough to try it on us.

Today was the first day of the new scheme. It was a competition day. As happy as I am to start such intentional training, I felt completely screwed after today’s workout. As I lay on the ground staring at the ceiling after a five-round race alternating between rowing and many toes-to-bar, I thought, “Do I even know how to compete?” During the workout, I tried to keep my sense of urgency without panicking. Athletes next to me passed me, one by one, and my urgency turned into a mind-fuck. I was trying not to get mad at my lack of whatever it was that kept me from being in the lead. This was a completely new feeling that exerted more energy than probably needed to be spent. And I can’t say I totally disliked it. It just felt foreign.

And so it goes. The first questions and reexamining of my training have arisen with the new programming. And it’s only the first day. Competition day has already backed me into a corner.

Though I’ve played competitively my whole life I’ve generally fallen into two categories: I was just better where no one else was nipping at my heels or I played the role of supporter and up-lifter for everyone else. I comfortably still play the support role. I’m good at it and I love it. The neck-in-neck, who-wants-it-more role is, I’m realizing, new and uncomfortable for me. I tend to want others to feel triumphant, like I don’t need to feel that to feel successful. I don’t need to win. I’m the nurturer, the workhorse, the steady rock. And though that may just be my personality, which is perfectly fine, I’m now interested to see if I can develop a more competitive nature. 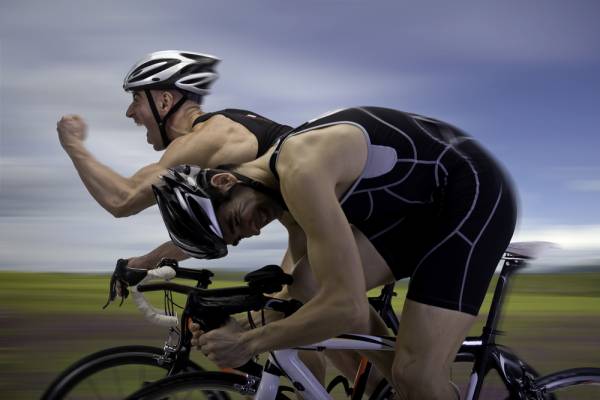 I recognize that an underdeveloped competitive nature may be rooted in fear to some degree. It’s not that I’m afraid of giving my all or not finishing or showing up day after day, which is why training and mental toughness days will be my jam. I suppose I fear driving myself so hard, driving myself off a physical cliff, and then what? If winning is not a priority for me – and I’m not sure I’m interested in challenging this part of my personality – then what is the point of red-lining? Like many athletes, I’ve been known to push myself to a very raw, emotional place after going balls out. As cleansing as this can be, it’s a rough place to go. It can dig up some shit, can’t it? I’ve cried a few times after and during classes over the years. I’ve cried a few times on the spin bike, but sometimes it was either cry or vomit, and tears are easier to clean up.

Conceptually, I know that going balls out on well-appointed days will have physiologically advantages of which I’m not even aware yet. For this, I’m excited. I’m willing to give the new programming an all-in shot for that exact reason. I’m also excited for the prospect of learning how to handle competition days better mentally and emotionally. I’ll just trust Andy and Kenny on this because it turns out that trust is a big part of our development as athletes – and anything.

Here’s a quote by coach Kenny Kane from an interview he did for Breaking Muscle a while back:

The difference between the great athletes and what makes people really good and not so good is the willingness to let go of all the fear and the failure they had in whatever practices, put that behind them, and now trust that those new skill sets (from training days) are there and they’re going to be able to allow those skill sets to come through – not cognitively, but instinctively. That’s the distinction; you’re replacing the emotional component of fear with trust.

I wasn’t expecting to get tested so early in. It’s up to me now to figure out what kind of competitor I can become. Will I ever be an at-all-costs type? I doubt it. But can I learn to compete better with myself? Can I learn to drive the line and find a place that drives me physically more than I ever have without driving me insane? This interests me to no end. I can’t wait to report how it all turns out.

What kind of competitor are you?