What Strongman Training Can Teach Weightlifters and Workers

How does functional training affect us outside the gym, particularly at work? We might learn a few of the strongmen’s tricks that will make an industrial labor job a bit easier.

With all the talk in recent years about functional training (some of it controversial), I have decided we need to look at this concept as it may affect us outside the gym. Many student-lifters have summer jobs that are highly physical in nature. They may have gotten such jobs because human resources got a look at their physical dimensions, but the lifters also desire these jobs since they often pay more than others available to untrained students. It is then important that a lifter does not end up with an injury that could be prevented if proper lifting technique was used on the job. Lifters know how important technique is in the gym, but what about elsewhere?

Even if they do not have physically demanding jobs, everybody who has weight trained long enough that the physical effects on their bodies have become noticeable will sooner or later get requests to move something heavy or lift something out of the way. I guess this comes with the territory. Your muscular frame is a constant invitation to such requests. However, while well-coached lifters are careful not to make any technical errors in the gym, they are not immune to such mistakes on the job.

Despite the ever-increasing mechanization of construction and similar industries, there are still times when the only way something can be moved is with good, old-fashioned elbow grease. Some people might say that the best way to learn how to handle heavy materials on the job is by experience. The worker will learn what works and what does not. While this sounds like good advice, often it does not work so well in practice. Workplace downtime injuries caused by improper lifting technique are still common.

All lifters are familiar with proper positioning while attempting a snatch, clean and jerk, squat, or deadlift. They know the proper leverage is vital to making a difference in whether a lift will be successful or not. But these very same lifters will then go to their summer jobs and forget all of what they have learned in the gym about lifting. The man who can clean 300lbs by using as much of his leg power as he can in the gym will often attempt to pick up a heavy crate by bending over and trying to reef on it with his arms.

What Weightlifters and Workers Can Learn From Strongmen

Workers and weightlifters alike can learn a lot from the strongman competitors. The strongman events all involve lifting loads similar to what you might find in an industrial setting – inconveniently shaped objects with little opportunity for gaining purchase. Few industrial objects are as conveniently shaped as a barbell. As such, we might learn a few of the strongmen’s tricks that will make an industrial labor job a bit easier:

This is the first thing you as a new lifter learned in the gym. You can lift a lot more with your legs than with your arms or your back alone. The same idea holds at work. Before attempting to move anything heavy, think about how the legs can be utilized before you get the other weaker muscles involved. 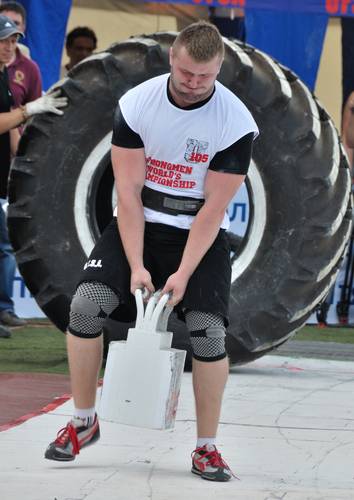 When you do have to get your back into an effort, remember what you learned in the gym – tighten up the spinal directors and do a Valsalva. This stiffened spine not only prevents spinal injury, but it also allows more weight to be lifted or any weight to be lifted easier. Remember what you learned about the transfer of forces. Your back works as a lever and only a rigid lever is useful. Flexible ones are useless, and dangerous.

Another helpful to do when using your back is to tuck your chin in when doing so. When the hands move forward towards an object there is a tendency for the chin to follow, moving forward. This results in a loosening of the upper spine that in turn encourages the buttocks to move backwards and upwards as the load is taken. This will then result in poor leverage, compromising the whole effort. But a tucking in of the chin encourages the opposite. Try it the next time you lift a heavy box and see the difference.

All lifters are aware of the importance of a solid grip. Since the barbell is usually placed below the palms it is only the fingers that are really worked. It is different on the job, but different in a way that will help you. There you can use your palm as well. In manual handling, if you use only your fingers those will tire quickly and this in turn will create tension throughout the arms resulting in eventually having to drop the load. Try to use as much of your hand as possible, getting your palms involved as well as your fingers. That way the force per square inch on your hands will be less, making the job easier.

When carrying objects, try to keep the arms as straight as possible and as close your body’s center of gravity as possible. Anything else will increase tension on the elbows and shoulders, resulting in early fatigue. You know this from your weightlifting training, so use it on the job as well. And use it the same way. You will lose all leverage the further your arms and the load are from your center of gravity.

Before lifting a heavy load, try getting your feet in the position you want them after you have secured the load and are ready to move it. If not, you may end up torquing the joint as you try to turn left or right. And again, keep the load as close to your center of gravity as possible. 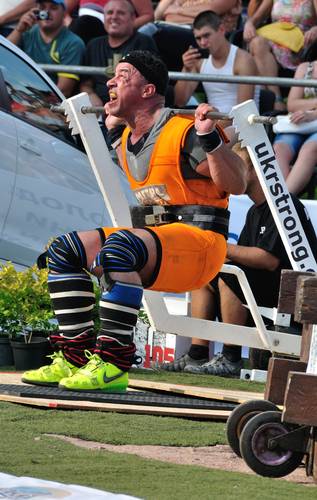 In weightlifting, we learn to use our bodyweight to counterbalance the barbell. When reaching the top of our snatch or clean, the extension of our back counters the tendency of the barbell to fall forward. The lifter has to counterbalance this tendency of the barbell with his bodyweight, and he does this by moving his back rearward in order to lengthen his body leverage. Combatative athletes also know this. Their throws or punches are a lot more effective if their bodyweight is used to add to their own force. Try to determine how your bodyweight can be utilized in the various jobs you will have to perform, especially the repetitive ones.

In the weight sports, it is axiomatic that all of the lifts are very symmetric ones. The name of the game is to use the left-side body is much as the right-side. This will result in a technically efficient lift. And even more importantly, it will prevent injury. If heavy deadlifts are made with more right side than left side, you can be sure that an injury will soon follow. Keep this in mind on the shop floor. Even if you are only lifting small loads, it is still a good idea to alternate your hands when lifting. As any bodybuilder knows, this will result in symmetric muscular and strength development. On the shop floor it will also result in less fatigue at the end of the day. And it is fatigue that is the enemy of us all, to sort of paraphrase Vince Lombardi (“Fatigue makes cowards of us all”). Don’t let your dexterity (or sinistry) tire you out prematurely.

You have to remember that when you’re on the job, the name of the game is not to lift the most (like it is in the gym). What is necessary is to be able work at full tilt for a full shift and still be ready for tomorrow’s shift. That will be far more impressive to the foreman. And I guess that is what you call functional strength.