What You Can Learn From Chuck Liddell

I recently helped out at a private Chuck Liddell seminar. Standing there, watching Chuck made me see some things very clearly about training and progress, and I want to share them with you.

I was recently asked to help out at a private Chuck Liddell seminar held in Melbourne. It was different to the normal kind of events that top names put on – very small group, lots of time taken to ask and answer questions, and genuine personal involvement from Chuck. Standing there, watching Chuck do his thing after I had prepped everyone made me see some things very clearly.

For starters, most probably don’t know this but Chuck was a former NCAA Division I wrestler. For people not familiar with the world of wrestling, that is a pretty big deal. And believe it or not, being so good at wrestling has a massive payoff to his stand up striking. See, most people are very tense when they fight. This slows them down both physically and mentally. While tension can be a basis for strength, it also prevents the development of speed. In other words, tight fighters are slow, weak fighters.

What allows Chuck to be so relaxed in his striking is that he is a superb grappler. Because he doesn’t fear grappling at all he is able to work to his maximum on his striking. Now, I’m not going to try to work on technically correcting the Iceman as he has had a great result, but there have been a few times when his style of striking was exploited. But he has remained true to the style that won him so many fights – after all, why try to fix a winning formula? Of course you improve, you refine and broaden your approach, but every successful athlete has a solid “go to” place for his or her game and staying close to it allows you to stay successful.

What Chuck taught at his seminar probably caught everyone off guard. I know was caught off guard as with limited space I focused on a warm up based around the needs for stand up fighting, not for grappling. But guess what he taught? Yup, grappling.

In fact, Chuck showed quite clearly how he based his game not on striking or on avoiding the grappling aspect of MMA, but on how to use grappling skills to keep the fight standing to draw your opponent out of their comfort zone. And that’s an interesting thing – he used a strength of his to defuse his opponent’s strength. He went so far as to say, “Just because someone starts grappling with you doesn’t mean you have to grapple back.” And he then showed drills to keep the fight standing and continue on your terms, not the opponent’s.

And all that got me thinking – how many people are trying to train on a program devised for someone else? And how much better could their results be if they found their own way? 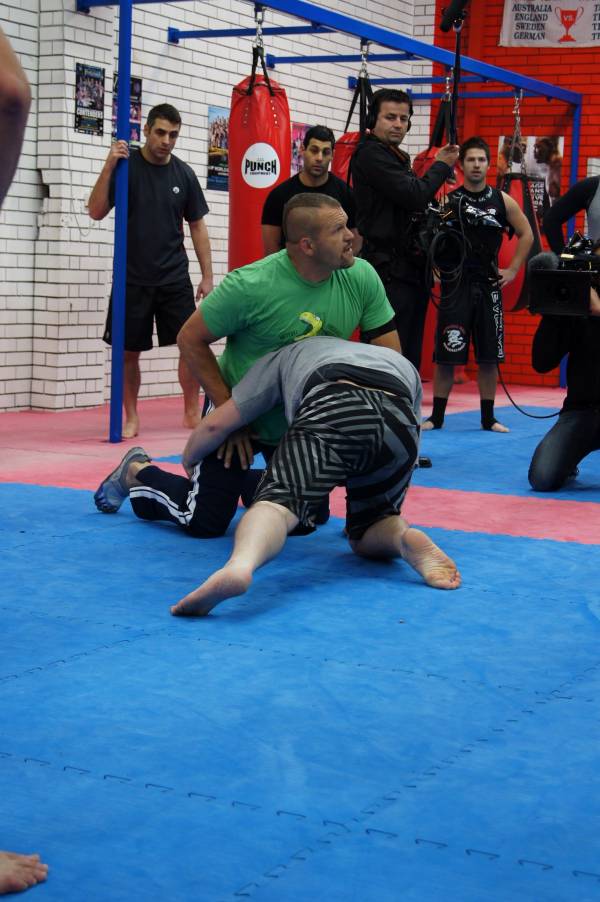 The second one in particular made me realize what a can of worms this could be. The reality is the vast majority of people would be better off hiring out the coaching aspect of their training. Most people lack the knowledge, skill, and objectivity to train themselves effectively. But for those who are skilled, self-aware, and honest enough to create their own programs there is a lot to be learned.

Everyone has exercises that just click for them and those that don’t. For me, in the bad column are front squats. The front squat has become the Holy Grail of lower body strength work over the last few years for good reason, but they just hurt my knees. No matter what, whenever I start getting serious about front squats my knees ache. No amount of rolling, stretching, or anything else fixes it other than not doing it anymore.

Conversely, I can work myself into the floor with back squats done in lifting shoes with no issues. Likewise I can overhead press till the cows come home – either single or double kettlebell for low reps or high volume, or even high volume, high load is no trouble. But dips – I don’t do dips. Ever since one of my ribs got dislocated a few years ago dips feel like someone is trying to crack my sternum apart. And standing barbell curls? Forget it. They make my elbows feel like they’re about to explode. But incline dumbbell curls are a thing of beauty and joy if I am actually in a “gun show” kind of mood.

So imagine I designed a program for myself, to attack my weaknesses. You’d think it should include dips and front squats – after all, plenty of top coaches recommend these movements as ideal for strength and muscle gains. But they don’t have my body. They’re not working with guys who are forty and have a string of terrible injuries that usually have people quit training altogether. And I know from painful experience that if I actually did put together a program that revolved around front squats and dips I’d stick to it for about two weeks at most before pain stopped me. And how effective is that going to be for me in the long run?

Because training is all about one thing – adaptation. And despite what most tell you, changing workouts to stop yourself from adapting to them is the exact wrong thing to do. Because adaptation to a given demand is the way we keep getting stronger and fitter. You don’t see runners start to get faster and quit running and switch to cycling, do you? Do you stop punching to get better at punching? 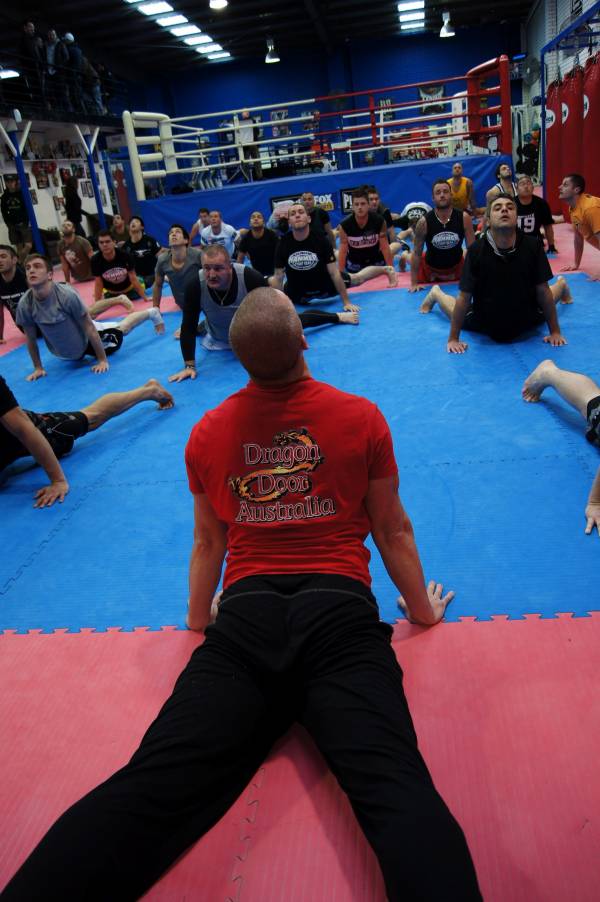 I often get asked how come I only need to train three to four times per week to stay lean and strong. The answer is because I am often lifting as much as four times what my clients are – literally doing a workout that is four times more effective than them doing the exact same workout. For example, one of the most famous kettlebell programs known is the Program Minimum from Enter the Kettlebell. It is like a quick-start program for someone who has limited training background and is unfamiliar with kettlebells. The program is designed for someone new to exercise and to break him or her into using kettlebells. I actually follow my own version of this for periods each year. Except my version goes for an hour instead of a few minutes and I use kettlebells totalling up to 64kg instead of 16kg for it. So given I lift up to four times as much and perform this skill for up to twelve times longer, who do you think is getting more skilled at the movements? And which approach do you think has a better effect?

In the RKC we talk about how we seek to become experts at our core lifts, to explore the elements of deep skill within them. Not only that, but we also describe strength as a skill. If that is the case then the more skill I have in a given lift, I will demonstrate by being able to perform it with a bigger load. So while we chase this increasing skill in our six core lifts we essentially have a lifetime of possible progress – much like Milo and his bull – we can simply add more weight to our lifts and continue progressing.

But at some point there will come a plateau and that is where the skill of being able to stick to your individual fight plan will come in. Some will be best served by removing difficulty and going back to simpler exercises they can push more load on, such as all my work with the swing and get up in the Program Minimum recently. Others will benefit from changing from one movement variation to another, such as from straight bench press to overhead presses. And even within those variations will have favorites that work well and others that don’t work so well. Along with that, knowing which drill to use at what time is a major factor – dumbbell pressing will have more value for shoulder health, while barbell pressing will allow you to build more maximal strength – all the while sticking to a press because that is the lift we are always seeking to increase.

Learn from Chuck – find what works best for you. This doesn’t mean stick only to your favorite exercises. This means find the exercises that benefit you the most and don’t hurt you in any way. You will likely find that having a coach on hand to help you will be enormously beneficial. Someone who has travelled the path before you, perhaps many times, knows what is needed, and can see how you react to training is possibly the most valuable asset you can have in training.