I have been living a fairly strict paleo lifestyle for over three years. Originally, the idea was to begin using food as medicine and my initial approach was quite restrictive.

But once I realized that paleo is a lifestyle based around a larger movement, my view of food and life became significantly easier to transition, with thoughts of restriction never coming into play.

In the beginning, I often focused on making paleo-appropriate substitutes for my favorite foods: breads, pasta, and cookies. I still do miss a few things, and many are based around the memories tied to them. One is my grandmother’s raisin rice pudding. Every time she knew I was visiting, she would make one bowl for me to eat with her and one to take home.

Recently, while playing in the kitchen, I was able to recreate the memory of Grandmom’s rice pudding, using a paleo-perfect recipe with chia seeds. The memories were also included for free.

The Power of Chia Seeds

Chia seeds are an athlete’s dream and a paleothic eater’s nirvana. They are gluten-free, low-calorie, nutrient-dense, and loaded with omega-3, fiber, and protein. Not to mention, they are also a strong antioxidant that supports bone health.

“[Chia seeds] are often used as an alternative to carb loading in the athletic community and touted in studies as aiding athletic performance.”

Many studies claim that chia seeds promote a feeling of fullness after eating, which helps to promote weight loss. The seeds are known to absorb water and expand in the stomach to promote the feeling of being full. They are also used as an alternative to carb loading in the athletic community and touted in studies as aiding athletic performance.

From a food is medicine perspective and so much more, this little seed is cause for celebration. Celebrate the Halloween season and enjoy making healthy memories with these chia seed pudding recipes! 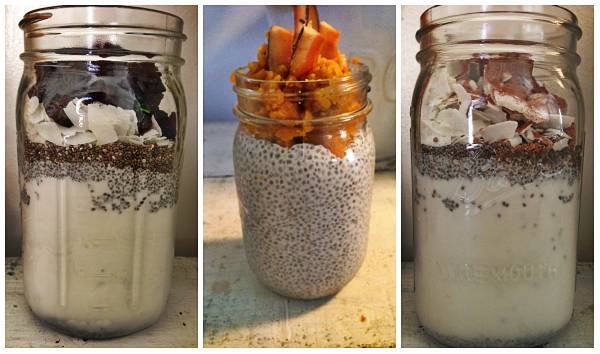 Substitute raisins for the pumpkin and add a teaspoon each of vanilla, honey, and cinnamon for a paleo-perfect Grandmom’s raisin pudding. Add raisin for garnish if you like, with a sprinkle of cinnamon.

V Capaldi, aka PaleoBOSS Lady™, has a master of arts in psychology with a focus on community. She considers herself a miracle since self-healing from secondary progressive multiple sclerosis in 2012 using food and movement as medicine. In addition, she is 100% Italian, from Philadelphia, and born under the sign of Taurus, all earning her the title of a BOSS Lady.

By questioning the status quo, V informs the community how to rewrite their narrative on life, healthcare, and living.  She is the Tony Robbins of the Food Is Medicine movement, creating conscious awareness through life experience and self-empowerment.

V has been an advocate for the disabled and started filming her life since 2009 in an effort to create awareness. With social media and blogging at her website, PaleoBOSS Lady lives to inspire, engage, and empower others to question the status quo, create their life narrative, and become their own miracle.